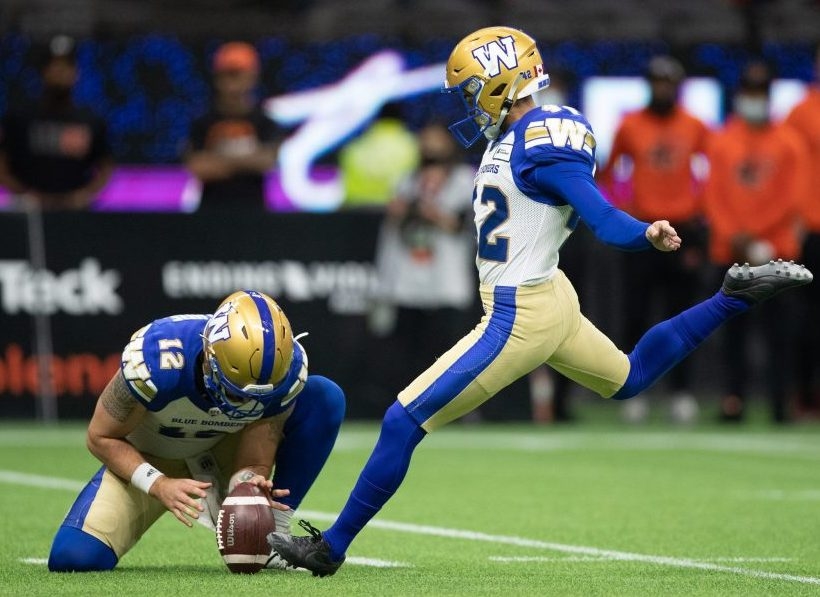 In radio or TV news, the “kicker” is a story that provides a light ending to what’s often a heavy newscast.

In football, of course, there’s not supposed to be anything light or humourous about the kicker.

His job is singular: nail down a victory by pounding the ball through the uprights, regardless of all the trials and tribulations that went before.

That would imply the Bombers are still looking for another candidate to replace Sergio Castillo, the unofficial MVP of last year’s Grey Cup.

They already have two: incumbents Marc Legghio, the Canadian coming off his first year as the punter, and Ali Mourtada, the product of Sierra Leone whose nomadic pro career brought him to the Bombers for five games last season.

The Bombers went through four field-goal specialists in all, eventually striking gold with Castillo.

But after a perfect five-for-five performance in the Grey Cup, Castillo signed as a free agent with Edmonton, landing the ball back in the court of the incumbents, for now.

Both struggled at the tee, Legghio going 5-for-8 before focusing on punting, Mourtada 8-for-15.

You wouldn’t think the Bomber brain trust would want to risk another season of wobbly kicking, just hoping somebody gets it right.

“We’re not hoping,” O’Shea said. “They left our team with specific instructions and a handle on what they needed to do to improve for their teammates. And we have no doubt in our mind that they’re doing that.”

GM Kyle Walters says players usually improve from their first to second year, and kickers are no different.

“But… we certainly will have some competition heading into training camp at that position,” Walters said. “We’ve talked at length to a lot of kickers. We will not leave any stone unturned.”

STRATEGY SHIFT FOR DRAFT
O’Shea and Walters were speaking via Zoom from Toronto, where the top draft-eligible prospects will spend the next few days performing feats of speed, strength and agility with the hope of starting pro careers next season.

For the Bombers, this year’s draft marks a departure from the past, when they were always focused on re-stocking their offensive and defensive lines.

“Regardless of how the roster looks each year, we really will give the line of scrimmage a thorough look,” Walters said. “But we’ve also got to the point now where we like to draft the best football player, not position-specific. So we’ve gone away from that.”

That said, Walters likes what he sees from the O-line group gathered in Toronto this week.

“But that will be sorted out this week.”

Walters says there’s a deep crop of linebackers and defensive backs in the draft, too, and some high-end talent at the skill positions.

Meeting them all in person rather than virtually, like last year, is a major improvement for all teams.

ELEPHANT IN THE ROOM
The coaches, GMs and league officials have put their foreheads together this week to discuss potential rule changes that would make the game more exciting.

Walters was relieved to see the prospect of switching from three downs to four wasn’t on the table.

Walters stopped short, though, of declaring three downs a sacred cow or the hill to die upon when trying to generate more offence.

Most GMs and head coaches going through the Zoom room wouldn’t touch the issue, saying they’re willing to look at everything.

Aside from Walters, those who at least expressed support for the status quo included the Montreal tandem of Danny Maciocia/Khari Jones and Toronto GM Pinball Clemons.

“All the conversation when I first arrived here was the tangible difference that three-down football makes and the excitement,” Clemons said. “And for me that’s not gone.”

O’Shea, who’s been involved with rules committees for years, says he checks his linebacker mentality at the door.

“I try to have the integrity of the game and the CFL in mind,” he said. “Not put your own agenda forward. Your job is to listen and participate with the committee, not dig your heels in and show up with a predetermined set of answers.”

TWO SIGNED FOR CAMP
While the draft will bolster their Canadian depth, the Bombers will look to their U.S. scouting to fill holes at receiver and defensive back.

They announced the signing of one of each on Thursday.

Antonio Nunn, 25, is a 5-foot-11, 204-pound receiver out of the University of Buffalo who attended training camp with the NFL’s Atlanta Falcons last year.

Donald Rutledge, Jr. (6-foot-1, 210 lbs) is a 24-year-old DB who’s had tryouts with Indianapolis and Arizona since leaving Georgia Southern.

The Bombers will hold four free-agent camps next month, in Tampa, Houston, Ft. Worth and Atlanta.