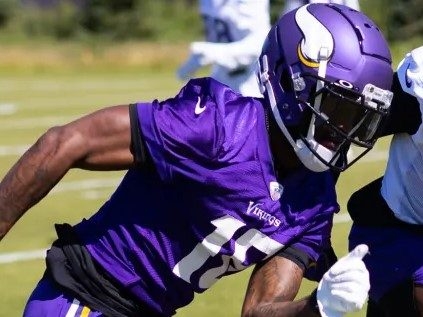 If the latest player signed by the Winnipeg Blue Bombers makes a career in Canada, you could add his name to the list.

The Bombers on Monday announced the signing of receiver Whop Philyor. One line from the news release jumped off the page.

“Mister Elias De’Angelo Philyor, goes by childhood nickname, Whop, based on his affinity for Burger King Whoppers,” the release read.

Of course this demanded further investigation.

So on Tuesday I reached Whop Philyor at his home in Tampa.

Before we got to the story behind his name, we talked football, and one thing quickly became clear.

This 23-year-old fits the bill Bombers scouts look for, after they make note of a player’s talent: he lives and breathes the game.

The former Indiana Hoosiers star hasn’t played a game since the 2021 NFL pre-season, when he suited up for all three exhibition games with the Vikings, catching three passes for 54 yards.

“Obviously it’s going to be faster because it’s the NFL,” he said. “I wouldn’t say it was easy to adapt to, but it was adaptable. It was a good thing. Great experience.”

When the entire season went by without another chance and the calendar flipped to March, Philyor’s agent told him there was another option: the CFL’s Blue Bombers.

He was laughing, something that comes easily for Philyor.

So does catching the ball.

His last two seasons at Indiana, he hauled down 124 passes for 1,497 yards and eight touchdowns.

Going into the NFL Draft, college football analyst Jim Mora described him as a tough and gritty “high-octane player” who’d be ideal in the slot position.

“You just don’t have a kid that’s that productive at a school like Indiana that doesn’t go on and play in the NFL,” Mora, a former NFL head coach, concluded.

Philyor wasn’t drafted, and his next shot at pro football will bring him to training camp in Manitoba.

It’ll be an adventure, because Philyor knows as much about the Canadian game as he does about Winnipeg.

“Is it close to Niagara Falls?” he asked. “That’s the first thing I always think about when somebody brings up Canada.”

Informed he’d have to drive about 20 hours to get to Niagara Falls, Philyor said he’d pass.

Informed he’ll have to run a field measuring 110-by-60 yards, he got excited.

“Dang, that’s gonna get you in some good shape,” he said. “You gotta be ready to run, baby.”

He didn’t know there would be a 12th player on defence trying to stop him.

“But I know about the big field,” he said. “The end zone is huge, right? Real big. That’s more space to score touchdowns.”

I thought there was one other not-so-small detail he should know.

“It’s three downs?” Philyor repeated. “Oh, I didn’t know that. That’s crazy. You get three plays? But first down is the same 10 yards, right?”

Not that he’s done zero research.

“Isn’t it called like the Grey Cup or somethin’ like that?” he asked. “I know the Blue Bombers are back-to-back (champs). I’ve been lookin’ at my history for a couple of days now.”

No doubt it’ll be football shock when Philyor arrives, maybe even a touch of culture shock: one of his favourite places to eat, Chick-fil-A, doesn’t have a location in Winnipeg.

Which brings us to his name.

Turns out Philyor’s dad always took him to Burger King, and soon the kid wanted not a child-sized burger, but the Whopper, like his father.

“I’ve been called Whop since I was about seven years old. My friends, they’ll call me Cheeseburger sometimes.

“But I’ve always been Whop.”

Even if he doesn’t eat as many as he used to.

There would be at least one person who wouldn’t call him that, if she were still alive.

Philyor’s grandmother was the one who named him Mister.

“She gave me that name so every time somebody was to call my name or talk to me they would be giving me respect,” he explained.

Philyor has grown to love his original given name, too.