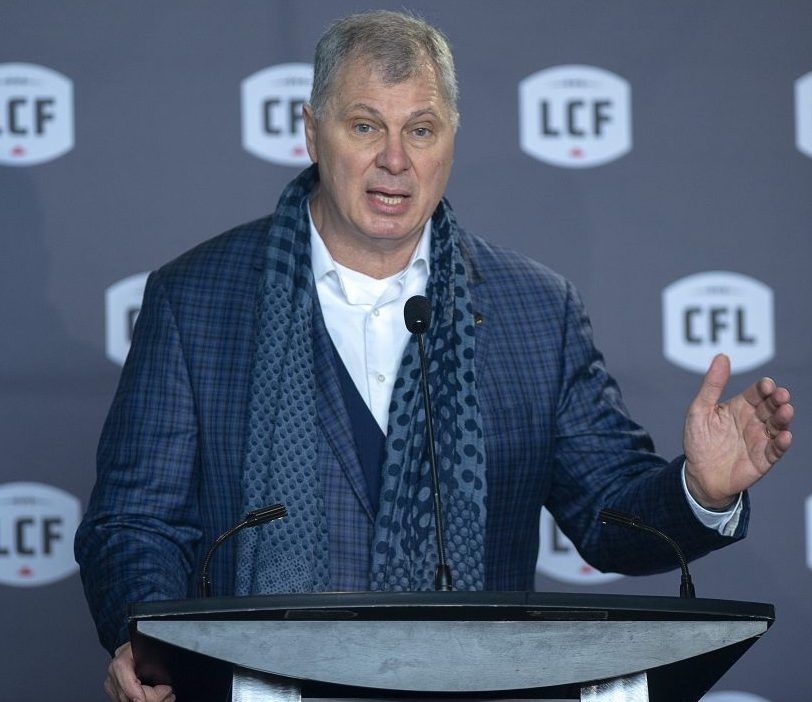 He calls it Randy’s Road Trip, an off-season, cross-Canada jaunt designed to drum up some headlines for three-down football.

A few stops in, Randy Ambrosie is threatening to cause an outbreak of road rage.

In Calgary and again in Regina, the commissioner has been asked about the ugly rumour making the rounds: that the CFL will actually consider a move to four downs.

The former offensive lineman handles the question like a politician fielding a hot-potato issue on the election trail.

Why can’t the game’s Grand Poobah just pancake the idea?

Instead, he keeps whiffing on it.

If Ambrosie had blocked like this back in his playing days, he would have cost a few quarterbacks their careers.

The stakes are even higher now.

If the CFL moved to four downs, it may as well just pack up its yardsticks and chains and sell ’em on eBay, along with its soul.

Just change the name to NFL-Lite. Then be prepared to shut out the lights for good.

Because if there’s one thing loyalty doesn’t stand for, it’s a direct slap in the face, followed by an illegal block to the knees.

That’s how the vast majority of long-standing fans would feel about the Americanization of the Canadian game.

So what does the commish do when asked about the idea at his stop in Calgary the other day?

He rambled on about the league’s Top 3 priorities, for starters.

One is negotiating a new mutually beneficial CBA with the players union.

Two, using a “product review” that’s already underway to build “the funnest, fastest, most dynamic game of football on the planet.”

And three, grow the fan base.

Then Ambrosie added this: “You have to, for your sanity and for the sake of relationships with all of our key stakeholders, stay away from those specific solutions because they drag you down a rabbit hole and they never lead to anything good.”

What in the name of Annis Stukus does that mean?

Does the “stakeholder” and “relationship” Ambrosie referred to involve Genius Sports, by any chance?

Sportsnet this week reported that Genius is pushing behind the scenes for a move to four downs. That’s been refuted.

But you can’t help but wonder if Ambrosie is worried about placating the geniuses at Genius, or somebody else, more than placating the people who’ve been buying the tickets and jerseys and travelling to Grey Cups all these years?

Days later, Ambrosie took his travelling road show to Regina, where he had no trouble discussing a “specific solution” or two, without concern for “rabbit holes” leading to no good.

He raised the possibility of decreasing the penalty for offensive holding from 10 yards to five. Hogs league-wide are drooling over that one.

He told a crowd of fans he and Stampeders boss John Hufnagel discussed moving the hash marks closer together to potentially make things easier for offences. That would expand the narrow side of the field and shrink the overly wide side when the ball is scrimmaged on a hash mark.

But when a fan, obviously concerned about the four-alarm blaze-in-the-making, asked about adding a down, Ambrosie suddenly pulled up his muzzle again, spewing out a word salad so convoluted Einstein would have trouble sifting through it.

“There’s no hidden agenda here,” the commish continued. “There’s no secret society of CFL people that are organizing to attack our game. There actually is a group of phenomenally talented coaches and presidents that are deeply committed to our league, and the process that I’ve described is genuine, authentic and real.”

There still wasn’t anything resembling a “hell, no!” in there. Nor was there one coming.

“So there’s no secret agenda,” Ambrosie repeated. “We’re going to bring super-smart people into the room and have them have that conversation about all the things that we might do to make sure that when Rider fans come to Rider games, they leave thrilled because they saw an amazing, entertaining game.”

This, despite a survey by polling company Leger a couple months ago that shows most CFL fans want exactly that.

If the commish can hold court about holding penalties and hash marks, why can’t he be up front about the downs?

Ambrosie will bring his dog-and-pony show to Winnipeg next month – April 12, to be exact – so that’d be the time for a reminder from the Manitoba capital.