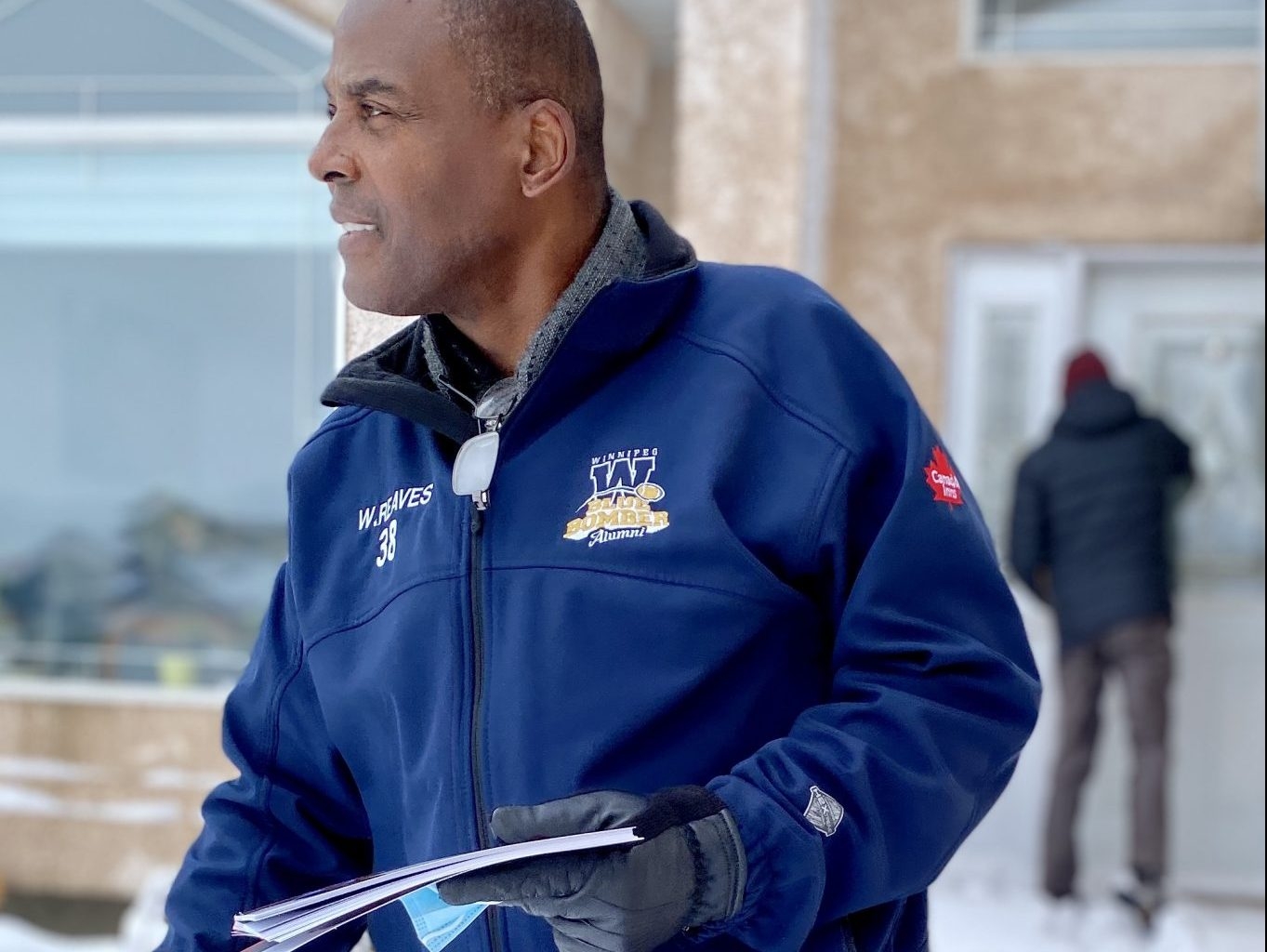 You’ve heard the term “political football?” It’s about to get real on the Manitoba electoral gridiron.

A great Winnipeg Blue Bombers running back from the 1980s and a pretty good offensive lineman from a decade ago are likely headed for a voter showdown.

Call it the Fight in Fort Whyte, complete with some trash talk.

Willard “The Sheriff” Reaves, a Grey Cup winner who ran behind his “white horses” in the 1980s, will be the Liberal Party candidate.

And in this corner, wearing the banner of the incumbent but beleaguered Progressive Conservatives, is Obby “The Shawarma King” Khan, the lineman who became a Winnipeg restaurateur after his playing days.

Khan doesn’t have the PC nomination, yet. But so far he’s the only one with his hat in the ring.

“It is unique,” Reaves, 62, acknowledged. “A good, old-fashioned scrum. Obby is going to block for me and I’ll just run right through the hole.”

Reaves chuckled as he said it, but his reaction to Khan joining the PCs wasn’t all smiles.
Hours after Khan’s plans went public last week, Reaves issued a news release saying he was “extremely disappointed” in his fellow Bomber alumnus, running for a party that’s done “so much damage to the province.”

“He’ll have to answer to the voters… good luck with that,” Reaves’ statement read. “If Obby blindly supports that then he’s not the kind of person a lot of Manitobans thought he was.”

A former CFL Most Outstanding Player and Blue Bombers Hall of Famer, Reaves was only too happy to expand on those comments in an interview with the Winnipeg Sun .

Reaves, who came to Winnipeg from Arizona, says he’s heard enough horror stories from his wife, a nurse, to know how badly the system is broken.

He pointed to his background working in the justice department, his work as a public speaker and his efforts with local charities as paving the way for him to run for political office.

“This is real,” Reaves said. “This is not, ‘I’m just going to occupy a seat, but I need to take care of my restaurant.’ Yeah, we both played football. We both had careers after football. Mine is in justice. His, the restaurant business. He’s still making money from the public. I’m giving back to the public.”

The last person to hold the seat in Fort Whyte was Premier Brian Pallister. His resignation forced a byelection.

The only reason the PCs chose Khan, Reaves says, is to try to match his own popularity.

Khan, asked what it’ll be like if he goes up against the Bomber legend in an election, was equally quick off the ball.

Scoffing at the notion his only qualifications are his football career, Khan pointed to his charity work, his entrepreneurship and his promotion of the local economy through his Good Local initiative.

The Ottawa product calls politics a natural progression. A chance to do something even bigger and better for the community he’s made his home.

“A lot of people want to build it up as Bomber vs Bomber,” Khan said. “Sure, that’s a fun story. But I’m asking people to look at what I’ve done since I’ve been here, all the way through.

“There’s more to me. I’m not running on being a football player.”

As for Reaves’ trash talk, Khan initially shrugged it off.

“Your opponents will always say something about you,” he said. “It’s true on the football field, it’s true in business, it’s true in politics. I don’t care about my opponents and rhetoric. I don’t think that’s the way a great leader or a positive leader wants to lead.”

Khan says he prefers to take the high road, not start slinging arrows.

Of course, politics isn’t always clean, anymore than life in football’s trenches is.

Khan couldn’t resist one poke at one of the Bombers all-time greats.

“The Liberals gave him the seat,” he said. “I have to earn my seat.”

Reaves jumped all over that like it was a loose football in the end zone.

“That statement just shows me he doesn’t know what he’s talking about,” Reaves said. “They didn’t give me the seat. There just wasn’t a challenge.”

Khan doesn’t have a challenger so far, either.

By the end of our separate conversations, both Khan and Reaves sounded a bit more like respectful opponents.

“Politics does not have to be so damn tense,” Reaves said. “It will definitely not get nasty. That’s just fuelling people so they can have something to report. I have nothing bad to say about Obby. I’m not going to get into the tit-for-tat type thing.”

“If Willard wants to have a bench-press competition, I’m down for that,” the lineman said. “Maybe we could raise some money for charity.”

Reaves figures his leg strength would come in handy at the Legislature.

“I’ve gotta carry all these people,” he said, laughing. “Liberals, NDPs and PCs.”