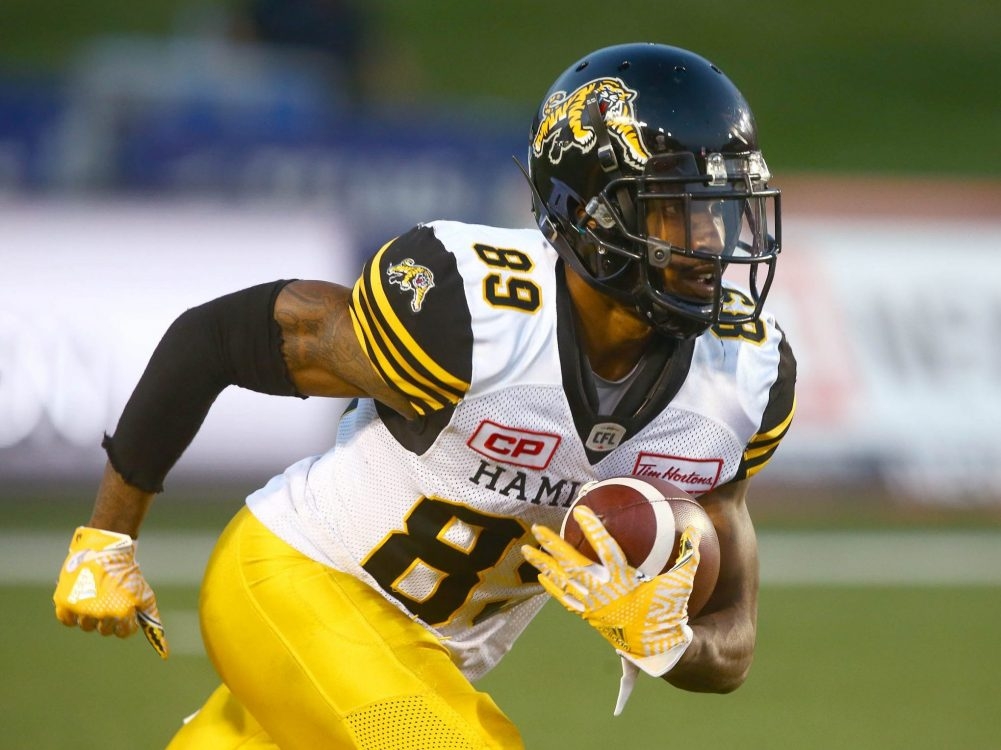 If Jalen Saunders spends the next few weeks draped in bubble wrap and hiding in his central California home, waiting for training camp, you couldn’t really blame him.

Not after what he’s gone through since bursting onto the CFL scene as one of the really good, young receivers, five years ago.

“It’s been a quite a long road just to get back,” Saunders, the latest Winnipeg Blue Bombers signing, was saying in a conference call on Monday. “It’s a blessing… to say the least, considering I almost had a fatal car crash last year around this time.”

The crash is only the most recent stroke of bad luck to stalk Saunders.

The fourth-round NFL draft pick in 2014 was well on his way to becoming one of the CFL’s top receivers in Hamilton, four years ago.

Coming off a 1,000-yard season as a three-down rookie in 2017 – one of his quarterbacks was Zach Collaros – Saunders suffered a knee injury that cut his 2018 season in half.

He still hauled down 45 balls for 739 yards in just nine games.

“I didn’t think it was as bad as it was,” Saunders said of the injury. “So I delayed my surgery to when I got back home and got a second evaluation from my other doctor, and it (was) worse.”

After surgery, Saunders was set to make a comeback with Houston in the XFL, as former Tiger-Cats head coach June Jones drafted him.

Recovered and ready to make his XFL debut, the league folded a few games into the 2019 season.

“I’m just in shock,” he said. “I was ready to go play a game. I was prepping for the week and the next thing you know, they’re like, ‘The season’s going to just come to a halt.’ And I’m like, wow. Interesting.”

So it was back to the CFL for 2020, Saunders signing with Ottawa.

We all know what happened to that season.

By this point, people who aren’t as wired for football as Saunders is might have started looking for another line of work.

“I come from a football family,” he explained. “It’s a norm for us to just keep doing football. If I did stop playing, I would still be in the coaching atmosphere. This is just what we do.”

Saunders helped his father and uncle run a football camp for kids in Atlanta and bided his time for the 2021 season, signing with Ottawa again.

But if it wasn’t for bad luck – well, you know the rest.

“I was in Atlanta taking my cousin to the airport from my grandmother’s,” he began. “I was on a two-lane highway and a drunk driver was asleep… and I ended up running into him and a car from behind me hit me. It was pretty crazy, to say the least.”

Saunders posted photos of himself and his mangled car on social media at the time.

Somehow, he escaped the wreck with a fracture in his hip.

“Thank god I’m still here to even just be on this phone call with you,” Saunders said. “I’m definitely living a second chance.”

Another season written off, Saunders recast his sights on 2022.

Enter the Bombers and Collaros, his old quarterback from the Ticats.

“I first reached out to him,” Saunders said. “And I was like, ‘What do you got going on up there in Winnipeg?’ He was like, ‘Yo, come sign up here. I’d love to play with you again.’ And this is the final result.”

“This” being a two-year contract with the two-time defending Grey Cup champs.

It’ll have been nearly four years between games for Saunders, the last time he suited up was in the Hamilton-Toronto Labour Day game in 2018.

But he says it never even crossed his mind he may have caught his last pass.

“No one told me I could not play anymore,” he said. “It’s just more, ‘You just need to get back healthy.’ So I took the time just to get my body right, get back in super shape. I wanted to make sure everything I had happen, I didn’t want to have happen again.”

Saunders says he’s fully recovered, as fast and agile as ever.

Besides, we should never count out someone from Central California.

“That’s how we rock ‘n roll out here,” Saunders said. “We didn’t grow up near the beach and have all that luxury stuff.

The Bombers hope Saunders and fellow free-agent signing Greg Ellingson can help make up for the stinging loss of league-leader Kenny Lawler.

Now he’s just got to make it to training camp.

“This year, fingers crossed, been praying and hoping nothing strange or weird happens, no pandemics or anything,” Saunders said. “Hopefully these next three to four weeks go smooth, you know?”