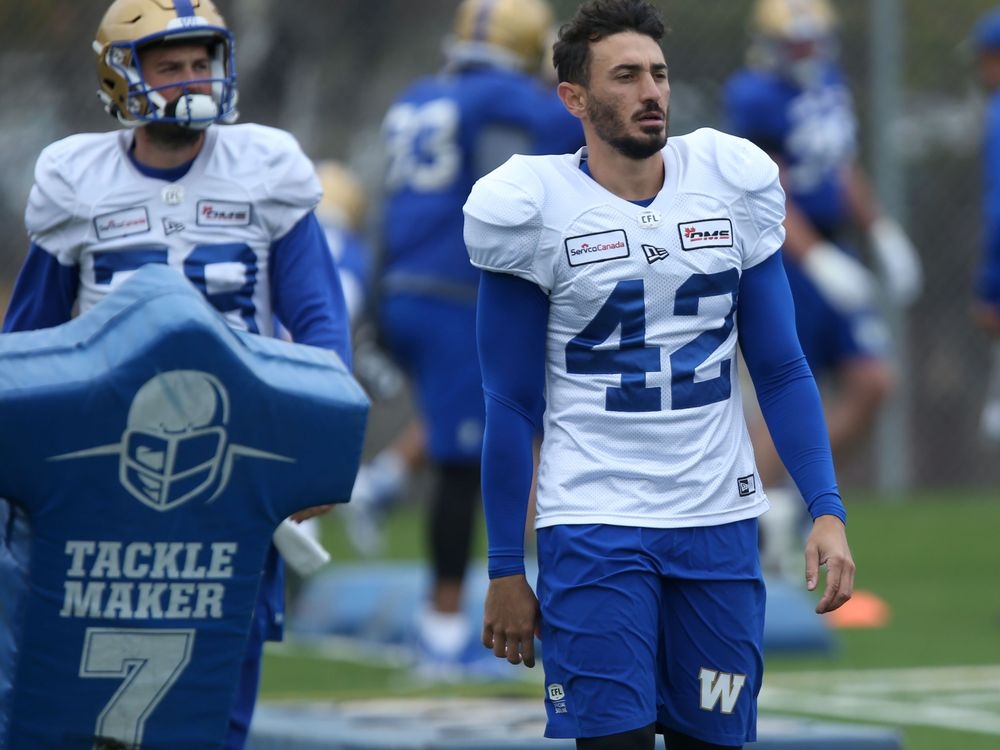 There were 80 km/h wind gusts shooting in from the south end of the Winnipeg Blue Bombers’ practice field on Friday, the kind of force that can blow around equipment and stagger even a 200-pound man.

Into that howling gale went footballs, off the right foot of kicker Ali Mourtada, most of them travelling majestically through the uprights.

Thirty-five yards, 40 yards, it didn’t seem to matter, as the diminutive American showed he can handle one of the biggest kicking challenges in Canadian football.

“Ali was unbelievable today,” Bombers head coach Mike O’Shea said after the final day of rookie camp at the University of Manitoba.

“As I said to him, it can be colder and it can be rainy, but in terms of the wind, that was as challenging a wind day as you’re gonna find. He made a very high percentage of his kicks and he looked good doing it. I thought that was an awesome day.”

Mourtada is one of the more intriguing players that will take part in training camp, which is scheduled to open on Sunday at the U of M and IG Field. It remains unclear if camp will start on time due to a labour dispute between the players and CFL owners.

Mourtada got his first taste of CFL action last season, kicking field goals in five games, but mostly gaining notice for his lack of success.

After going 8-for-15 on field goal attempts (53.3%), Mourtada was replaced by all-star Sergio Castillo for the last three games of the regular season and the playoffs.

Castillo went on to be a Grey Cup hero, going 5-for-5 on field goals in the Bombers’ overtime win over the Hamilton Tiger-Cats, but then signed with the Edmonton Elks the off-season, leaving the Bombers in a place where they have circled back to Mourtada, a 31-year-old who was born in Sierre Leone.

Mourtada handled a very trying first season like a pro, spent the off-season working hard on his craft and left a strong enough impression on the coaching staff to get a call-back.

“Ali is in a spot where everything looked just fantastic in terms of how he was going about his daily business,” O’Shea said. “His mindset was spot on, in my mind. When you take that all into account and look at the bigger picture, not just an outcome, it’s pretty easy to bring him back.”

One of the reasons why Mourtada struggled in 2021 was because of his unfamiliarity with the wider hash marks on the field in the CFL game. Many of his kicks were from a slightly different angle than he was used to and he was missing by booting straight balls.

All that has changed in 2022, as the CFL has moved the hash marks in toward the centre of the field and they will be nine yards apart instead of 17.

While it’s a move designed to increase offence by giving quarterbacks and receivers more room to work their magic, it should also be a big benefit to kickers, Mourtada in particular.

“It’s kind of what I’m used to,” Mourtada said. “Last year I had some obstacles with that. Now, my alignment is something that I’ve been used to for years.”

Mourtada is one of only three kickers on the training camp roster this year and it’s very clearly his job to lose. Marc Liegghio, who handled the punting duties last year after being yanked from the place-kicking job, will be Mourtada’s stiffest competition. Australian player Tom Hackett is competing for the punting job.

Despite how things went last year — Mourtada heard boos from Bombers fans during his struggles and then had to finish out the year on the practice roster — he speaks proudly of learning from the experience.

“Obviously you want to come in and be great all year,” he said. “I don’t know any one person that hasn’t gone through adversity, but I think we can grow from that. You can become stronger, you can become not only a better person, but a better athlete. We’re all going to go through some sort of obstacle.

“So I’m just thankful to be here and I think I really learned from that experience. It calluses you a little bit to come in and do the job. Although it wasn’t ideal, I think it was the best experience for me.”

More than anything, Mourtada’s confidence is buoyed by the support he’s been shown by O’Shea and the coaching staff. If it were based on numbers alone, there’s no way he’d be back in Winnipeg this season, but Mourtada proved that he deserved another chance.

“It means a lot,” he said. “I put a lot of work into this and I think it shows. Obviously it didn’t show on the field as much as I would have liked last year in some games, but I think the ability is there for me and I think they recognize that.”

As for kicking into a howling wind, something field goal kickers in Winnipeg have to get used to, Mourtada says “Bring it on.”

“I enjoy it,” he said. “Today, going into the wind, you’ve just got to take the trajectory and bring it down a little bit. If, at any point, it goes up, it’s gonna hit a wall and it might start coming back to you.