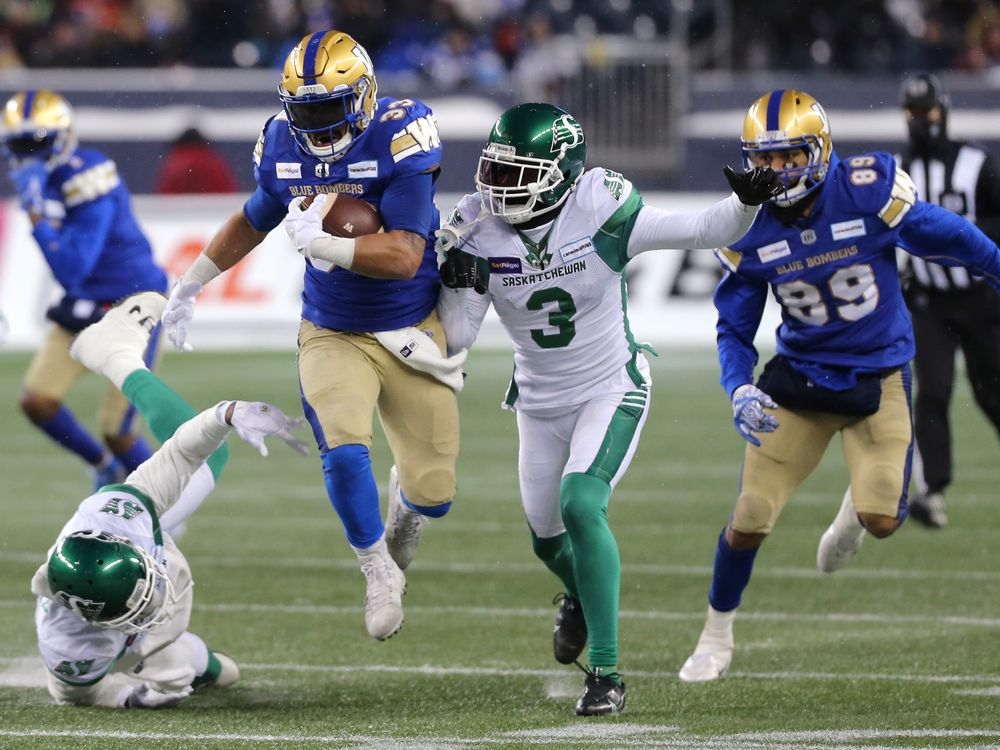 The Andrew Harris era is over in Winnipeg.

The star running back left his hometown Blue Bombers to sign with the Toronto Argonauts on the first day of CFL free agency, Tuesday.

So much for the storybook ending to a Hall-of-Fame career.

Harris, 34, was supposed to ride off into the Manitoba sunset, perhaps after one more season, his two Winnipeg Grey Cup rings glistening in the fading light.

But a funny thing happened on the way to his farewell tour.

The relationship between Harris and the Bombers somehow became strained, beginning last season and continuing into this off-season.

That strain was evident in the voice of Winnipeg GM Kyle Walters on Tuesday.

“It’s a sh— part of the business,” Walters said. “We’re talking about a Hall of Fame running back, the face of our franchise. I’ve never been in a situation like this.”

Walters was speaking before Harris signed with Toronto, but his tone and words suggested there was virtually no chance the Bombers would get No. 33 back in the fold.

“It’s impossible not to be saddened by it,” Walters said. “As much as you try to take a business approach, of course, we’ve been here together for this long. It’s a terrible situation, currently.”

Harris is easily the most instrumental player in Winnipeg’s turn-around from CFL cellar dwellar to two-time defending Grey Cup champion.

But a TSN report last week said Bomber brass wasn’t thrilled with his preparation for training camp last season, after the cancelled 2020 campaign.

“I’m not going to put any meat on those bones,” Walters said. “Our organization’s not in the business of giving private conversations out to anybody.”

A training camp injury, then another during the season, limited Harris to seven of 14 regular-season games.

With Harris’s contract about to expire this winter, more friction ensued, with the Bombers reportedly asking him to work out for them so they could monitor his conditioning before offering him another deal.

It’s not clear if that demand came from Walters, head coach Mike O’Shea or even president/CEO Wade Miller.

Walters says decisions are made as a group.

Complicating this one, at least for the GM: Harris acted as his own agent.

“Mike tends to build up the relationship with the players, I’ll take the business end of things with the agent,” Walters said. “But this is a bit of a murky one… there’s obviously more emotion involved.”

There will be fallout, too.

Harris was a loved and respected teammate in the locker-room and one of the most popular players in franchise history.

If there are concerns about the way he was treated, resentment could linger.

The immediate reaction on social media was more sadness than anger.

Receiver Nic Demski, like Harris a Winnipegger and product of Oak Park High School, tweeted a tear-filled emoji along with this: “Nothin but love and respect for the big bro.”

O-lineman Pat Neufeld said it was an honour to play with Harris.

“One of, if not, the best player I’ve ever played with and one of the best teammates I’ve ever had,” Neufeld tweeted. “Worst part of this business, gonna miss him!”

The Bombers will go with Brady Oliveira, yet another Oak Park grad, and Ontario’s Johnny Augustine as running backs.

But Harris’s absence will leave a hole.

When he did play last season, he still averaged 89 yards rushing per game.

In the West Final win over Saskatchewan, he looked like the three-time CFL rushing champion and five-time all-star of old, churning out 136 yards on 23 carries.

He added another 80 yards in the Grey Cup win over Hamilton.

“Respectfully, the best running back in the Canadian Football League,” Clemons said in a statement. “Homegrown through junior football, he is not defined by his birth certificate but refined by our Canadian game. His will to win is only paralleled by his love of the game. Andrew is a gift, a game-changer.”

The Bombers will miss that relentless will. Come playoff time, it’s invaluable.

Never was it more on display than in the 2019 Grey Cup, when Harris took his team on his back and didn’t stop until they’d ended a 28-year championship drought.

That marked a third straight season with No. 33 wearing the CFL rushing crown.

It should also have marked the crowning chapter of a story that would end in the city where it began.

The Bombers will have to live with that.