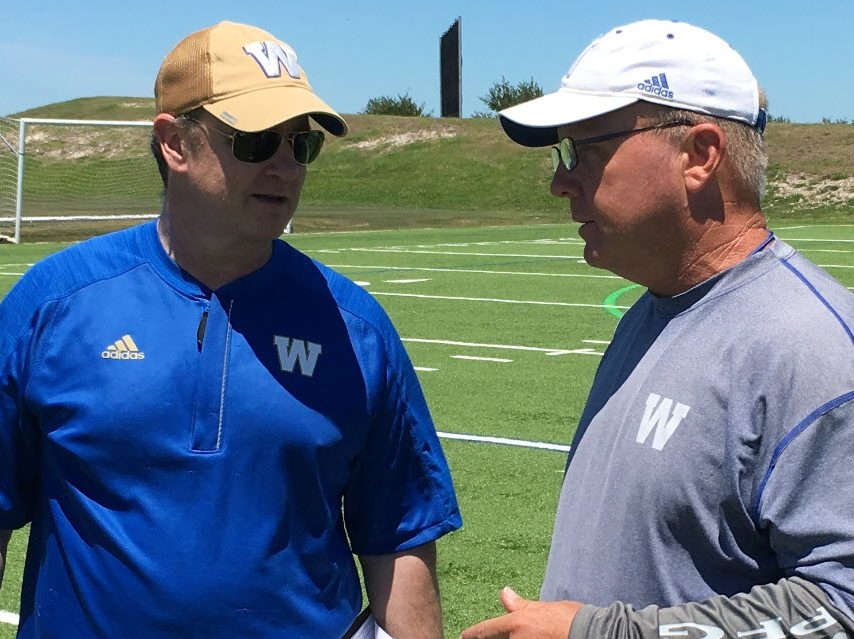 We’re still more than a month from CFL free agency, when dollars talk and players walk.

The hope here in Winnipeg is the prospect of taking another slurp from the Grey Cup will, for many players, trump the idea of squeezing every drop from their next contract.

“The good thing is I think the bulk of our players would want to continue to take a shot at winning again,” Blue Bombers assistant GM Ted Goveia said. “They like the environment. Hopefully, we get the bulk of them back.”

Of course, an off-season plan can’t be built on hope.

Some turnover is inevitable, as players leave for better opportunities somewhere else (NFL or CFL) or get squeezed out by salary-cap constraints.

That’s where Goveia and fellow assistant GM Danny McManus come in, constantly on the hunt for the next Brandon Alexander or Jackson Jeffcoat for the defence, the next Kenny Lawler or Rasheed Bailey on offence.

In recent one-on-one interviews with the Winnipeg Sun, Goveia and McManus, fresh off two-year contract extensions, shared their approach and how it’s changed over the years.

A potential player has to have the talent and character, of course.

But McManus says through eight years of looking for players that suit head coach Mike O’Shea’s culture, he’s learned to look for another quality that’s not always as easy to see.

“Now it’s the guy that really, really loves football,” McManus said. “It’s a credit to Mike, because that’s what he preaches each day to his guys in the locker-room and on the practice field. You’ve got to love what you’re doing. If you don’t truly love what you’re doing, then it becomes a job.”

When football’s a job, you tend to check in at start time and check out at closing time. That’s 4.5 hours a day in the CFL.

Players who live for the game eat up extra film study like it’s a steak dinner.

We constantly hear from the Bombers how much time they put in.

But how does a scout find that out about a player simply by watching games?

“You watch them on the field, how they react with their teammates,” McManus explained. “You watch them on the sidelines when the other side has the football. What are they doing? Are they by themselves? Are they talking with the coaches? It’s a whole interview process that most of the time the player you’re looking at doesn’t even know it’s going on.”

McManus talks to players, too. A lot. To his coaches and his teammates. Sometimes going back as far as high school.

“You’ve got to dig a little bit deeper,” he said. “And just find what makes him tick.”

What McManus doesn’t want to hear: the player talk only about what football can give him.

Proper scouting goes way beyond that.

“Highlight tapes are tough to judge, because all highlights are good,” McManus said. “And I tell the kid I need everything. I need to see your good, the bad, the ugly. Because that’s the way we get a true evaluation of you.”

McManus, based in Florida, focuses his scouting on American colleges and NFL camps, while Goveia scouts players on both sides of the border.

Together with O’Shea and GM Kyle Walters, they form a front-office foursome that’s found its groove, even if the first few years were as scratchy as that old 45 at the bottom of your father’s stack of vinyl.

“It’s working really well because we were able to get through the growing pains together,” Goveia said. “You’re trying to solve every problem the first couple of years, and you finally get to a place where you have some vision of where problems could exist, and you find solutions easier because you’re not trying to fix everything that ever went wrong. You’re more focused.”

It won’t be easy focusing on this year’s free-agent list, which is so long it’ll make your head spin.

The Bombers have just four starters under contract for next season.

That seems to be the new normal in the CFL.

“I remember my years, six or seven guys on a team would be free agents,” McManus, the former quarterback, said. “It has changed. But we just deal with it and roll with it. You’d like to see a guy stay around a lot longer, and I think the fans would, too.”

The Bombers managed to pull it off after their 2019 Grey Cup, selling each other on the ‘Let’s run it back’ theme.

Their celebration in Hamilton two weeks ago was just getting started when McManus and Goveia were already thinking about next year.

“We saw the guys popping the champagne,” McManus said. “Ted and I were sipping on beers there, and said, ‘OK, I guess we get to work tomorrow on 2022.’”