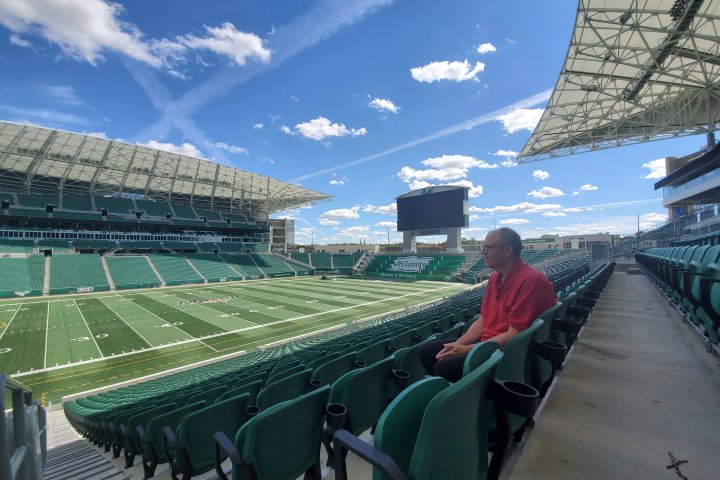 To relive Rob Vanstone‘s favourite Labour Day Classic memory, you have to travel all the way back to 1976.

“It was not going well for the Roughriders,” Vanstone said of the matchup against the B.C. Lions. “Ron Lancaster had thrown four interceptions. It was just an ugly game.”

Luckily for Vanstone, then a wide-eyed 12-year-old, the tables turned as the clock ticked down at Taylor Field.

As he recalls, defensive lineman Bill Baker “flattened” Lancaster with a crushing tackle late in the fourth quarter. Lancaster needed assistance to get off the field. But moments later, a Lions punt return was fumbled and the ball came back into white-and-green possession. Vanstone said the stadium went quiet. All eyes found Lancaster on the sidelines, who met that collective gaze, took off his warmup jacket and limped onto the field.

That game would become the first of many fond Labour Day Classic memories for Vanstone. In 1983, Vanstone watched punter Ken Clark step in for injured placekicker Dave Ridgway and put a game-winning field goal through the uprights late in the fourth. The matchup in 1990 came complete with a 107-yard touchdown pass courtesy of QB Kent Austin and slotback Jeff Fairholm. And, just last year, the Riders won the Classic on a last-second Brett Lauther field goal that triggered a “sprint, or whatever kickers are capable of, with Jon Ryan and Brett Lauther towards Pil Country.”

But this year, for the first time in 73 years, no new memories will be made.

“It’s gonna feel really weird on Sunday. I just can’t really process yet what that’s gonna be like,” Vanstone said.

Read more: Saskatchewan Roughrider Jordan Reaves is using his platform to speak out

According to Vanstone, the string of consecutive home Roughriders games on Labour Day weekend stretches back to 1948 (“Mackenzie King was the prime minister. It’s mind-boggling,” Vanstone added.)

The current rivalry with the Winnipeg Blue Bombers began in 1982.

But Vanstone says the real precursor to the Labour Day Classic took place in 1937 at what was then known as Park de Young. Before a crowd of an estimated 5,000, the Riders took on the Calgary Bronks (which would be succeeded by the Calgary Stampeders). Unfortunately for the home crowd, the Bronks took the game 4-1.

But even if those present didn’t yet know it, a tradition had been born.

“Whether the Roughriders are having a good season or a bad season, the Labour Day Classic is a happening,” Vanstone said. “Sometimes they’re duds, and sometimes they live up to the label, Regardless, it’s an event.”

And regardless of the outcome of the game, Vanstone says the pageantry of the occasion is incomparable.

“You really feel it. You really feel that buzz. It’s one of those games you always get to early, to soak it in and watch the fans dressed up. You just marvel at the spectacle that even the pregame becomes.”

Read more: CFL players are getting back to work after season cancelled

Naturally, the Labour Day Classic memories came bittersweet on a weekend, and an entire year, void of CFL football.

One fan told Global News the 2019 Labour Day Classic was his and his wife’s first-ever Riders game.

“We fell in love with the team and the atmosphere at the stadium. So yeah, it certainly pushed us to get season tickets,” he said. “We’ve been looking at this next one on the calendar. It’s also our anniversary so we were really looking forward to it.”

Another said the Labour Day classic always means “beer and pizza” and a memorable time with rarely seen friends.

A third told Global that while Labour Day weekend is always full of chores and a trip to the farm, the Labour Day Classic is never missed.

“Yes, it makes me very sad that they aren’t playing,” she said.

While memories may tell the most colourful stories, there’s also quantifiable evidence that the Labour Day Classic will be sorely missed this year.

“It’s the one game a year that you know will be sold out. Last year the Roughriders finished first. They only sold out one regular-season game and that was the Labour Day weekend game,” said Vanstone.

In its place, the Saskatchewan Roughriders organization is stepping up to try to fill some of the void.

And if that’s not enough to cheer up your green-and-white heart, Vanstone pointed out a bit more silver lining in the clouds.

“The interesting thing is the weather forecast looks terrible,” Vanstone said. “When the Bombers and Riders play, it’s always sunny but it’s not looking good this weekend. I guess it’s fitting.”