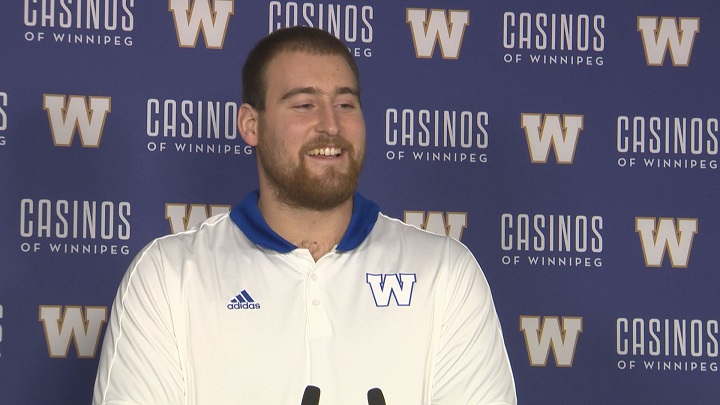 The Winnipeg Blue Bombers championship caliber offensive line is slowly coming back together.

The Bombers re-signed another member of the Grey Cup winning offensive line on Monday by inking Winnipeg product Geoff Gray to a two-year contract extension.

Gray avoids free agency to return for a fourth season in the blue and gold.

After being named the Canada West Outstanding Down Lineman of the Year in 2017 with the Manitoba Bisons, Gray was selected in the first round, eighth overall by the Bombers in the 2017 CFL Draft.

He had tryouts with the NFL’s Green Bay Packers, New York Jets, and Cleveland Browns before joining his hometown Bombers late in the 2018 season.

He made 12 starts at guard in the 2019 season, and was relegated to a backup role last season after the 2020 CFL campaign was cancelled. Gray appeared in only five games last season, but he could be thrust into a starting job in 2022 with starting guard Drew Desjarlais currently getting interest south of the border.

READ MORE: ‘It was kind of a whirlwind experience’: Winnipeg’s Geoff Gray back from NFL after signing with Blue Bombers

Desjarlais, Stanley Bryant, and Michael Couture will become free agents next month if they don’t sign a new contract.