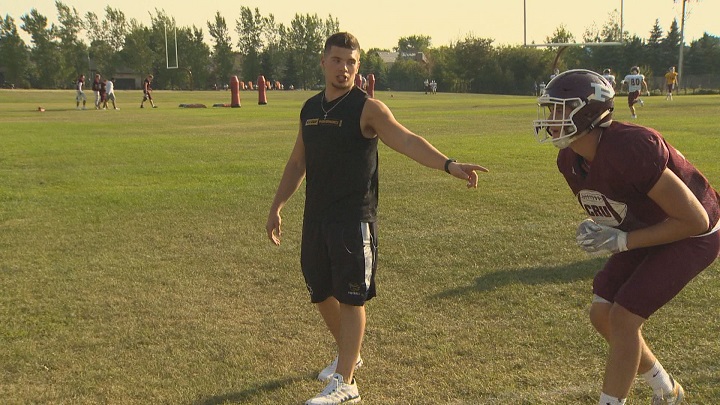 The Als placed the former Winnipeg Blue Bombers linebacker on the suspended list on Tuesday.

Lalama doesn’t know yet if he’ll sit out the whole campaign as he’s taking it day-by-day, but he’ll definitely skip the start of the shortened CFL season.

He first has some undisclosed business take care of in the Manitoba capital, and also has some concerns with the health restrictions put in place for the players.

“I have some personal and professional matters that need my attention here at this time,” Lalama said through a text message. “These make it extremely difficult for me to just get up and leave, knowing the uncertainty of everything this season, and the current restrictions that are in place for players.”

While Lalama didn’t get into specifics, he made it abundantly clear that he’s not retired.

“I am not retiring,” he said. “Simply not able to report at this time.”

The 27-year-old is in his second stint with the Alouettes after being released by the Bombers midway through the 2019 season.

The Bombers mainly used Lalama on special teams, where he recorded one special teams tackle in seven games with the blue and gold. He declined a spot on the Bombers’ practice roster to instead become a free agent, where he quickly latched on with the Als.

He was named one of the CFL’s Top Performers of the Week late in the 2019 season and in the final 11 games with Montreal, Lalama had 25 defensive tackles, eight special teams tackles and one sack.

He missed all of the 2018 season with a shoulder injury after he suited up for the Alouettes in 2017.

Lalama won the Presidents’ Trophy as the top stand-up defensive player in Canadian university football while a member of the Manitoba Bisons in 2016.