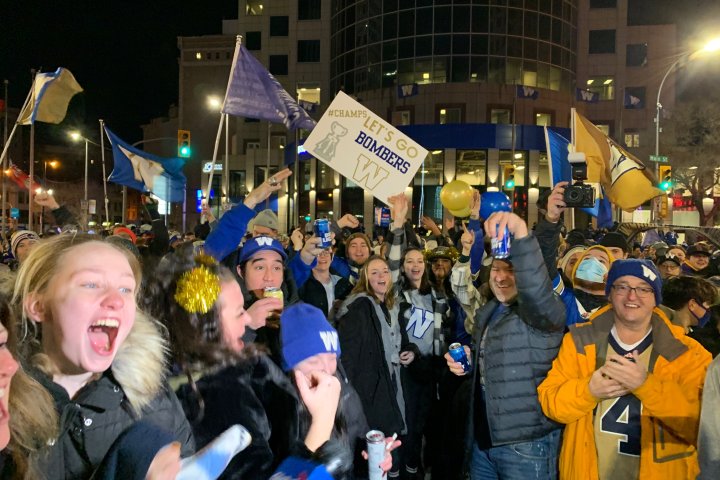 The Winnipeg Blue Bombers are back-to-back Grey Cup champions, and Winnipeggers celebrated the win at the city’s most famous intersection Sunday night.

Bomber fans started gathering at Portage and Main after the team beat the Hamilton Tiger-Cats in a spectacular overtime finish in Hamilton 33-25.

About 200 people flooded the intersection by 9:30 p.m. and the crowd continued to grow.

“This team is amazing,” said Winnipeg Mayor Brian Bowman, who talked to Global News in Hamilton.

“You gotta give credit to Hamilton … that was a really hard game to watch,” said Bowman, who admitted he had knots in his stomach most of the game.

Read more: Champions set to be removed from Grey Cup, replaced by Bombers or Ticats

The Blue and Gold beat the Tiger-Cats to pick up the title in 2019 as well.

Congratulations to our @Wpg_BlueBombers !! This was an amazing game and we are so proud of our team.
Let’s bring home that cup! #FortheW pic.twitter.com/rS7jCG19Te

Congrats to Wade Miller, Coach O’Shea and all players, coaches and staff—you’ve put together a remarkable franchise!#ForTheW#DefendTheCup#LetsDefendAgain https://t.co/dR6uiMtyqI

What a fantastic football game! Way to go @Wpg_BlueBombers…we’ve had a ton of fun watching you win this season! #ForTheW #GreyCupChampions pic.twitter.com/93Vj5MxmA5