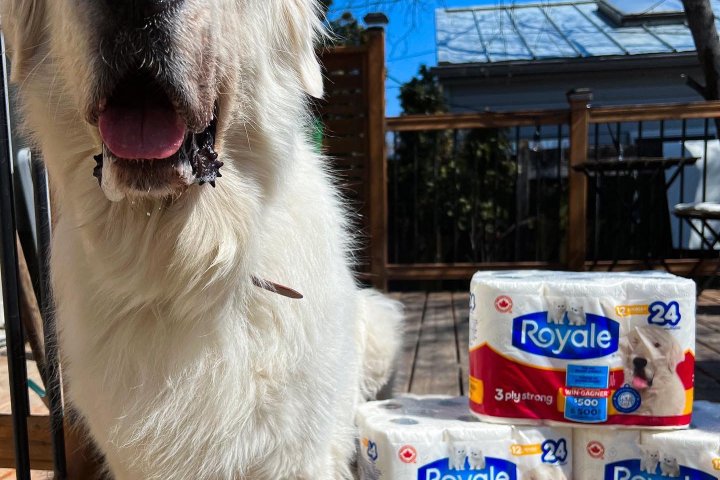 A former Winnipeg Blue Bomber’s dog — already well-known locally through appearances on his owner’s social media —  is on a roll nationally.

The pup, Bonhomme, owned by John Rush, can currently be found adorning packages of Royale toilet paper on grocery store shelves across Canada.

“It’s still so surreal,” Rush tells 680 CJOB’s The Start of seeing his dog’s face staring back at him in the toilet paper aisle.

“It’s like the funniest thing that’s ever happened to me.”

He says he later got a call from Royale with an offer he couldn’t refuse.

“They reached out and they’re like, ‘hey, how would you feel about having Bonhomme on the cover’ and I like lost my mind, obviously,” said Rush.

After obviously saying yes to the offer, Rush says the company pulled out all the stops to get a perfect cover shot of Bonhomme.

Cats out of the bag! Bonhomme is on the packaging of Royale toilet paper nationwide to help raise funds for dog shelters 😍 I’m so proud of him!! pic.twitter.com/RhAf1c7Noe

“They flew in a photographer and rented out a studio and I had to bring my dog to this professional photographer.

Rush and Bonhomme — French for “Good Boy” — are among several Canadian pets and their owners taking part in Royale’s Home for Every Pet Project, which raises money and awareness for shelter animals in need of adoption across the country.

“Because their mascots were animals, they wanted to raise funds for animal shelters across Canada,” Rush says.

“Every package sold, a portion goes to animal shelters, as well as they’re doing a lot of donation matching campaigns on their website, too.

“It’s a really amazing campaign and I’m very fortunate to be a part of it.”

The honour of becoming a spokespup for Royale comes at the tail end of a hard year for Bonhomme and Rush.

The 150-pound behemoth of a dog lost an eye last year to cancer, but Rush says he’s been feeling better since the surgery.

“He’s been a pretty big champ about the whole thing,” he said.

Rush says his social media has been inundated with pictures of people with Bonhomme’s toilet paper, but no one is prouder than the former Bluebomber’s mom.

The special edition packaging may be available across Canada, but it’s probably a little harder to find in Rush’s hometown of Niagara Falls, Ont.

He says his mom bought it all.

“I think she literally sold out Niagara Falls of the Bonhomme toilet papers,” he laughs.

“And what she’s been doing now is she’s driving it around and like giving it to people.