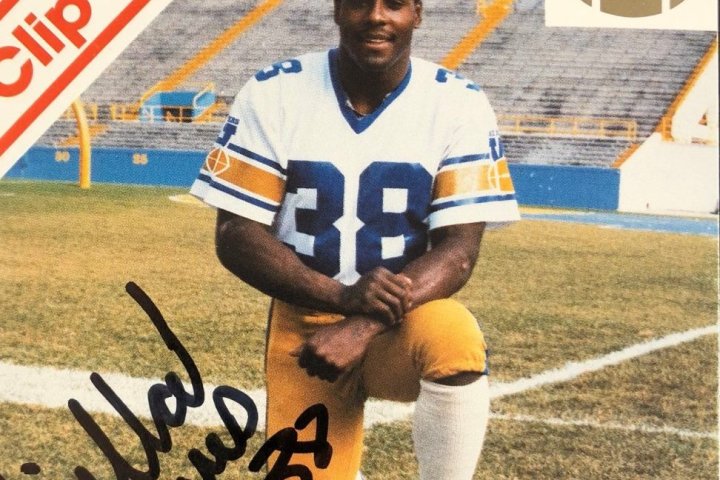 A local sports hero is throwing his helmet into the ring as a candidate in an upcoming Winnipeg byelection.

Willard Reaves — who helped the Winnipeg Blue Bombers win the Grey Cup in 1984 and spent parts of five seasons with the club — has been tapped by the Manitoba Liberals to run as a candidate for provincial office in the Fort Whyte byelection.

The byelection, expected to be called sometime after Manitoba’s new premier is decided by the Progressive Conservative party Saturday, is to replace Brian Pallister, who stepped down from his role as Fort Whyte MLA Oct. 4, shortly after resigning as premier.

The party said Reaves will be formally nominated as a candidate on Nov. 5.

Manitoba Liberals are proud to announce that on November 5, 2021, we will be nominating former Winnipeg Blue Bomber Willard Reaves as the Manitoba Liberal candidate to run in the Fort-Whyte By-Election. News Release: https://t.co/tWuY4xSvoT #mbpoli pic.twitter.com/jaUgtBe2Eb

According to provincial election laws, the byelection must be called within six months of Pallister’s resignation.

“I am excited to be putting my name forward for this important by-election to give voice to all people that feel like they haven’t been heard for decades,” Reaves said in a statement Thursday.

“I’ve decided it’s time to step off the sidelines and get in the game, because we need people in government prepared to deliver action – not talk. This is an opportunity to deliver change to the Manitoba Legislature.”

The Arizona-born Reaves has lived in Manitoba for nearly four decades, returning to Winnipeg after a short stint in the NFL with Miami and Washington.

His sons, Winnipeg-born Ryan and Jordan Reaves, are also professional athletes — Ryan for the New York Rangers of the NHL and Jordan for the Bombers’ rival Saskatchewan Roughriders.