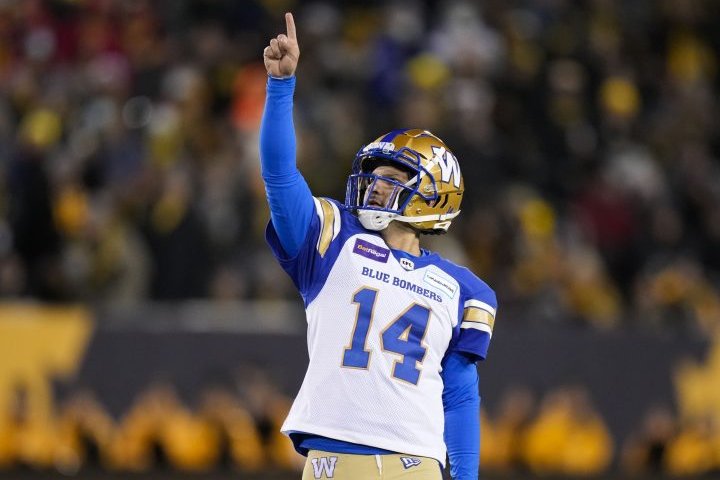 After hitting Adams to cap the opening possession of the extra session, Collaros, the CFL’s outstanding player, found Rasheed Bailey for the two-point convert.

Winnipeg trailed 19-10 heading into the fourth but had a brisk wind _ which gusted to nearly 50 kilometres throughout the night. After Castillo’s 20-yard field goal, Collaros threw a 29-yard TD strike to Nic Demski before Castillo’s 95-yard kickoff single pulled the Bombers to within 22-21 with 5:33 remaining.

Castillo made it a three-point game with a 76-yard kickoff after his fifth field goal of the night. He also had two singles.

Masoli came into the contest in the second quarter with Hamilton trailing 7-0. He replaced starter Dane Evans, who suffered an apparent neck injury after falling under two Bombers on a one-yard run.

Last week in the East final, Evans replaced Masoli and ran for two TDs while finishing 16-of-16 passing in Hamilton’s 27-19 road win over Toronto.

The temperature at kickoff was a 5 C but a 24-kilometre southwest wind made it feel like 2 C to start.

And it was evident early the wind would be a factor. Castillo opened the game with a 72-yard, wind-aided kickoff before Hamilton punter Joel Whitford’s first boot went 34 yards into the wind.

But the conditions didn’t bother the record Tim Hortons Field gathering of 26,324, the overwhelming majority clad in black and gold to support a Ticats squad playing its first home Grey Cup game since 1972.

“It wasn’t pretty. But that’s the kind of football we play,” said Winnipeg defensive lineman Willie Jefferson. “We play dirty, grimy, ugly football and nine times out of 10 we come out on top.”

“What a great game for the fans,” O’Shea told Winnipeg’s 680CJOB immediately after the game. “It was awesome.”

“We knew if we could just score some points and chip away … it’s a matter of getting the game going and then pin them.”

“He’s such a competitor. He knows he’s got it … none of that stuff fazes him,” he said about Collaros, who struggled in the middle of the game with two interceptions.

“He was great, you know, he took some shots tonight too … and he’s a fighter,” said Harris.

Steven Dunbar and Brandon Banks scored touchdowns for Hamilton. Domagala had three field goals and two converts. The other points came on a safety.

Castillo made it 10-10 with a 15-yard field goal with the wind at 6:26 of the third. And after Winston Rose stopped Masoli on a third-down gamble, Cameron Kelly’s 43-yard interception return gave Hamilton possession at Winnipeg 27-yard line.

Masoli’s 12-yard TD strike to Dunbar with 15 seconds remaining in the second staked Hamilton to its 10-7 halftime lead. Masoli entered the game with 7:10 remaining in the quarter when Evans was injured after falling under two Bombers on a one-yard run.

Masoli helped engineer a 12-play, 73-yard march that Domagala capped with a 13-yard field goal at 12:34. Then following a Legghio 31-yard punt, Masoli hit Don Jackson on a 36-yard completion before finding Dunbar as Hamilton did the most with the wind to take the halftime advantage.

“Jeremiah had an unbelievable game and an unbelievable last series there,” said Collaros. “I thought we had him with the wind and everything but he put together a really nice drive and they made a field goal. No doubt on that final drive for us. And then our defence is our defence.”

Winnipeg took a 4-0 lead in the first with the wind. Castillo’s 38-yard field goal at 6:44 came following Alden Darby’s interception. It came a play after Hamilton had recovered Janarion Grant’s punt-return fumble.

Then Legghio had a 70-yard single at 12:29 in the lowest-scoring opening quarter since the ’08 Grey Cup. Hamilton also managed just seven net offensive yards.