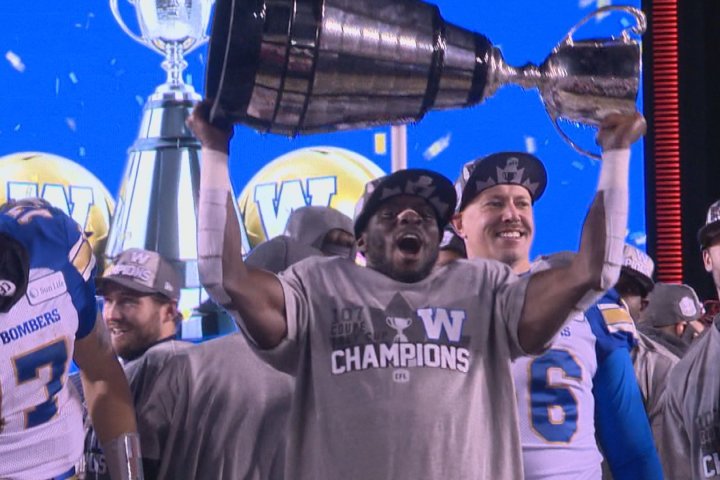 With no CFL football being played, many players were left to find day jobs to earn a paycheque.

And at least one player on the Winnipeg Blue Bombers used the nearly 20 months off to prepare for his life after football.

Running back Johnny Augustine didn’t just sit and sulk the past year and a half. Augustine headed back to the classroom, and on the eve of training camp, he returns to Winnipeg as an officially licensed real estate agent.

“As cushy as it sounds I’ve always been fascinated with homes,” said Augustine. “Real estate is very fast-paced. There is a lot of work involved, but that’s all I know coming from a football background, right?

“The things that we learn on the field and in practice, in the meeting rooms, the hard work and all that stuff relates to real life work.”

With no games to be played, the 28-year-old managed to finish the two-year program in less than a year, and becomes the second licensed realtor on the team along with defensive tackle Jake Thomas.

“One of the reasons why I’m doing real estate is because there’s been a few guys that I’ve seen who played football or is currently playing, and have gone that route,” he said.

“And I remember the last time I talked to Jake, at the time he got his real estate licence, and I know he mentioned how he was loving the career. So someone like, especially my teammate, seeing him be in that field kinda motivated me.”

While backing up Andrew Harris, Augustine had over 330 all-purpose yards and a touchdown in 2019, and between the football and tackling real estate, the third year Bomber has his hands full.

“I’ve always been DNA’d with just working,” Augustine said. “I do admit I wish I got more sleep, but that’s the only thing I say I’m lacking these days.

“I make sure that I get my training in in the morning. I typically do my readings. I do my research and stuff like that. Then I do my mobility work, my stretching and all that. Then I’ll go and run. And then do my plyo (plyometrics). Then after that I’ll hit the weight room. I’ll come home and relax for a little bit. Give my mind a little bit of a break, and then I’ll do more of my real estate stuff.”

I am beyond grateful and excited to announce that I am officially a licensed real estate agent. I have joined Ipro realty and partnered with the amazing Sirluckhomes Team.

Striving to be best in all my dreams & cannot wait to connect. Link in my bio for your real estate needs pic.twitter.com/Cnp0htgaYU

While his focus will mostly be on football, he’ll still be making the time for his new second career when the season begins.

And as much as he loves his new gig, retirement still never crossed his mind.

“I’m not going anywhere soon, and I can’t wait to defend our Grey Cup.”