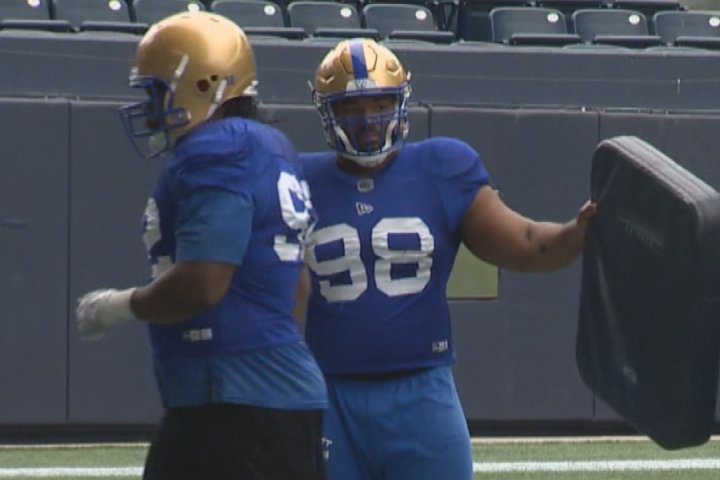 With free agency less than four days away, the Winnipeg Blue Bombers have only 11 players left unsigned after getting another contract extension completed on Friday.

Richardson, 24, had an impressive rookie campaign in 2019. He appeared in all 18 regular season games, as well as their three playoff contests. He started in 14 of those games.

Richardson considered testing free agency with the negotiating window to speak to other teams already open, but with Drake Nevis’ departure, he’ll likely take on a greater role with the Bombers next season.

“It was, like, my first free agency,” Richardson said on a conference call on Friday. “It was less about wanting to go somewhere else. It was just kinda seeing what’s out there. I’ve never been through that process, and I thought it’d be kinda interesting.

“It was actually pretty stressful. I’m not going to lie.”

The club has agreed to terms with Steven Richardson on a one-year contract extension.

Richardson won the starting job out of training camp as a rookie after spending the previous season on the practice roster of the NFL’s Los Angeles Chargers. He was displaced as the Bombers’ starter late in the season when the team made a ratio change, and started Canadian Jake Thomas in that position. But he still played on a rotation, and finished his first CFL season with two sacks, 25 defensive tackles and three tackles for losses.

With Richardson, Thomas, Willie Jefferson, and Jackson Jeffcoat all returning for 2021, the Bombers will have a ferocious front-four again next season.

“With all of us coming back, I mean, it’s only going to build more chemistry,” Richardson said. “It’ll make us even tougher to beat.”

The Winnipeg Football Club also signed a former NFL’er on Friday. The Bombers came to terms with cornerback Deatrick Nichols.

The 26-year-old was most recently with the Miami Dolphins. He appeared in two games for the Arizona Cardinals in 2018, and also spent time with the New Orleans Saints.

Nichols also led the XFL with three interceptions while a member of the Houston Roughnecks in 2020.