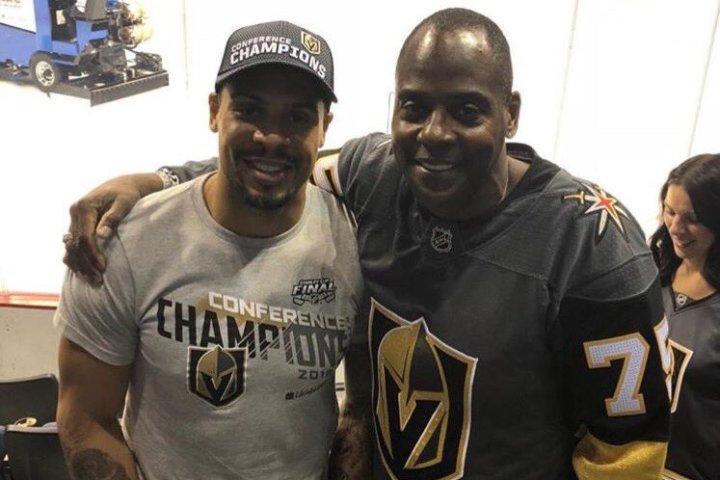 A former Winnipeg Blue Bomber is weighing in on the current crisis in pro sports surrounding issues of racial justice — and it’s something both he and his hockey-playing son can relate to first-hand.

Willard Reaves, who spent five seasons as a running back with the Bombers — including as a member of the 72nd Grey Cup-winning squad — is the father of Ryan Reaves, a winger for the NHL’s Vegas Golden Knights.

The younger Reaves — one of a small but growing number of Black NHLers — made headlines earlier this month for participating in an on-ice protest.

“Ryan is very outgoing. He plays the game with a lot of heart and he plays it to the best of his ability,” his father told 680 CJOB.

“Ryan wasn’t the greatest skater when he was growing up, but he worked hard at it, he got to the spot where he is right now, and he’s well-respected in the league… and for his opinions.

“When he took a knee the other night, a couple weeks ago, I was very proud of him. We never talked about it. He made the decision, and those decisions, you have to live with, just like what’s going on in our society today.”

Ryan Reaves himself told media after kneeling that his action wasn’t meant to disrespect the U.S. flag or its veterans — a common criticism of athlete protests.

“Not everybody is truly free in this country, and I think it’s starting to come to light a lot more now,” he said in a post-game press conference.

“Especially with social media, it’s kind of blown up over the last year, so that’s kind of where I’m coming from.”

Read more: Hextall on Hockey: Tired of talking about sexism in hockey

Willard Reaves, an Arizona native, said the ongoing situation in the United States is a long time coming.

“I’m not surprised about it,” he said. “A lot of people just don’t get it.

“It’s almost like, ‘We’ll protest for a couple of weeks and whatever, then let’s get back to normal.’ Unfortunately, this is society’s norm in some areas of the United States, and it’s very disappointing.”

The most recent sports protests have involved NBA teams boycotting playoff games to protest the shooting of Jacob Blake, a Black Wisconsin man, by police.

Reaves said he’s not surprised some sports teams and leagues have been slow to respond to the growing Black Lives Matter protest movement.

Read more: Hextall on Hockey: players can lead the way on fighting racism

“There’s no African-American that owns a basketball team or football or something like this. It’s just the way society has been for so long. You get the perfect athletes that are Black, that bring in money… your bank account looks good. Who cares what’s going on in outside society?

“I think right now with the protests that are going on with the NBA and some forms in terms of hockey as well and football, it’s time. It’s long, long overdue.”

While Reaves said he’s glad to see star athletes using their platforms to open up the conversation about systemic racism, he doesn’t anticipate any kind of permanent change happening unless it comes from the top.

Lawmakers, he said, need to put things into place to make people in authority who commit acts of racism more accountable for their actions — and for the U.S., that starts at the White House.

“Unfortunately for Donald Trump, he just doesn’t understand it. He doesn’t get it. He’s in way over his head and he shouldn’t even be in office.

“Unfortunately, I voted for him. I will not make that mistake twice. He creates a lot of these problems. Donald Trump is perhaps the worst thing that could’ve happened to the United States in its history.

“Unless things are changed from the top, and I hope things change in November, we’re going to continue to do this.”