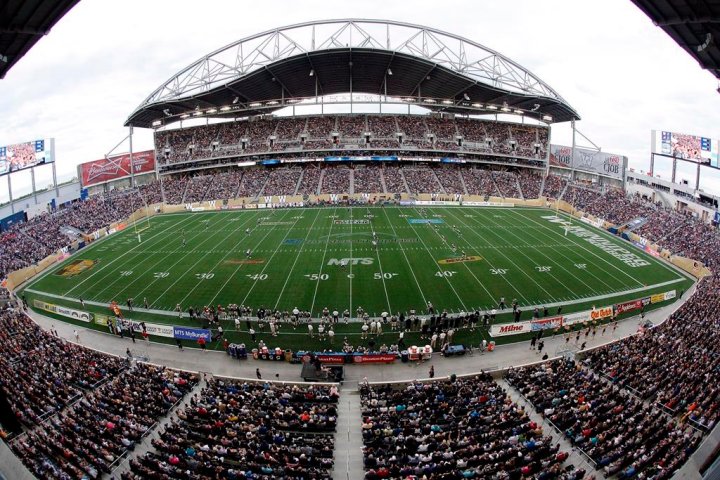 The president of the Winnipeg Football Club says he hopes to see sell-out crowds at home games as the team heads back onto the field this summer.

That’s as long as fans roll up their sleeves for a second-dose of COVID-19 vaccine, says Wade Miller.

“Being fully immunized, I think, is actually going to benefit our fans and make people feel safe here that everyone around them has that full immunization,” Miller told CJOB Wednesday, after provincial health officials announced a loosening of public health orders set to start Saturday.

Under the updated COVID-19 restrictions Manitobans will be able to return to restaurants and bars, enjoy a beer on a patio, go to church, and meet with larger groups of friends and family, among other changes to the rules.

Miller said the Bombers are also planning to allow fans who are at least two weeks out from their second shot of vaccine into IG Field for home games.

He said that means fans should be looking to have their second dose by July 20 to make sure they’re able to watch the Bombers take on the Hamilton Tiger-Cats in Winnipeg on Aug. 5.

As for how the club will make sure everyone who gets in the stadium is fully immunized, Miller said the club is working on those details now.

He said fans will likely be asked to show staff at the gates confirmation of their immunization through a provincial app before presenting their tickets.

“People are going to get very good at flipping their phones from one app to the next,” Miller said.

“We’re already starting the planning for that and probably will have staggered scans so you can do your app and switch it over to tickets five or six people later.”

He said the club is looking at adding 60-80 additional ticket ushers to keep the process running as smoothly as possible.

“These are the challenges we need to work through, and I look at it as an opportunity to have a full stadium.”

As of kids under 12, who are currently not eligible for the vaccine, Miller said they’ll be allowed into the stadium as long as they’re with a fully-vaccinated parent.

He said the team is still working with public health to figure out if those who aren’t able to get vaccinated for medical reasons will be allowed into games.

“Everyone understands that this is a little different and everyone is going to love to get back to IG Field,” he said.

“It’s definitely moving in the right direction and that’s because we’re all getting out and getting vaccinated so we need to keep that up.”

The CFL announced it will be going ahead with its 2021 season last week.

It will mark the league’s first action since November 2019 after it didn’t play last year due to the  COVID-19 pandemic.

The CFL unveiled plans in November for a full 18-game season to begin in June but later pushed that back to Aug. 5 and reduced the number of games to 14.

— With files from The Canadian Press