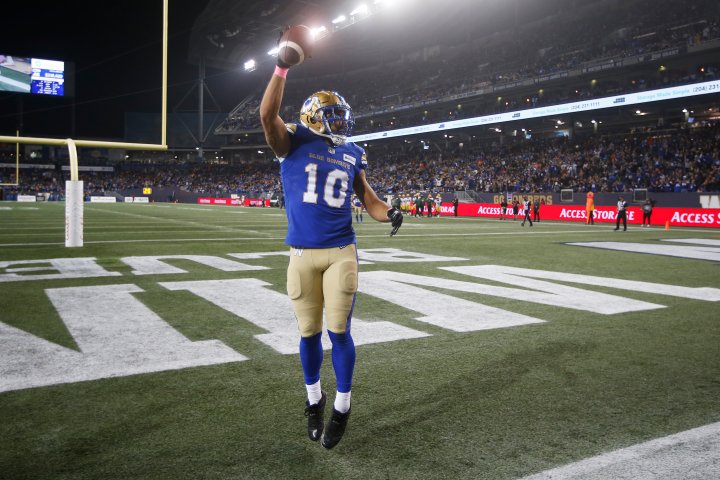 The Winnipeg Blue Bombers can ensure Saturday that the path to the ’21 Grey Cup in the West Division will go through IG Field.

Winnipeg (9-1) can clinch top spot in the West Division with a home victory over the B.C. Lions (4-5). With an eighth straight win, the Bombers would be the host team for the West final Dec. 5.

And that would certainly favour the Bombers. The defending Grey Cup champions are not only 7-0 this season within the West Division but remain unbeaten in five home games.

Winnipeg has also won seven straight at IG Field dating back to 2019 and 16 of its last 17 games there.

However, if B.C. wins and Saskatchewan (5-4) loses to Calgary (5-5), Winnipeg would still clinch top spot. The same would also apply if the Lions defeated the Bombers by less than 21 points and the Roughriders beat the Stampeders.

While the Bombers are on a nice roll, B.C. (4-5) comes in having lost three straight. That includes a one-sided 39-10 home decision last week to the surging Calgary Stampeders.

And the last time Winnipeg and B.C. met, the Bombers captured a 30-9 win at B.C. Place on Oct. 1. Zach Collaros threw for a season-high 417 yards with two TDs while receiver Kenny Lawler had 12 catches for 205 yards and a touchdown.

Winnipeg’s top-ranked defence did its part, too, registering six sacks and holding B.C. to just 16 yards rushing. Lions quarterbacks Michael Reilly and rookie Nathan Rourke were a combined 22-of-35 passing for 232 yards with an interception.

And Reilly was B.C’s rushing leader with nine yards. However, the veteran quarterback is 9-7 all-time versus Winnipeg and has thrown for over 300 yards seven times against the Blue Bombers.

The Bombers are looking to win eight straight for the first time since 2002-03 and reach the 10-win plateau for a fifth consecutive year, their longest such streak since 1962.

And a testament to Winnipeg’s depth is last week Brady Oliveira ran for 105 yards after incumbent Andrew Harris (knee) was injured in the club’s 30-3 victory over Edmonton. Oliveira also had 126 yards rushing in the Bombers’ season-opening 19-6 home win over Hamilton on Aug. 5.