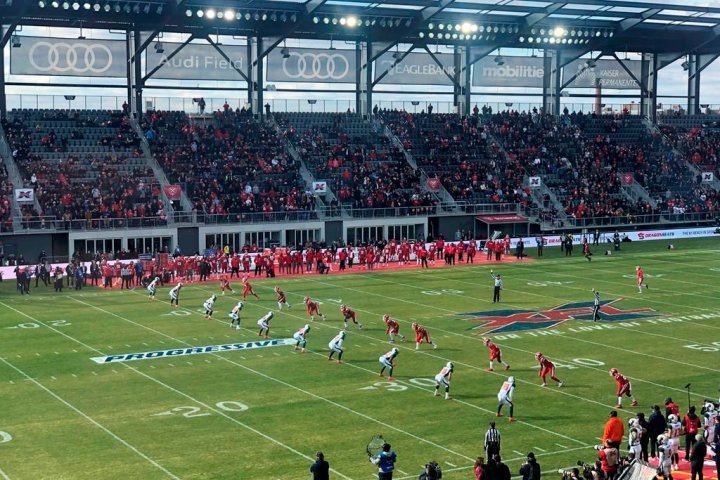 Discussions between the CFL and XFL about a potential partnership are underway, and the president of the Winnipeg Blue Bombers says it could be very good news overall for the Canadian league.

The two sides say they are looking to identify opportunities for the leagues to collaborate, innovate and grow the game of football.

“We can grow the game of football in Canada as well as in North America and around the world — which we started to do with adding international players,” Bombers president Wade Miller told 680 CJOB.

“We really just wanted our fans to know that we’re having these discussions and that they’re in their initial stages.”

BREAKING: The #CFL will explore opportunities for alignment with @XFL2022 ownershiphttps://t.co/8Ni8HabpXp

“This is for the future — our focus this year is about playing in 2021 in the CFL and getting the Blue Bombers back on the field and our fans back in the stands.”

The U.S.-based XFL was purchased last year by actor and former pro-wrestler Dwayne (The Rock) Johnson, along with a few business partners, and is expected to resume play next spring.

The six-team league was rebooted in 2018 after the failure of an earlier incarnation started by pro-wrestling magnate Vince McMahon of the WWE.

The original XFL existed for a single season in 2001 and was criticized for relying heavily on ‘sports entertainment’ gimmicks similar to those seen in the wrestling ring.

Miller said the current ownership group of the XFL — including Johnson who spent time on the Calgary Stampeders’ practice squad before shifting to wrestling — is made up of people with a great deal of success in business and sports, so there’s no downside for the CFL to hear what they have to say.

“Nothing’s been discussed in terms of how we move forward, but it’s just two organizations that have the passion for football, and how do we grow football? How do we build on the proud heritage of the CFL and move forward?

“We’ll see how these discussions go.”

“We love our game and we want to strengthen it. We’d have to be crazy as a league not to have conversations with groups like this that can strengthen our league.”

An update from ownership. #XFL

“We look forward to exploring how we might work with one of the most innovative sports brands in the world to grow the game, engage fans in new ways, and reach new audiences,” said Ambrosie.

“We look forward to seeing what possibilities our discussions might uncover, and to sharing those with our fans as the process unfolds.”

After being forced to cancel the 2020 season due to the COVID-19 pandemic, the CFL is expecting to return to the field this year.

–With files from The Canadian Press