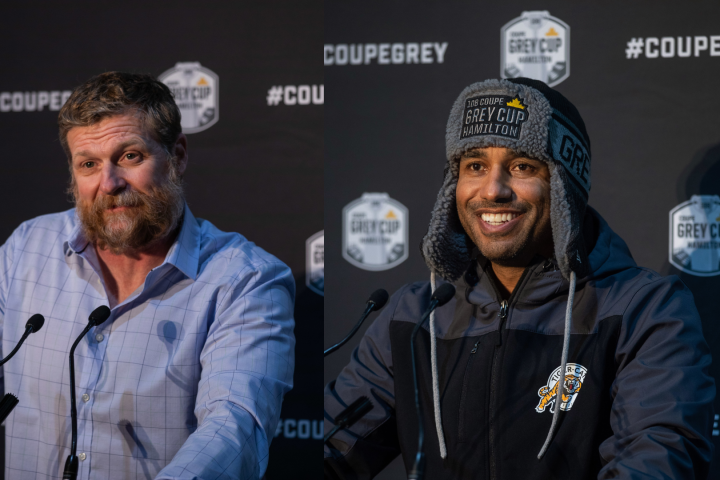 Head coaches Orlondo Steinauer of the Hamilton Tiger-Cats and Mike O’Shea of the Winnipeg Blue Bombers will again be on opposite sidelines at the Grey Cup game.

Hamilton will have home-field advantage Sunday when it faces Winnipeg at a sold-out Tim Hortons Field. The Blue Bombers come in as defending champion after downing the Ticats 33-12 in the 2019 Grey Cup.

This time around, the roles are certainly reversed.

In 2019, Steinauer guided Hamilton to a CFL-best 15-3 record, tying the league mark for most wins by a first-year head coach. Steinauer also got the better of O’Shea that year as the Ticats swept the two-game series with Winnipeg, which posted an 11-7 record before advancing to its first Grey Cup appearance under O’Shea.

This season, Winnipeg (CFL-best 11-3 record) was certainly the class of the league with two of its three losses coming after it had clinched first in the West Division. Hamilton (8-6) finished second in the East Division behind the Toronto Argonauts (9-5).

Steinauer and O’Shea definitely have a long history together.

They were teammates in Toronto (2001-08), O’Shea a hard-nosed middle linebacker and Steinauer a versatile performer in the secondary. They often spent time together evaluating game film as part of their preparations.

O’Shea and Steinauer won a Grey Cup as players with Toronto in ’04 before adding another as Argos assistant coaches in 2012.

O’Shea, 51, from North Bay, Ont., is in his seventh season as Winnipeg’s head coach. He’s a finalist for the CFL’s coach of the year honour for the first time.

Ryan Dinwiddie, who completed his rookie year as Toronto’s head coach, is the East nominee.

Steinauer, a 48-year-old native of Seattle, is in his second season as Hamilton’s head coach. He was the CFL’s top coach in 2019.

Hamilton and Winnipeg met just once this season. The Bombers began their title defence with a 19-6 home win over the Ticats to kick off the CFL’s resumption of play.

The league didn’t hold a 2020 season due to the COVID-19 pandemic. So, the two teams that began the ’21 campaign will now close it out.

Hamilton comes into the Grey Cup having won six of its last seven games. And the Ticats’ defence has been solid in the playoffs, anchoring wins over Montreal (23-12) and Toronto (27-19) in the East semifinal and final, respectively.

Hamilton registered six sacks and five turnovers versus the Alouettes while holding CFL rushing leader William Stanback to 29 yards on 12 carries. On Sunday, the Ticats didn’t allow a touchdown as Toronto’s scoring consisted of six field goals and a single.

Twice in the first quarter, Toronto drove inside the Hamilton five-yard line and each time had to settle for a field goal. Ticats quarterback Dane Evans also stripped Argos’ defender Shaq Richardson of the ball at the visitors’ 25-yard line that prevented the Double Blue from adding to a 12-0 advantage.

Evans was also instrumental in Hamilton’s win over Toronto. He relieved starter Jeremiah Masoli in the second quarter and finished 16-of-16 passing for 249 yards and a TD.

Evans also ran for two fourth-quarter touchdowns as the Ticats became the first team to secure a home Grey Cup berth since the ’13 Saskatchewan Roughriders.

Steinauer hasn’t said who’ll start Sunday against Winnipeg. Masoli was under centre for the season-opening loss to the Bombers.

The legendary Mosca, who was inducted into the Canadian Football Hall of Fame in 1987, died Nov. 6 at age 84 following a lengthy battle with Alzheimer’s.

Two years ago, Winnipeg native Andrew Harris put an exclamation mark on the Bombers’ championship season. He was named Grey Cup MVP and top Canadian after rushing for 134 yards and a TD on 18 carries while adding five catches for 35 yards and a touchdown against Hamilton.

On Sunday, Harris ran for 136 yards and a TD as Winnipeg dispatched the Saskatchewan Roughriders 21-17 in the West Division final despite committing six turnovers. The game was Harris’s first since Oct. 15 due to a knee injury.