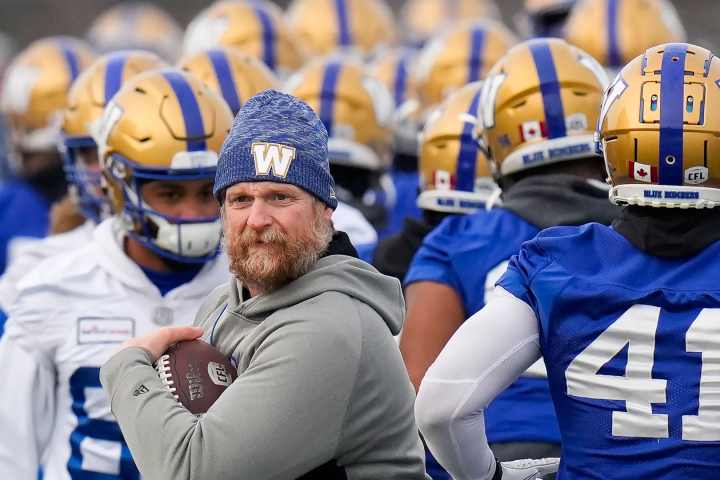 He’s been gone since 2000 but it seems some Hamilton football fans still haven’t forgiven Mike O’Shea for leaving the Tiger-Cats.

He added another Grey Cup win as an assistant coach with the Argos (2012) before guiding the Winnipeg Blue Bombers past Hamilton 33-12 in the 2019 contest. That was O’Shea’s first title as a CFL head coach.

Winnipeg is returning to the Grey Cup game Sunday, squaring off against the hometown Ticats at Tim Hortons Field.

When O’Shea returned to Hamilton as an Argos player, it wasn’t surprising that some fans threw batteries at him on Toronto’s sideline at Ivor Wynne Stadium. And while many Ticats supporters have either mellowed or moved on, O’Shea said he still hears it from some fans behind the visitors’ bench at Tim Hortons Field.

“There’s a couple of guys behind our bench who are full of vigour,” O’Shea said Wednesday during the Grey Cup coaches news conference. “I think it has calmed down quite a bit but there are a few fans that still feel jilted.”

Hamilton head coach Orlondo Steinauer knows this firsthand. He played four seasons with the Ticats (1997-2000), helping the franchise win the Grey Cup in 1999 (its last), before finishing up with Toronto (2001-08).

1:43 Fight breaks out between Toronto Argos players and fans

“I did stand beside (O’Shea) and he’s not over-exaggerating the battery story,” Steinauer said. “But you did have dugouts you could tuck into back then.

“I love it, that’s the CFL, that’s what is beautiful. They love their teams. I share the same thing, when I was in Hamilton they loved me. When I came back, not so much. That’s just what it is.”

Blue Bombers looking for back to back wins

The Winnipeg Blue Bombers are looking to become the CFL’s first repeat champion since 2010.

The Montreal Alouettes were the last club to win consecutive Grey Cups (2009-10). Winnipeg can do so Sunday with a victory over Hamilton.

And it’s been a while since the Grey Cup was last played after a gap of two years or more. The last time that happened was 1920 as there were no games between 1916-19.

The Tiger-Cats will attempt to become the first team to win a CFL championship at home since the Saskatchewan Roughriders in 2013.

That year, the Riders defeated Hamilton 45-23.

Even though the Tiger-Cats play out of Tim Hortons Field, Hamilton is designated as the home team for the Grey Cup as the East Division champions.

The 2022 title game will be played in Regina. The West Division champion will be designated as the home team next year.

Hamilton is set to host its first Grey Cup game since 1996.

When the city’s 25-year drought as CFL championship game host ends on Sunday, Montreal will become the CFL city to have gone the longest without hosting a Grey Cup (2008, 13 years).