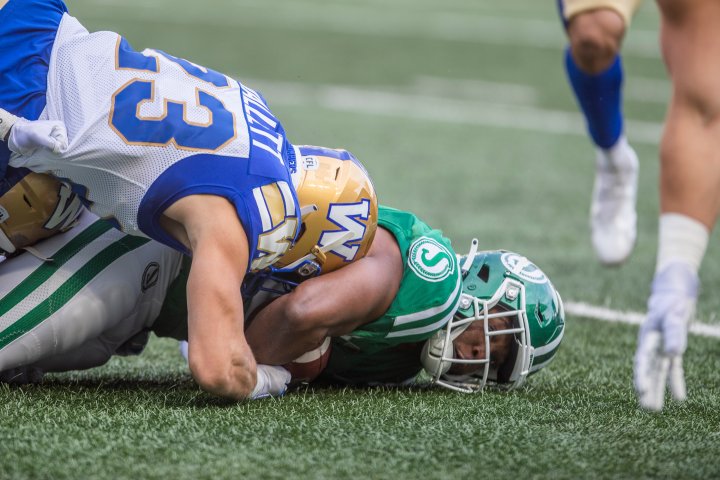 The Saskatchewan Roughriders are looking for redemption in their upcoming rematch against the Blue Bombers, yet they will have to do so without some key starters

After losing the Labour Day Classic 23-8 against the visiting Winnipeg Blue Bombers, the Riders are set to make the return trip to the Manitoba capital without a number of veterans due to injuries and suspensions.

Defensive backs Ed Gainey and Loucheiz Purifoy have been placed on the one-game injured list. Linebacker AJ Hendy will move up to Purifoy’s defensive back spot while former NFLer Christian Campbell will make his CFL debut, replacing Gainey. Canadian Godfrey Onyeka will also move into a starting spot, replacing Hendy at linebacker.

On offence, the Riders will be without one of their primary pass catchers as receiver Jordan Williams-Lambert has also been placed on the one-game injured list. Canadian rookie Kian Schaffer-Baker will move into the starting wideout spot, while Justin McInnis will come on to the active roster in a backup role. Fullback Albert Awachie is also out this week, as Alexandre Dupuis starts in his place.

And if injuries weren’t enough, the Riders are also dealing with a suspension, as defensive end A.C. Leonard has been suspended two games for failing to provide a drug sample following the Labour Day Classic.

It appears there is some good news though, as defensive tackle Micah Johnson is listed as a starter after missing last week’s game with an ankle injury. However, there’s no doubt the Green and White will have a depleted lineup as they try and rebound against the Bombers after Winnipeg handed Saskatchewan its first loss of the season.

“I think the guys are excited to hopefully wash some bad taste out of our mouth.”

Fajardo was hard on himself following the game, in which he threw a career-high three interceptions. And while he was hard on himself, the Winnipeg top-ranked defence was arguably harder on the second-year starter, who’s looking for a bounce-back performance on Saturday.

“Limit the turnovers, that’s my number one goal,” Fajardo said. “Go out there, execute the game plan and hopefully we give ourselves a chance to win in the fourth quarter.”

Not only will the Riders go up against that same Winnipeg defence, but the Saskatchewan offence will be facing a loud crowd at Investors Group Field, making communication an issue as well in the Riders’ first road game of the season.

“We know that this time it’s going to be tough on us,” Fajardo said. “The one thing is you can’t be too complex when you’re playing on the road in hostile environments because the more complex you get, the more communication you need.”

One thing the Riders are hoping can get going on Saturday is their rushing attack. Running back William Powell put up just 44 yards on eight carries, which marked his fewest touches in four games this year. And while he would have liked more work, the CFL veteran man knows sometimes the ground game isn’t always in the cards, especially when facing a defence as good as Winnipeg’s.

“They’re a great team,” Powel said. “They’re a great defence so you’ve got to be clicking on all cylinders. We weren’t executing like we usually are. So we have to step that up a notch this week and know that we’ve got to raise our game up a level.”

Kickoff on Saturday is at 2 p.m. SK time.