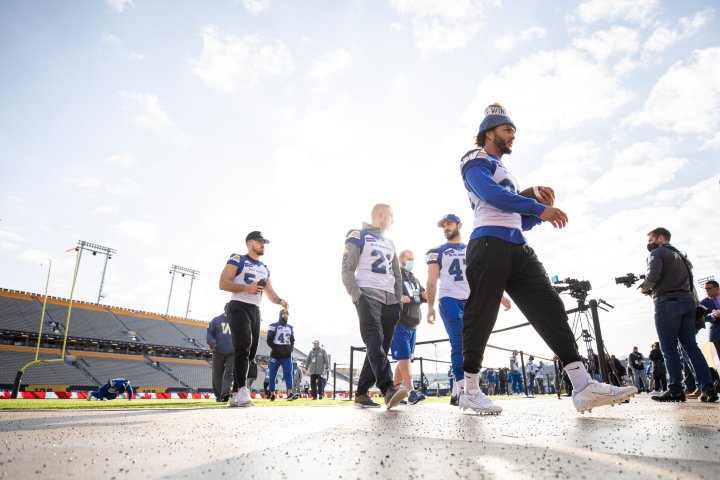 Those who made the trip to watch the Winnipeg Blue Bombers probably couldn’t believe their eyes when they stepped outside in Hamilton on Saturday.

The sun was shining and it was 15 C before noon — such a departure from the freezing conditions the Bombers persevered through just six days prior in Winnipeg.

“It’s nice to get the lay of the land,” running back Andrew Harris told the media. “Beautiful day, sunshine, it’s great to be out here.”

“We were hoping for -10,” head coach Mike O’Shea said with a grin. “We’re not going to get it. Mother Nature doesn’t always do what we ask. But I think the guys are enjoying this day.”

It’s the Bombers’ first time on the field in the Hamilton Tiger-cats stadium since July of 2019. All week long, they’ve been practicing at nearby McMaster University, mimicking the typical experience a road team would have throughout the regular season.

And while Winnipeg’s not always the calmest city when it comes to wind, some in Hamilton were surprised with the sustained gusts near 50 km/h.

“I’m soaking all this in,” Bombers’ kicker Sergio Castillo says.

Even though his job will likely be the most affected by the weather tomorrow, he’s not concerned.

“It took me seven years to get here … I’m just living day by day.”

“I guess it’s good for me that I’ve played in something like that before,” said Bombers quarterback Zach Collaros, who spent four seasons with the Ticats.

“If that’s what it’s going to be like tomorrow, (we’re) really just trying to stay focused on the task at hand.”

When two teams have made it to the ultimate game as the Bombers and Ticats have, the days leading up to kickoff can feel excruciating.

But O’Shea says his club remains focused on the goal – winning a second consecutive Grey Cup.

“(As a player) I caught myself just wanting the game to show up, wanting it to be here. (But) you still have a lot of time. And if you let that time go by without doing a few of the things that you should do, you’re missing out on opportunities.”

O’Shea says the Bombers’ third and final practice of the week on Friday was the best one yet, typical of a veteran group that’s been through the pomp and circumstance a Grey Cup week brings before.

While lots of things have to be going right for the Bombers to have gotten to this point, there’s more work to be done.

Read more: Champions set to be removed from Grey Cup, replaced by Bombers or Ticats

“First is making sure we’re assignment sound,” offensive lineman Pat Neufeld says. “They do a lot of things to stop the run, so we’ve been spending a ton of time making sure we’re all going to be on the same page as best we can.”

For the past three days, both teams have made clear which way they want to play come Sunday.

“It’s got to be a physical game for us. We got to try and physically dominate the line of scrimmage, and they do a great job of being physical as well. So we have to match the intensity and just play our game that we’ve been playing all year,” Neufeld explains.

While the Xs and Os of the game plan will have to come to life on Sunday, the players are confident in the process they’ve created.

“We have a genuine care and love for each other in that locker room, Everything we do is for those guys in the locker room next to us,” Harris says.

“Our coaches have done a great job of making the game plan, teaching it to us,” Collaros says. “I thought we had a good week of practice.”

“Now it’s on us to go out there and execute”