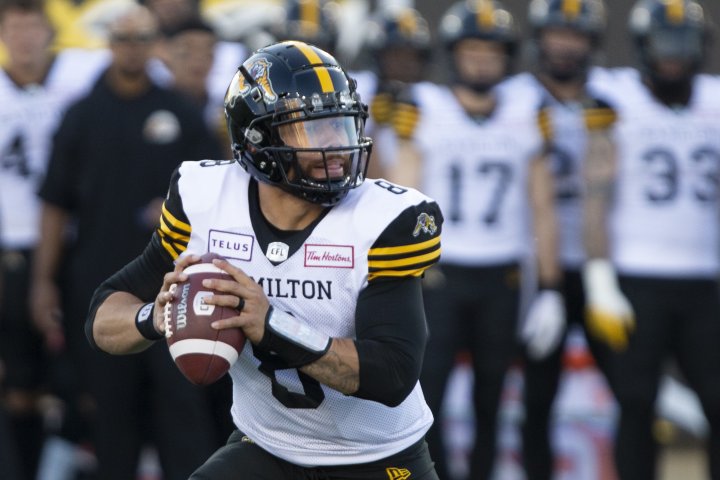 The Hamilton Tiger-Cats have named Jeremiah Masoli their starting quarterback when they kick off the 2021 CFL season Thursday night in Winnipeg.

“Jeremiah Masoli will run out and start for Hamilton Week 1,” said Steinauer. “He attacked his rehab, he came in in shape, no setbacks along the way, so we’re comfortable with our decision.”

“Jeremiah Masoli will run out and start for Hamilton in Week 1.”

Coach Steinauer, @speedybanks87 & @Jaelon_Acklin spoke to the media after Day 1 of practice ahead of Thursday’s game in Winnipeg.

The season opener at IG Field will mark Masoli’s first game since he suffered a torn ACL against the Blue Bombers on July 26, 2019.

Masoli’s injury caused the soon-to-be 33-year-old QB to miss the remainder of the 2019 campaign and thrust Evans into the starting role.

In his first extended time as Hamilton’s starting pivot, Evans completed 72.2 per cent of his pass attempts for 3,754 yards and had 21 touchdown passes and 13 interceptions.

Masoli guided the Cats to a 5-1 start before getting hurt, recording a 71.4 completion percentage, 1,576 passing yards, nine TDs and seven interceptions.

The Ticats finished the 2019 season with a record of 15-3, the franchise’s best-ever result, but Hamilton lost to Winnipeg in the Grey Cup championship.