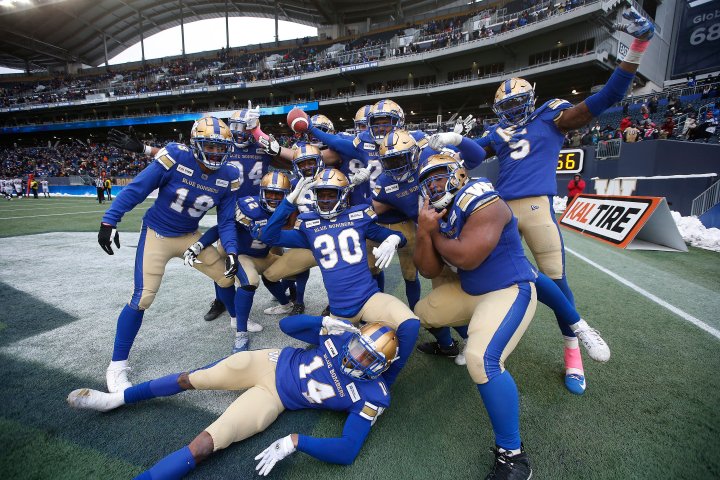 Winnipeg Blue Bombers defensive back Nick Taylor has had an unusual football journey.

So it feels appropriate that the 32-year-old from Hollywood, Fla., was a key cog in the defence that helped the Bombers capture a long-awaited Grey Cup title last year.

Taylor made an appearance on The Start on 680 CJOB Tuesday morning, kicking off a month of looking back at that incredible run to the Grey Cup title, which began Nov. 10, 2019, with a big West semifinal win in Calgary.

But it didn’t start off well. The Stampeders led 7-0 late in the first quarter and were driving for another score when Mike Jones made what Taylor believes to be the play that saved the Bombers’ season.

“It was really cold. And you know, you get that feeling like, ‘Here we go again. That darned Calgary team, can’t get over the hump. They’re just so tough,”’ Taylor said.

“And then he made that interception. We were able to hang in the game and then all the momentum was shifting and we were like, ‘Man, we can beat those guys.’ That interception was the biggest play of the game.”

The Bombers trailed 14-8 at the half and didn’t allow another point en route to a convincing 35-14 win at McMahon Stadium, which had been a house of horrors for years for the club. Taylor also picked off Bo Levi Mitchell in the win.

For a while, though, football wasn’t on Taylor’s mind. After his sophomore year of high school, Taylor made the decision to focus entirely on basketball, which led him to Florida International University where he was the point guard on the men’s basketball team.

But his love of football was nagging at him.

“My junior year of college I decided I wanted to get back to football but I was just so busy with basketball,” Taylor said. “So my last year, I just went for it, started training, went to a pro day, killed it, and I ended up signing with the Minnesota Vikings.”

From the Vikings’ practise squad to the Orlando Predators of the Arena Football League to a two-time Grey Cup champion, first with Ottawa in 2016 and now with the Bombers.

He has two gorgeous rings from his CFL journey, the most recent of which he marvelled at with his family when he received it this summer.

“They thought it was amazing. It’s just so beautiful,” Taylor said. “It sucks that we didn’t get to celebrate it up there with you all, with all the fans. It had to get sent through the mail. It was still amazing to have it in your hands. All the memories of what you went through for it just came rushing back. It was a great moment.”

But he promises to be more careful with this one than he was with his Ottawa ring, which he decided to wear one night on the town.

“I went out one night and I do not remember what happened to it that night. I lost it. I was fortunate that my friend actually had it. I was losing my mind. I said, ‘I’ll never wear that out again.’ So mine is just in a nice safe place, just sitting there.”

Tuesdays For The W in November

Join 680 CJOB this month as we look back on that magical 2019 run to the Grey Cup for the Winnipeg Blue Bombers. Each Tuesday this month coincides with a one-year anniversary of a big win:

Each Tuesday morning on The Start, tune in for a special edition of Breakfast With The Bombers after the 7:30 a.m. news.

Then, join Christian Aumell on the CJOB Sports Show for an in-depth look back at the run that captured the hearts of fans across the province. Guests will include Mike O’Shea, Zach Collaros, Justin Medlock, and many more.

You can also tune in to Global TV Thursday, Nov. 26 at noon for a one-hour special looking back at the memorable Grey Cup Parade and celebration at The Forks.