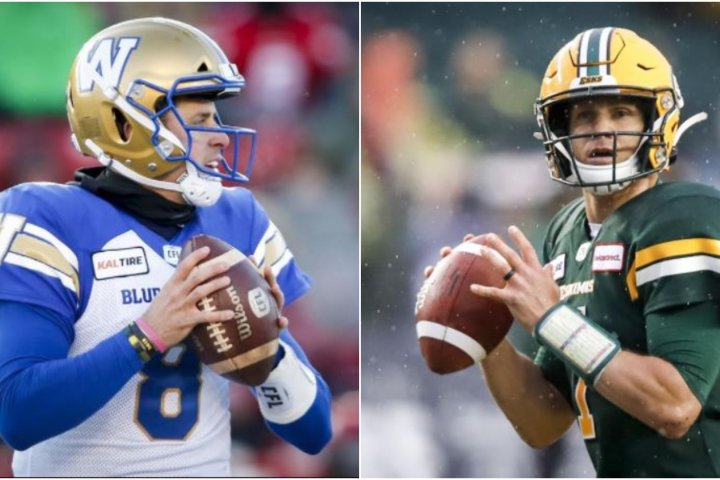 Quarterbacks Zach Collaros and Trevor Harris may be foes on the football field, but they’re also friends who support each other.

Harris and the Edmonton Elks (2-5) visit Collaros and the CFL-leading Blue Bombers (7-1) Friday, marking Harris’s return to action after sitting out the past two games with a neck issue.

One of the games Harris missed was Edmonton’s 37-22 home loss to Winnipeg on Sept. 18, but he and Collaros talked before the game.

“He kind of gave me some reassurance on some things that I was feeling and going through,” Harris said earlier this week.

“He was just basically giving me some really good advice, and so I’m obviously thankful for him and his friendship and helping me out with that.”

Collaros said he met Harris when both were CFL rookies with the Toronto Argonauts in 2012 and they became roommates. Their brief chat last month was during pre-game warmups.

“I wasn’t exactly sure what he was going through, but I’ve been through some stuff that was neck-related, head-related, all those things,” Collaros said Thursday.

“So I said, ‘Hey, give me a call if you ever want to talk about those kind of things,’ and he knows that.”

Harris said he felt good to play last week, but staff decided to err on the side of caution and hold him out.

Edmonton’s offence will have a big challenge facing a Winnipeg defence that leads the league in fewest points allowed with a 13.4 average.

The task escalates in the fourth quarter, when the Bombers have outscored opponents 68-6. Those six points translate into a 0.75 point average in eight games, topping the CFL’s all-time records since 1958.

Winnipeg is on a five-game win streak, while Edmonton has lost its past three games and sits last in the West Division.

“If we’re going to play some good ball and start a run, we’ve got to start against the best and so it’ll be a fun challenge for us and we’re really looking forward to it as a unit,” Harris said.

Winnipeg’s offence will be without league-leading receiver Kenny Lawler, who was suspended by the team for Friday’s game following his arrest Monday for impaired driving. He’s racked up 703 yards and four touchdowns through eight games.

Lawler’s roster spot will be taken by rookie receiver Kelvin McKnight. He’s caught 10 passes for 71 yards and no TDs in three games but hasn’t played since Aug. 29.

The Bombers had a bit of a scare this week when receiver Drew Wolitarsky missed the first practice, but he’s good to go against the Elks and said the club has great depth to replace Lawler.

“This is a little bit of adversity for our team, so this will be a great test of how we respond and fill in,” said Wolitarsky, who left last week’s 30-9 victory over the B.C. Lions with a leg injury.

Winnipeg’s offence had its best outing of the season last week. Collaros completed 28 of 33 passes for a season-high 417 yards and two touchdowns against the Lions. He tops the league in passing yards with 2,148.

Collaros said players are striving to get better and not be complacent.

“Being in first place right now, we’re going to get everybody’s best shot and that’s what you want as a competitor,” he said.

Read more: ‘Stove’s a different animal’: Blue Bombers get 3 players back from injury for tilt with BC Lions

Elizondo was encouraged by his team’s work this week.

“We had three good days of practices, probably the three best practices that we’ve had, so we’ve got to come out and play,” he said.

“We’ve got to play four quarters and we’ve got to make sure we come out with the right energy.”