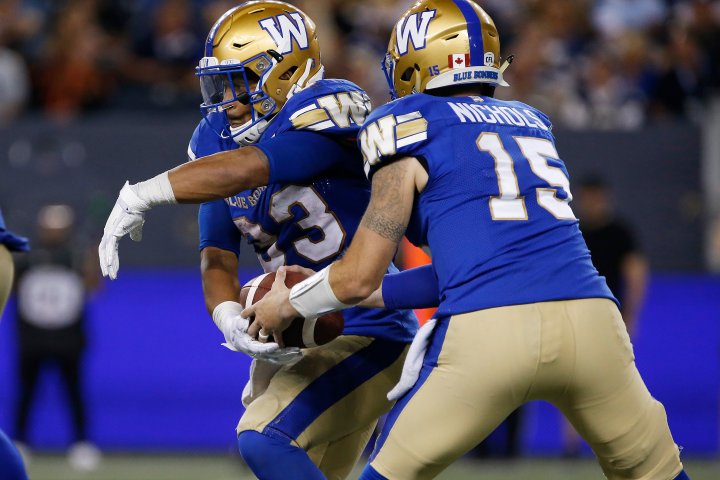 Neither Matt Nichols or Chris Streveler are Winnipeg Blue Bombers any more. Nichols is now a member of the Toronto Argonauts after being passed over by the Blue Bombers in favour of Zach Collaros. Streveler played out his contract and eventually signed as a free agent with the NFL’s Arizona Cardinals.

But the two former teammates remain close friends, and so when Streveler made his NFL regular-season debut for Arizona last month — and perfectly executed a third and one to move the yardsticks during the third quarter of the Cardinals season-opening 24-20 win over San Francisco — let’s just say Nichols had a little of the “proud papa” thing going over the accomplishment of his young protege.

“I remember clear as day when he initially came in, and just his attitude and how he was as a professional,” said Nichols from his off-season home in Spokane, Wash. “How he’s grown, and someone I have tremendous respect for, one of my best friends. We talk every single day.”

Nichols was the established starter and Streveler was a fresh out of college rookie when the two became teammates back in May 2018.

But a freak injury to Nichols in practice, just before the final preseason game that spring, expedited the teacher and student process between the two. And it set the foundation for what would become a terrific relationship between the two quarterbacks.

“I think you’re going to have a special bond with someone when you spend two years of 5 a.m. hot tub, cold tub, film sessions,” Nichols recalled. “You cover all spectrums of life with each other. So we definitely have a great friendship and I’m just super proud of him and what he’s done.”

And what Streveler did was go into Arizona’s training camp and win the backup job to Kyler Murray — an achievement that Nichols can’t say enough about.

“It’s hard to do what he’s doing. He took the long road and never lost focus of what he wanted to do. He got that opportunity to get with a team, then to make the 53-man roster and win the back-up job. That just speaks to his talent level and how hard he works. I think he’s just scratching the surface for what his NFL career is going to be.”

So thankful to even be in this position. Thank you to everyone reaching out. Your love and support means more than you guys could ever know! Now the work continues. https://t.co/x20mtf48BS

Nichols hasn’t exactly been sitting back and letting the grass grow under his feet, either. Back in May, he completed his Masters at Gonzaga University with a 3.95 grade-point average, fulfilling a promise he made to himself to update the 11-year-old degree from his university days at Eastern Washington.

“I wanted to make sure I got some experience in a different field,” explained Nichols of his decision to begin work on obtaining that degree during what would turn out to be his final two seasons in Winnipeg.

“Credit to my family, allowing me to do eight hours of homework on my one off-day each week during the season. And doing a lot of nights, just making sure that when I’m done playing, I’m going to have that in my back pocket.”

Nichols isn’t quite sure yet whether he’ll use that Masters degree to eventually become an athletic director, or perhaps a sports agent. Right now he remains focused on his playing career, so he didn’t have a lot of time for reminiscing about his four-plus seasons in Winnipeg with the Blue Bombers.

“It’s not something I’m really ready to do right now. I still have a lot of things in front of me, and things that I want to accomplish,” Nichols said.

“I had some great times there and met a lot of great people, made lifetime friendships. Every pitstop you have in a sport like this, you’re going to pull some great things from, and also some not so great things from. So for me, I’m not really ready to fully reflect on my time somewhere. Right now I’m very fuelled to prepare myself to go out and help a different team to win a championship next season.”

That last comment would suggest there is still some hurt and disappointment lingering from the decision Blue Bombers GM Kyle Walter and his inner circle arrived at in electing to re-sign Zach Collaros.

Nichols, who suffered what turned out to be a season-ending shoulder injury midway through the season versus B.C. and who eventually elected to have surgery, says he pushed himself hard to be ready to go to war for Toronto, had COVID-19 not derailed the 2020 season.

“I would have been ready to go, but obviously with any injury, the more time you can give it, the more stable it becomes and gets back to 100 per cent normal. You’re not putting yourself at risk,” said Nichols, who is spending his down-time working with mainly high school quarterbacks at an academy in Spokane operated by former Edmonton and Winnipeg defensive lineman Greg Peach.

“Maybe had we played right away, you never know what’s going on inside — if you landed on it again or something like that. Now it takes any tough decisions away or anything like that.”

No one really knows for sure what 2021 will bring with so much uncertainty around the effects of the pandemic, but Nichols would have loved to have had the opportunity to return to Winnipeg this fall, had the CFL bubble concept come to fruition.

“I was hoping for it. I think it would have been a pretty cool story and would have given me a lot of incentive, and just the comfort level of playing in a stadium that I played in for a long time. So to me, it sounded like a great thing.”

He said he would have liked to have been part of something that might happen once in the history of the league.