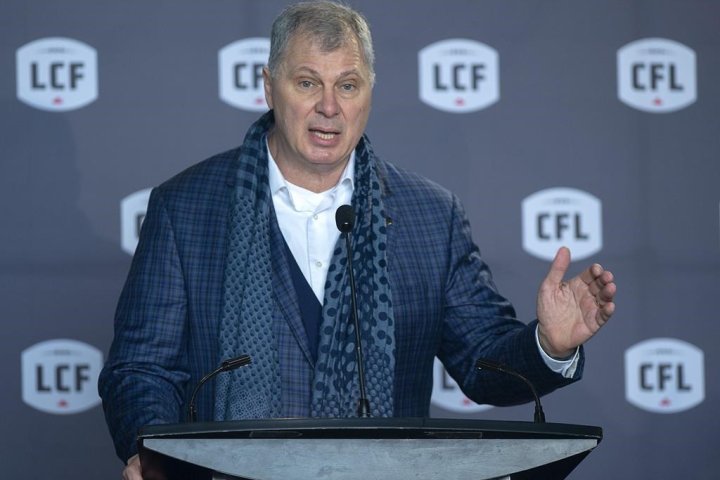 Commissioner Randy Ambrosie says the CFL remains committed to returning in 2021, but is leaving the door wide open regarding exactly how that will look.

The CFL didn’t play in 2020 due to the COVID-19 pandemic. Plans for an abbreviated season were shelved in August after the league failed to secure a $30-million, interest-free loan from the federal government.

The CFL unveiled a full 18-game schedule for all nine teams last November, one that Ambrosie said it remains on track for in 2021.

However, the commissioner added the league is keeping all of its options – including teams playing fewer than 18 games – open.

“We’ve got a schedule in place and we’re committed to it,” Ambrosie told The Canadian Press. “Our real focus is on all the planning that’s going to have to go into executing against that and also having maximum adaptability because there’s no doubt we’re going to have to make adjustments to our plan.

“We just need to be ready at a moment’s notice to make those adjustments . . . that’s really how we’re planning our business. We’re committed to being on the field in 2021 . . . we’re just keeping all of our avenues open.”

The CFL made repeated pitches to Ottawa last year for funding it maintained was essential for an abbreviated season. Ambrosie repeatedly stated the league had collectively lost around $20 million in 2019 and a source familiar with the situation said the CFL lost between $60 and $80 million by not playing in 2020.

The source was granted anonymity because the league has not revealed its financial results for 2020.

The reported losses would suggest the CFL – which is essentially a gate-driven league and generates limited revenues by not playing – could have to approach government again for assistance in order to get back up and running. Ambrosie said while the league has maintained dialogue with the government since August, it’s not basing a return to play solely upon securing financial assistance from Ottawa.

“One of the things we take away from 2020 is we’re trying not to hinge our future on any one issue,” he said. “We’re looking at our solutions holistically, we’re being as creative as we can be on any one of a number of fronts so that we find a way to play.

“We’re certainly, like almost all businesses, wearing the battle scars of what has been a very, very difficult time. That’s why we’ve been focused on looking for as many creative solutions to potential revenue streams and funding solutions . . . in the end I think it’s going to be a combination of several things that will fall into place and that’s why we’re focusing on creativity and thoroughness.”

But there’s no denying the importance of fans in the stands for CFL teams. So pushing back the start of the season until August or September could allow for more Canadians to receive their COVID-19 vaccination and thus be able to attend games.

“We’re leaving no stone unturned in pursuit of being ready and flexible to so that we play a lot of football this year and ultimately culminate in a great Grey Cup game in Hamilton.”

Another key element of the CFL’s 2020 plan was the adoption of a health-and-safety plan that it ultimately presented to the Public Health Agency of Canada for approval. Ambrosie said those protocols are currently being amended and tweaked for another presentation to Canadian health officials.

“We had a pretty good playbook for health and safety but it’s going to have to be reviewed thoroughly and refreshed,” he said. “There’s no doubt government is going to be involved ultimately in the approval of our return-to-play plan.

“So you try to look at it from every stakeholders’ point of view and make sure when you get to that time of presentation that you have the best possible chance of getting approval.”

The CFL is also watching with interest how the NHL operates this winter. The league is running with four separate divisions, including all seven of its Canadian franchises playing in the North Division and only playing against each other.

Last year, the CFL eyed having all of its nine teams playing in one division in Winnipeg, its proposed hub city. The 2021 schedule is calling for games to be played in all nine stadiums across Canada.

“We’re watching closely (the NHL) for their experience and what they’re learning,” Ambrosie said. “We’ve received tremendous support from all leagues, including the NHL, just to really help us think through the challenges we might face through the lens of what they’re currently facing.”

The CFL and CFL Players’ Association have also resumed meeting on return-to-play matters, although Ambrosie said the two sides have been talking since the fall.

Earlier this month, Greg Quick stepped down as the CFL’s director of global scouting to become a defensive and special-teams assistant with the Montreal Alouettes. The move wasn’t surprising given Quick is a career coach with 40 years of experience in Canada and the NCAA. Ambrosie said Quick’s departure won’t impact the league’s April 15 global draft.

“Greg Quick is a football guy and you have to love that he’s going to be as close to the game as a guy can get without strapping on cleats and a helmet,” Ambrosie said.