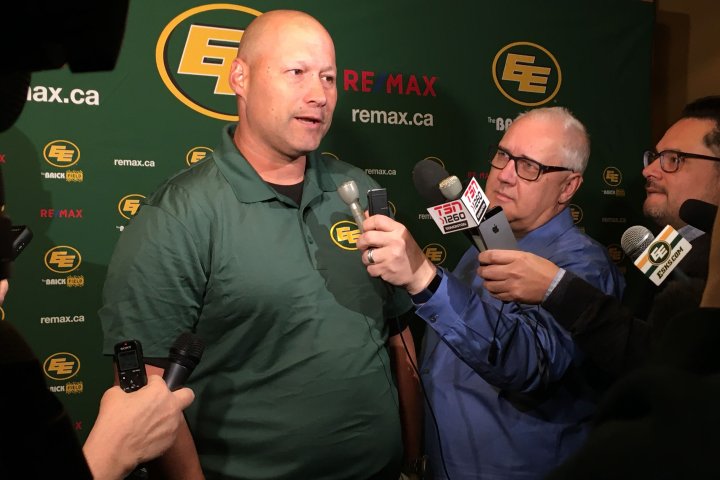 It was virtually and for roughly 35 minutes, but the gang was back together again.

Scott Milanovich, Mike O’Shea and Orlondo Steinauer opened the Grey Cup Unite coaches availability Wednesday. The CFL is staging many of its annual championship week events virtually after cancelling its plans for an abbreviated 2020 season in August because of the COVID-19 pandemic.

Milanovich, O’Shea and Steinauer are now head coaches with Edmonton, Winnipeg and Hamilton, respectively. But they’ll forever be attached at the hip for their association with the ’12 Toronto Argonauts.

That was Milanovich’s first CFL head-coaching job and both O’Shea (special-teams co-ordinator) and Steinauer (defensive backs) were on his staff. Milanovich retained O’Shea — who began his coaching career in 2010 under Jim Barker — but gave Steinauer his first CFL coaching job after a lengthy interview.

“I knew more about Osh (O’Shea) because he’d been Jim’s special-teams co-ordinator and they’d had great success so Osh was an easy one,” Milanovich said. “I gave (then defensive co-ordinator) Chris Jones a lot of latitude with the defensive staff hirings and we sat in there with O (Steinauer) for a long time and he was so patient.

“It was really all about character, not even Xs and Os, and finally O was, ‘Guys, all I can tell you is I’m a good guy, you can trust me and this is going to work.’ Two of my favourite guys in the business. They’re great coaches… I had no doubt they’d go on to be highly successful.”

The trio was able to grow — and win — together. Toronto (9-9) finished second in the East Division standings but went on to capture the 100th Grey Cup with a 35-22 victory over the Calgary Stampeders before over 50,000 spectators at Rogers Centre, securing Milanovich coach-of-the-year honours.

He and O’Shea were able to reconnect and square off as head coaches in 2019, including Winnipeg’s 33-12 Grey Cup win over Hamilton in Calgary. Steinauer was named the CFL’s coach of the year following the Ticats’ franchise-best 15-3 regular-season record.

Steinauer, who was a five-time CFL all-star defensive back and twice a Grey Cup champion during his 13-year playing career with Ottawa, Toronto and Hamilton, also recollected his job interview with the Argos.

“I was fired up to get on the board and they had three people there reading body language and that,” Steinauer said. “I remember just slamming my hand down and saying, ‘I get it, it’s got to be character first. You’re going to have to try it or not.’ Thank goodness he tried it.

“I saw how Scott went about his business in his first role and I’ll speak for myself and I know Osh is built the same way… the fact Scott was able to be coach of the year, I took great pride in that because I didn’t want to let anyone down. That staff, we went to work and grinded… I hope I get a chance to work with these guys at another time in my coaching career. Great memories and obviously when the confetti falls that’s the ultimate goal, the icing on the cake but the people were just as good as the confetti.”

O’Shea entered the coaching ranks following a brilliant 15-year career as a standout linebacker with Toronto and Hamilton. O’Shea amassed 1,151 career tackles (second all-time, most by a Canadian) and was named the CFL’s top rookie (1993) and outstanding Canadian (’99) while winning three Grey Cups as a player.

“Every day was an amazing learning opportunity for me,” O’Shea said of the ’12 Argos. “I thought we worked pretty darn hard but we also had a lot of fun doing it.

“I just happened to watch the replay of the 100th Grey Cup and Scott’s a no B.S. guy right, so when Larry Taylor pumps off a couple of returns the (look) I’m getting on the sidelines is awesome. That kind of accountability was terrific, it certainly helped guide me in my process of becoming a head coach. I wouldn’t trade those couple of years on that staff for anything, it was awesome going to work every single day.”

While the novel coronavirus has put Milanovich’s CFL return on hold, it has given him time to get re-acclimated with his new surroundings.

“It’s such a rush that first year getting your staff put together, picking the offence, defence and special teams that you want, getting scripted for training camp and getting schedules done,” he said. “What this has given me an opportunity to do is more in-depth research on Osh’s team, Orlondo’s team, Dave Dickenson’s team.

“I can tell you I’m much more familiar with the CFL sitting here today than I was eight months ago. Obviously we’d rather be getting ready for the Grey Cup right now but there have been some silver linings.”

And in 2021, Milanovich will get to match wits on the sidelines with Steinauer and O’Shea. But Milanovich said often more effort goes into preparing to face friends and coaching rivals than unfamiliar foes.

“You want to say, no, you don’t, that you give everything you have for every single game you play but I’m not sure that’s true,” he said. “Your closer friends and guys you may hate, guys you may love you may have a little extra focus because you know you’re going to hear about it.”

Case and point was 2010 when Milanovich was Montreal’s offensive co-ordinator and preparing to face good friend Barker, then Toronto’s head coach, in the East Division final. The Alouettes won 48-17 en route to a second straight Grey Cup title.

“I probably never worked harder in my life on the gameplan than I did in that one,” Milanovich said. “I could imagine what Jim Barker would be saying had they beat us and gone to the Grey Cup that year.

“Now it’s harder because I know pretty much every head coach in the league personally. I’ve played Mike a bunch, I haven’t had an opportunity to play against Oh as a head coach but I’m looking forward to it.”

Watch below: Some recent videos about the CFL.

1:58 CFL players are getting back to work after season cancelled