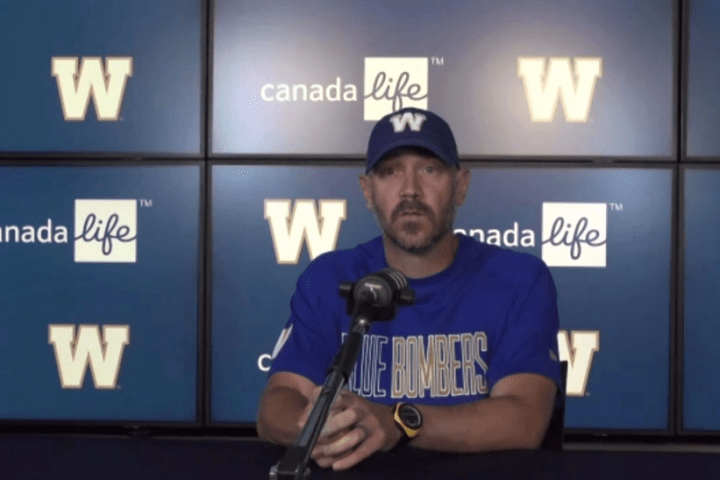 It has been an anxious calendar year, and then some, for everyone connected with the Canadian Football League, and that would certainly include Buck Pierce of the Winnipeg Blue Bombers coaching staff.

Pierce has been waiting patiently since Jan. 21 of 2020 when he was officially promoted from quarterbacks coach to offensive coordinator after Paul LaPolice was hired as the head coach of the Ottawa RedBlacks.

With the start of Bombers training camp just under three weeks away, Pierce will finally get the chance to roll up his sleeves in his new position.

During a lengthy Zoom call availability session with members of the Winnipeg media Tuesday, the former quarterback said it wasn’t like he and his position coaches have been doing crosswords and bingeing on Netflix during the unexpected downtime that resulted from the cancellation of the 2020 CFL season last August amid the COVID-19 pandemic.

“You know we didn’t stop. Obviously, it was extremely hard,” admitted Pierce. “We’ve continued to work and use this time to our advantage. Continuing to look at what we do internally and then other trends throughout the league, what other teams are doing — defenses, situational football. All those different aspects we’re able to dive into a little bit deeper.”

Pierce says the initial reaction to last season’s cancellation, and then dealing with that mentally, was not easy. But then just like when he’d get sacked or intercepted as a player, he picked himself up and went back to getting the job done — just with more time to prepare than was originally anticipated.

One thing Winnipeg’s new OC wants to set the record straight on, is this will be the Blue Bombers’ offense and not Buck Pierce’s. “The players are going to determine what we look like,” Pierce said when asked how he was going to structure the offensive playbook. “We believe we have a veteran group and we do things well that we’re going to continue to do, but also building on those things.”

Smash-mouth football would definitely be near, or at the top of those list of things Buck Pierce was referring to. In 2019 the Blue Bombers rushed for a league-best 2,663 yards, averaging almost 148 yards per game and just a touch over 32 minutes in time of possession. So Pierce doesn’t see the need to stray too far away from that identity.

“I think every offense wants to have a balance, you want to be more than one-dimensional. Teams understand we can run the ball,” explained Pierce.

“We believe that we’re the most physical team in the league, and we’re going to play to our strengths.”

Excellent strategy considering Grey Cup MVP running back Andrew Harris is coming off three consecutive CFL rushing titles, and all five starters are returning to form what is believed to be the league’s best offensive line.

Read more: ‘You expect to go out and win’: No lowered expectations for Bombers for unorthodox CFL season

But as dominating as Winnipeg’s ground game has been since Harris returned to his hometown in 2016, the Blue Bombers aerial attack has been average at best. In 2029, the team was ranked at or near the bottom in most passing categories, so that would seem to be an area Pierce and his offensive coaches would be looking to improve. It certainly won’t hurt to have Zach Collaros at the controls right from the get-go.

Pierce says he has used the extended downtime to get to know his starting quarterback both professionally and personally.

“Throughout the last couple of years, we’ve all seen what Zach can look like on the field and what he can do. When he came to us in 2019 and put those four games together, he showed flashes of his physical ability — what he can do with a football and [to] lead an offense,” said Pierce. “Zach is at a point now where we’re wanting to build on those positive things that he does. He’s a guy who is extremely coachable, he’s very hungry. He’s driven to be better and continue to improve his game.”

When Winnipeg GM Kyle Walters made the difficult decision to cut ties with former starter Matt Nichols and make a long term commitment to Collaros, it was — and still is — seen as somewhat of a calculated risk, considering the past concussion issues the current Blue Bomber No.1 pivot has dealt with the past couple of years. Especially with an untested trio of Sean McGuire, Dalton Sneed and Drew Brown lining up behind Collaros on the Blue Bombers’ quarterback depth chart.

But Pierce sees a lot of potential in all three and feels McGuire has come a long way in his development despite not having any opportunity to add some much-needed playing time to his resume. “He has all the physical attributes that you want at the quarterback position. But also Sean has the ability to really lead as well,” Pierce said of the second-year backup. “Not just vocally, but his work ethic, how he carries himself. Those attributes you might not see unless you really get to know somebody, be around them all the time.”

This will also be Pierce’s first kick at the cat when it comes to being in charge of play-calling, although he says it won’t be an entirely new experience. “For the last four or five years I’ve been with coach LaPolice designing game plans — that’s what we did. How we want to win a game this week, what formations we want to be in — all those things,” explained Pierce, who also inherits an experienced staff on the offensive side of the ball, so he won’t need to spend a lot of time teaching how things are done the Bomber way. “They understand our plan, they understand our vision, what our players do well, and what our players need on a daily basis. I’m extremely lucky to have those guys with me.”