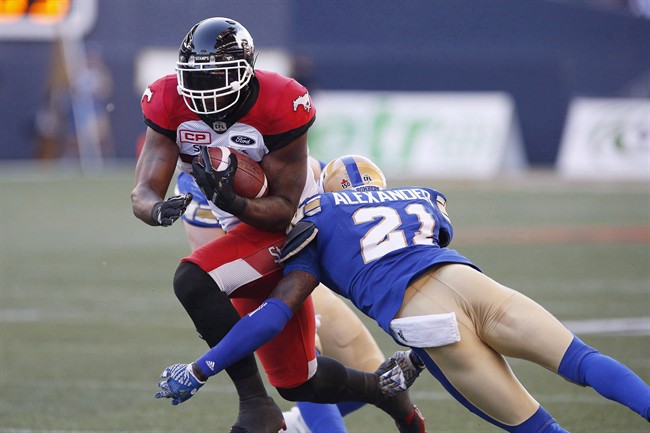 Winnipeg Blue Bombers defensive back Brandon Alexander was chosen one of the CFL’s Top Performers of the Week for week five on Wednesday.

Alexander is the CFL’s third star of the week for his part in helping beat the Saskatchewan Roughriders to spoil the party at the Labour Day Classic.

Alexander had his first career two interception game in the victory, and also contributed with four defensive tackles, and a single special teams tackle.

“It’s definitely a big thing,” said Alexander. “I really appreciate it, but to be real with you, (if) we don’t get the win or anything else, it really don’t matter to me. I just want to go out there and play for the guys.”

Alexander credited the pressure from the Bombers defensive front for helping him get his hands on the two picks.

“All season they’ve been able to be relentless and just effortless to the ball,” he said. “I know for sure on that second one, (it) was tipped by Willie (Jefferson), whether he hit his arm or something like that, and I was able to make a play on it.”

The Bombers returned to the field on Wednesday with a closed session, and it’s a short practice week with the rematch in the 17th annual Banjo Bowl set for Saturday.

But linebackers Kyrie Wilson and Jontrell Rocquemore were both back on the field in a limited capacity after missing recent games.

It was a bit of a struggle for rookie kicker Marc Liegghio in the Labour Day Classic, making just one of his three field goal attempts against the Riders. But head coach Mike O’Shea is not about to pull the carpet out from his young kicker just yet.

“He had a couple blips this last game,” said O’Shea. “He’s watched the film and he knows exactly what he did and what he needs to do differently.

“It is part of his process that he’s going to go through. Just tighten up all the little details and make sure he hits those details on each and every kick. I got a lot of confidence in Marc.”

The Bombers also added a new body on Wednesday with the signing of veteran defensive back Greg Ducre. The Bombers are the 29-year-old’s eighth different professional team. He has two games of CFL experience with the Montreal Alouettes from 2018. Ducre also spent time with the BC Lions and was released earlier this season by the Calgary Stampeders.

He also had stints with the NFL’s San Diego Chargers, Washington Football Team and Pittsburgh Steelers, appearing in nine games with the Chargers in 2014 and 2015.

The Bombers announced on Wednesday that the Banjo Bowl is now officially sold out.