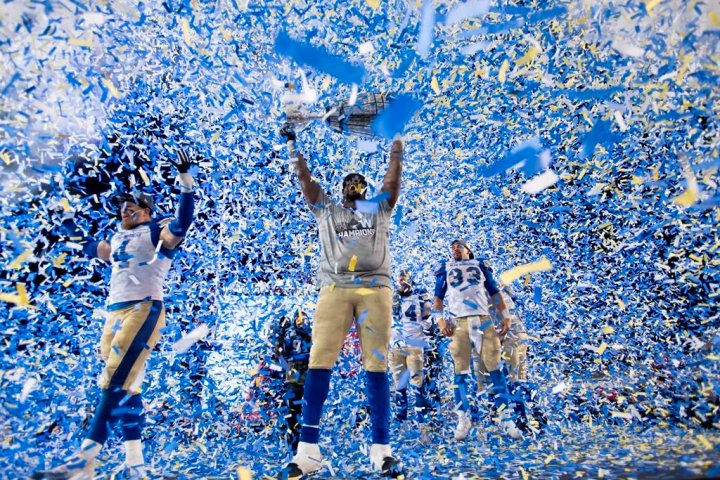 It was back in 1962 when the Winnipeg Blue Bombers defeated the Hamilton Tiger-Cats for the second year in a row for their second consecutive Grey Cup victory.

And now, 59 years later, Sunday will be a chance for the Blue to pull off the rare repeat again, against the same team they did it against decades ago.

Breaking an almost a 30-year drought in 2019 was one thing, but a back-to-back triumph?

“You know, if we can go back to back, I mean, it’s really about building a legacy and a dynasty. And that’s history right there,” said Bombers linebacker Adam Bighill. “That’s special. People don’t forget that.”

But in the way of a potential Bombers repeat, is a Ticats team looking for redemption after a crushing loss in 2019.

“2019 was a lesson for us,” said Ticats QB Dane Evans. “Winnipeg beat us. There’s no getting around it. They beat us in every facet of the game and I give them props for that. But I think we’ve learned a lesson from it and I’m excited to kick it off on Sunday.”

Some of the Ticats feel home advantage at Tim Hortons Field could come into play to Sunday.

“It’s just the comfortability,” said Simoni Lawrence. “I feel like I can’t miss tackles on this field. I feel like it’s our home. You know, you’re used to the spots and stuff and it’s cool.”

“We play in Saskatchewan on Labour Day, and you’re not going to find any more hostile conditions in that, so we’ve been prepared,” said Bombers head coach Mike O’Shea. “The guys have been around a number of years prepared for this every single year.”

“I think we have a really good mix of veteran players that have been there, done that,” added Bombers RB Andrew Harris.

“There is an advantage playing at home, but I think if you have enough leadership and enough experience, and you’re focused, it shouldn’t really matter.”

Will it be a repeat or redemption? An intriguing Grey Cup Sunday awaits us.