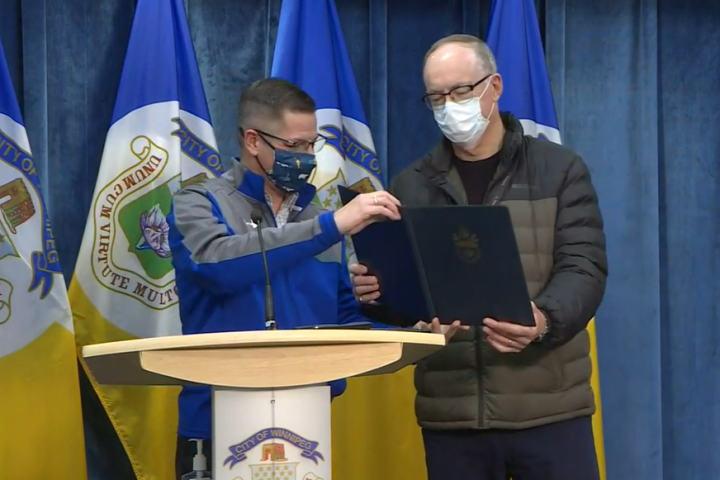 The 680 CJOB personality, who has called Bombers games for almost 50 years, will be hanging up the microphone after the Bombers take on their rivals, the Saskatchewan Roughriders, in the CFL’s West Final on Sunday.

Irving was honoured Monday morning by the City of Winnipeg for his lasting impact on the game with a community service award from Mayor Brian Bowman.

In addition to the mayor and Irving’s family, he was joined by special guests, in person and remotely, including CFL commissioner Randy Ambrosie and Jeff McWhinney, the league’s official keeper of the Grey Cup — both of whom are originally from Winnipeg.

“There aren’t many voices that are as synonymous with anything as Bob Irving’s voice is with the Winnipeg Blue Bombers,” the mayor said.

McWhinney said Irving helped define the city, and that his unique way of communicating made it feel like listeners were right there beside him in the stands.

An emotional Irving said it’s been a roller-coaster few weeks as he wraps up his storied career.

“It’s just been unbelievable,” he said.

“I grew up in Saskatchewan, in Regina, but I’m a Manitoban through and through — I’m a Winnipegger. It’s a wonderful place to raise and bring up a family.

“It’s been an honour and a privilege for me to be around the football team and just part of the community all these years.”

Irving will also be inducted into the Bombers’ Ring of Honour, the team announced last week, joining 12 iconic players and coaches.