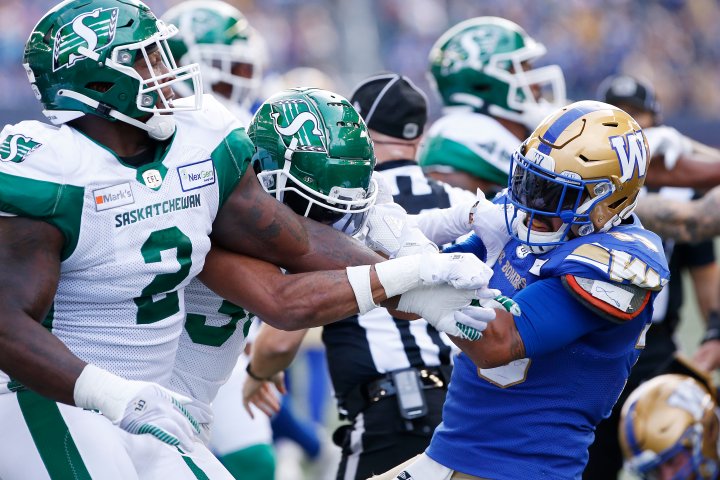 The Winnipeg Blue Bombers have been crowned victors of the 17th annual Banjo Bowl with a 33-9 win over the Saskatchewan Roughriders at IG Field.

Zach Collaros was responsible for the other two, slinging a pair of fourth quarter touchdowns to Darvin Adams and Kenny Lawler.

Bombers’ slot receiver Nic Demski notched a career-high in yards with 134, securing all five of his targets.

The Blue Bombers defense pitched a fourth quarter shutout and has only given up three points in the final quarter all season.

Collaros went 18-for-22 with two touchdowns and no interceptions.

Cody Fajardo completed 11 of 17 pass attempts for 169 yards and one interception.

Fajardo was knocked out of the game early in the third quarter after being sacked by Bombers’ defensive end Willie Jefferson.

The Rider offence, led by Fajardo, opened the game with a six play 51-yard drive, ending in a 25-yard Brett Lauther field goal.

On the ensuing Bombers’ drive, Zach Collaros led the team all the way down to the Saskatchewan one yard line.

It took backup quarterback Sean McGuire two tries to punch across the goal line but McGuire picked up his fourth rushing touchdown of the season. Marc Liegghio’s extra point attempt sailed just right as the Bombers jumped out to a 6-3 lead.

Lauther nailed a 24-yard field goal to open the scoring in the second quarter, tying the game at six.

The Bombers set themselves up for 48-yard try of their own moments later, after an Adam Bighill interception. Liegghio bounced it well short of the goal line, dropping his field goal stat line to five-and-eight on the season.

At the other end of the field, Brett Lauther stayed rock solid, making his third field goal of the game from 30-yards out. 9-6 Riders.

The Bombers answered back immediately with another scoring drive ending in a one-yard Sean McGuire plunge.

A fight followed touchdown almost instantly with both teams getting into it heavily at the goal line. Two Roughriders were ejected (A.J. Hendy and Garrett Marino), while Winnipeg’s Andrew Harris and Kenny Lawler picked up major penalties for unnecessary roughness.

After the lengthy scrum was sorted out by veteran referee Andre Proulx, Liegghio’s struggles continued, missing his second extra point of the game.

Missed kicks continued to play a huge role in the 17th annual Banjo Bowl as Lauther shanked a 50-yard try with 33 seconds left in the first half.

The gun sounded with Winnipeg grasping onto a 12-9 lead.

On a second-and-five play at the beginning of the third quarter, Willie Jefferson sacked Fajardo, sending the Rider quarterback into concussion protocol.

Fajardo did not return, meaning Isaac Harker finished the remainder of the game for Saskatchewan.

Collaros tossed strike to Kenny Lawler, who slipped behind coverage for a 39-yard touchdown to open the fourth quarter’s scoring.

Winnipeg’s quarterback wasn’t done there, though, slinging another touchdown pass to Kenny Lawler with just over three minutes left in the game.

Liegghio was on point for both fourth quarter converts as the Bombers were crowned Banjo Bowl champions.

The Bombers improve to 5-1 and lead the CFL’s west division by four points.

The Riders fall to 3-2 after back-to-back losses to Winnipeg.

Winnipeg hits the road next weekend for a clash with the Edmonton Elks at Commonwealth Stadium. It’ll be the first of three meetings between the two clubs this year.