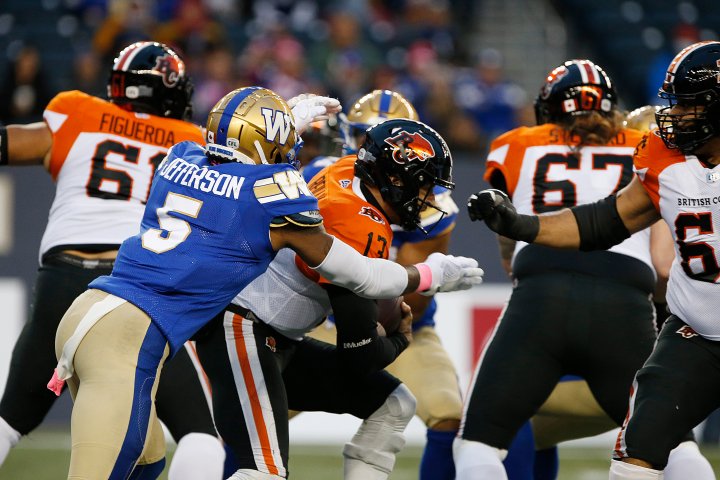 The Bombers still have three games remaining and haven’t finished atop their division since they won the east division in 2011.

That’s how godly the blue and gold have appeared all season as they stayed undefeated at home Saturday night, handing BC a fourth straight loss.

Brady Oliveira got the nod at running back for Winnipeg in place of Andrew Harris (knee) and found the end zone once in the third quarter. Oliveira totaled 65 yards rushing on 17 carries.

Kenny Lawler scored a pair of touchdowns, raising his season total to six.

Rasheed Bailey was the only other Winnipeg receiver to find pay dirt, while Darvin Adams led the team in receiving yards with 93 on four catches.

Zach Collaros threw for 267 yards and a trio of touchdowns with no interceptions.

BC’s Michael Reilly tossed an interception to Willie Jefferson in the third quarter and only managed 131 yards in the air.

Unfortunately for the Lions, that interception went 39-yards the other way for Jefferson’s first defensive touchdown of the season.

Leading 30-0 after Jefferson’s pick-six, Collaros tossed Kenny Lawler his second touchdown grab of the game. Winnipeg took a 37-0 lead with 12:50 remaining in the fourth quarter.

Before the final bell, Janarion Grant ran a BC punt 63-yards to the house sending the fans at IG Field into pandemonium. 44-0 in favour of the home team.

The Bomber defense pitched their first shut out of the season as the final score read 45-0.

Winnipeg will host the Montreal Alouettes (6-4) on Nov. 6 in what marks their final home game of the regular season.

In the meantime, the 10-win Blue Bombers will enjoy one last bye week before closing out the season with a back-to-back against Montreal and a road game in Calgary.