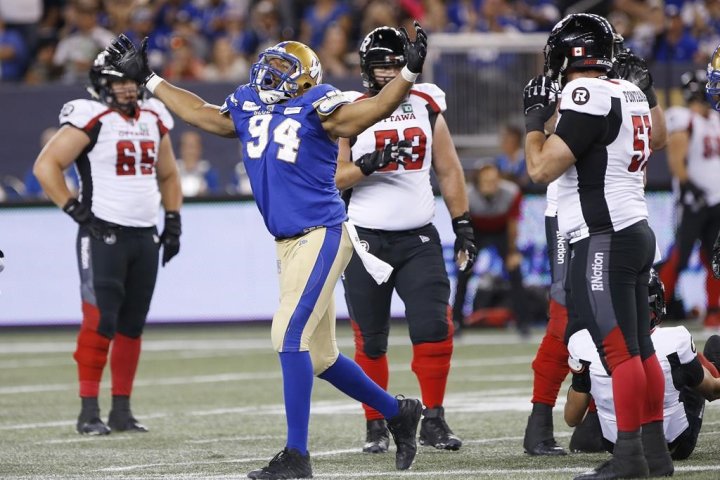 Some members of the Winnipeg Blue Bombers got a prolonged taste of Winnipeg winter at their homes south of the border last week.

Defensive end Jackson Jeffcoat, who lives in Austin, Texas, told 680 CJOB the monster storm that left millions without power and devastated the state was something to endure.

“First we lost power — I think I was without power for 55 hours or so,” said Jeffcoat.

“When we got power back, shortly after, we lost water, and were without water for five days.

“We had to do bottled water, we had to use (bottled) water to flush our toilets. It wasn’t fun.”

Going on hour 32 of no power and still no signs of it coming on! Please stay warm and safe people ask for help if needed.

Fellow Bomber Willie Jefferson also makes his home in Austin during the CFL off-season, and his wife Holly told 680 CJOB last week that it was the most snow she’d seen in a lifetime of living in the city.

“We got eight to nine inches (of snow) in our front yard, and Willie has created a little spot for himself where he’s doing the weather on his Instagram. He’s been out in the snow, in his natural habitat out there,” she said.

“It’s been a lot. It’s been more than I’ve seen ever, living here in Austin my whole life.”

Conditioning any way I can get it!!!! pic.twitter.com/wwwJ8kBSgF

Jeffcoat said Tuesday that the snow has all melted and things are getting back to normal “like nothing happened.”

“People were saying, ‘Where was this? Why didn’t we just have this weather the whole time? Why did we have to have extreme cold?’”