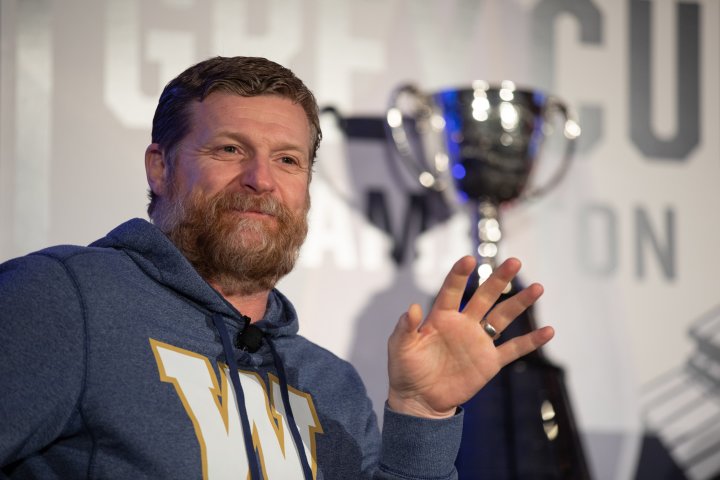 They may be in the same position as last season, but for Mike O’Shea and Orlondo Steinauer, Sunday’s Grey Cup game is a blank slate.

The head coaches for the Winnipeg Blue Bombers and Hamilton Tiger-Cats met the media in Hamilton Wednesday morning, officially kicking off a Grey Cup 108 week two years in the making.

It’ll be the same two teams as it was at McMahon Stadium in November of 2019, when the Bombers ended a 29-year Canadian Football League championship drought with a 33-12 win.

But you won’t find either coach dwelling on lessons from seasons past this week.

“We don’t carry our regular-season record into the post-season,” O’Shea says. “It just doesn’t work that way.”

Hamilton was the heavy favourite in Calgary, but the Bombers won in dominant fashion.

This time, Winnipeg is anywhere from a three- to five-point favourite at most Canadian sportsbooks.

For outsiders, it may appear that Winnipeg’s had an easy ride to this point. The team has only lost one meaningful game all season — and that was all the way back in August.

O’Shea says Sunday’s first half against the Saskatchewan Roughriders — in which the Bombers turned the ball over five times — was not the only case of his team overcoming adversity this year.

“There are a lot of untold stories. We faced adversity this year…. Not as much as other years. Most of that stays in-house.”

O’Shea says the journey has been completely different, considering the Bombers were the #1 seed this time around.

“It was hard to figure out how to facilitate creating the team you need this time of year.”

Says coming together happened in a different way.

It didn’t take long for Steinauer to make the announcement many expected: Dane Evans will start for the Ticats on Sunday.

He completed all 16 of his passes in the second half of Sunday’s East Final win over Toronto, coming off the bench in the second quarter when Jeremiah Masoli was benched.

“Experience, hunger. He hasn’t changed. He can make all the throws…. He’s a different leader than Jeremiah. You’re going to see more emotion,” Steinauer says of his starting signal-caller.

“It was never easy,” Steinauer says about managing the two quarterbacks. “I don’t like letting people down.”

There’s no such question on the other side.

Zach Collaros, presumptive Most Outstanding Player winner, is a big reason for the Bombers’ 11-3 record — and two of those losses came in games where he barely played as Winnipeg rested starters.

Steinauer got to know the Bombers pivot in the early 2010s while he was a co-ordinator in Hamilton.

“He’s a worker. It didn’t matter what kind of role he was going to have. When he got his opportunity, there was no doubt in my mind (he was going to succeed).”

O’Shea’s certainly happy with the return on investment GM Kyle Walters made just seconds before the 2019 trade deadline.

“He walked into the meeting, approached the meeting, knew how to approach the players…. I’m not sure any other guy in the league could do that.”

For both coaches, the 2021 Grey Cup will not be a complete story of their friendship — rather, just another chapter in a relationship in which the respect and admiration run deep.

Longtime Toronto Argonauts teammates, the two shared a Grey Cup victory in 2004 — and added another in 2012 as part of the club’s coaching staff.

“I just watched this man prepare, watched the commitment he had in the off-season as a player…. It’s the exact same (as a coach),” Steinauer says of O’Shea.

O’Shea says no one in the league can relate to the players like Steinauer.

“He’s just a good dude, (the kind of guy) you want to hang out and have a beer with.”

Both share important core values — part of the reason they’re in this position this week.

For both men, creating a winning culture is near the top of the list.

“When you get 70 people in a room, they’re not all going to like you. This is their job. This is how they feed your family,” Steinauer said.

“Life is going on for those guys outside (the lockerroom doors),” O’Shea added.

Creating that culture has never been more important than it has been in 2021, a year marred by changing COVID-19 protocols, and vaccination policies.

It continues this week: the Bombers will be without versatile offensive lineman Tui Eli, who was unable to travel by plane to Hamilton because of new Canadian government travel rules.

The CFL’s rulebook states players must travel with the team to be eligible to play in the Grey Cup, so Eli would have been unable to drive.

O’Shea offered up little comment on that situation in particular, but acknowledged the challenge this season has put on all teams.

“You have to start with each player individually. You’re dealing with humans. There are some very passionate conversations,” he says, explaining that he didn’t take a hardline stance at any point in the season.

Steinauer says the shifting rules and regulations made for a “tough juggling act.”

Each coach may not know what the other is planning on the whiteboard during practice this week, but they are well aware this will be a competitive game.

“He will have his guys prepared,” Steinauer says.

And even though his friend and former teammate will be on the other sideline at Tim Hortons Field, O’Shea says there will be no time to acknowledge that significance this week.