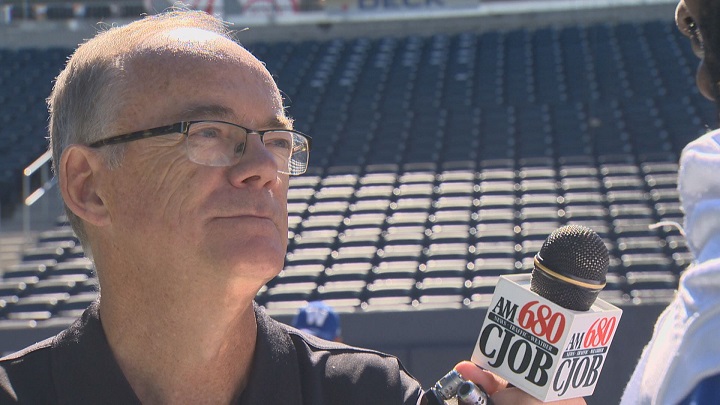 An iconic Winnipeg sportscaster will soon hang up his mic.

After almost five decades as the voice of the Winnipeg Blue Bombers, 680 CJOB’s Bob Irving is retiring. His last game will be the team’s final home game of the season — their appearance in the CFL’s West Final on Dec. 5.

In honour of Irving’s legendary career as the Bombers’ play-by-play announcer, the team is dedicating the game to him, and will host a pre-game ceremony to recognize his contributions.

Irving — nicknamed “Knuckles” — arrived at 680 CJOB  in 1973 and began his remarkable run as the voice of the Bombers the following year, racking up more than 800 games over his career. He’s been inducted into the Blue Bomber and Canadian Football Halls of Fame, had the team’s media room named after him, and was appointed to the Order of Manitoba.

“Bob has made a lasting mark with his contribution to the organization. He has been a tireless supporter of the Blue Bombers and a passionate advocate for Manitoba and the Canadian Football League.

“We’re fortunate to have been able to listen to Bob for as long as we have and wish him the best in an incredibly well-deserved retirement.”

Irving said his career as a broadcaster was an example of “living the dream.” Despite his other work talking sports on-air, his gig as the voice of the Bombers was the high point.

“I’ve been lucky to live my dream of being a sports broadcaster at one of the best radio stations in Canada,” he said.

“In nearly five decades at CJOB, I’ve covered a range of sports, anchoring morning sports for nearly 40 years, but the icing on the cake has been the chance to be the voice of the Bombers.

“I’m grateful for the tremendous support of my wife Daye, who has had my back every step of the way, and my kids, Kyle, Reid and Ashleigh, who provided similar support. It’s now time to hang up the mic and join Daye in exploring what the rest our years have in store.”