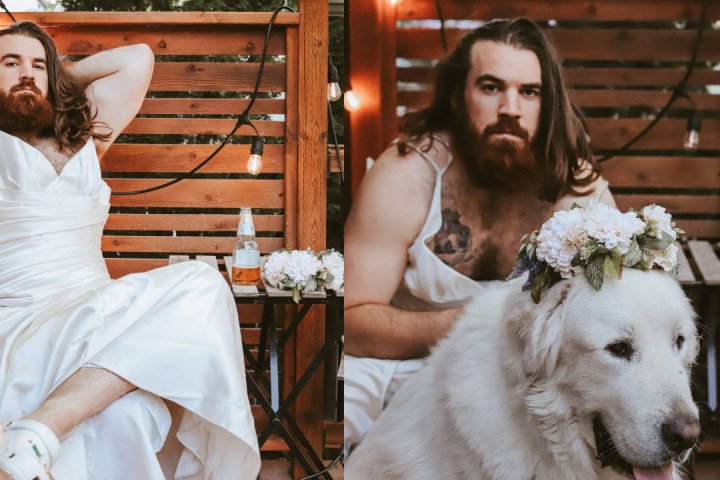 A Winnipeg Blue Bomber dressed up in a wedding gown to get his COVID-19 vaccine – and raised some money for a local LGBTQ organization just before Pride month began.

John Rush said the idea started on Twitter, after he made a post saying how excited he was to get his first COVID-19 vaccine and asked people what he should wear for the big day.

Rush said the replies to his tweet suggested starting a fundraising campaign for the Rainbow Resource Centre, in support of the LGBTQ+ community.

The pro athlete then started an online poll where people could vote between him getting decked out with a tuxedo or a wedding dress to go get his shot on Monday.

To everybody that told me to use a coat hanger to zip my dress up… HOW!? pic.twitter.com/EcPKHjxjN1

He said the goal of the campaign was not only to raise money, but to start a conversation with people about prejudice and gender stereotypes in today’s society.

Despite identifying as a cisgender straight man, Rush said he received a lot of hate on his social media platforms for simply showing support to the cause.

When that first dose of Pfizer hits ? pic.twitter.com/5SmcPKe1Qi

“This is one day in my life I’m taking the heat,” he said.

“The unfortunate reality for people in the LGBTQ+ community is that this is their everyday life.”

Rush said he reported numerous offensive posts on Instagram for harassment, but that the platform said it doesn’t go against their community guidelines.

“It was disappointing to say the least,” he said. “Social media platforms clearly aren’t taking the appropriate actions to help people and the community.”

As of Wednesday, the campaign raised more than $10,000 and the Rainbow Resource Centre thanked the Bomber for his initiative the day before Pride Month began.

“John used his platform to remind everyone that we are more than just our bodies —gender expression does not have to fit prescribed standards of masculine and feminine,” said Noreen Mian, Executive Director of the Rainbow Resource Centre.

Rush showed his gratitude to people on his social media for supporting the cause and donating, but added this is just the beginning.

“We still have a long way to go as a society before it’s truly safe for everyone and it’s up to all of us to use our voices to make it safer for everyone.”