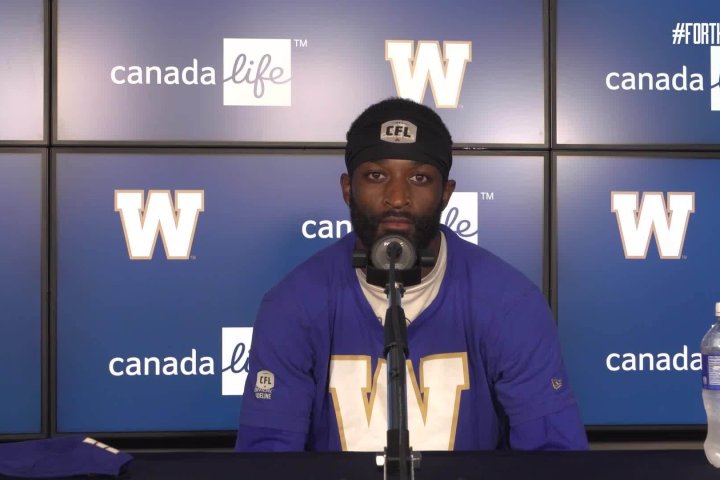 A rookie Blue Bombers defensive back says he’s happy to have his family safe, sound and together in Manitoba after a harrowing incident last week at his home in North Carolina.

Demerio Houston was in Winnipeg with the team when he got a late-night call from his wife, telling him that their 12-year-old daughter, Hi’Lynn, had been shot at their Charlotte, N.C., home.

“It was a drive-by shooting that I guess was aimed for my neighbour’s house, when a couple of bullets went into our house,” Houston told 680 CJOB.

“One hit my daughter and another went into my son’s room, just right over his head on his headboard.

“It was a devastating moment not being there to protect my family.”

Houston said Hi’Lynn, who was in bed, asleep, when she was shot in the thigh, is doing well — just trying to recover and deal with what happened, but she’s doing so in Winnipeg.

A quick decision for the whole family — Houston’s wife Ashley, Hi’Lynn, and other children Jace (7) and Cambpell (six months) — to come to Manitoba to be together after the incident was the right one, he said.

Houston credits his wife for holding it together for the family while he was a wreck, thousands of kilometres away.

“It was definitely hard to focus. My main focus was trying to get home,” he said.

“After I found out she was shot, I hurried and tried to call a few of my coaches to let them know what was going on and that I just wanted to go home.

“It was going to be hard for me to get home. It was so late, it was one in the morning, and I just was freaked out by the circumstances of what was happening.”

At Ashley’s urging, Houston said he stayed in Winnipeg and tried to practise with the team to get his mind off what had happened, but he said his “mind wasn’t there,” and it was a huge relief when the family hopped a plane to Canada.

“It was a great moment to finally have them here with me where I can make sure they’re safe … being here, away from that element and getting them away from everything.”

Houston said one of the most shocking parts of what happened is that he lives in what he always thought was a nice, safe community in Charlotte.

“Certain parts of Charlotte are rough, but where we live … it doesn’t happen.

“We really live in a safe neighbourhood, but I guess it was just one moment — an altercation with the neighbour and somebody else.”

A GoFundMe page to help the family cover medical costs and repairs to their home has raised just shy of $5,000 as of Friday morning, and Houston said the support he’s received from Bombers fans — who have barely had a chance to see him in blue and gold yet — has been incredible.

“It’s truly a blessing,” he said. “I’m new to the CFL, but they’re supporting me and my family. They’re behind us.

“Right now, me and my wife are still discussing our next plans, and whatever we do is going to be the best situation for our kids and the best for our family.”