TORONTO — Nine U SPORTS quarterbacks are set to hone their skills at CFL training camps as part of the 2022 edition of the Canadian Quarterback Internship Program.

The program, which welcomed its first class in 2010, allows Canada’s best young pivots to develop their skills and attend team and positional meetings, alongside their professional counterparts. The program returns for the first time since 2019 due to the COVID-19 pandemic. 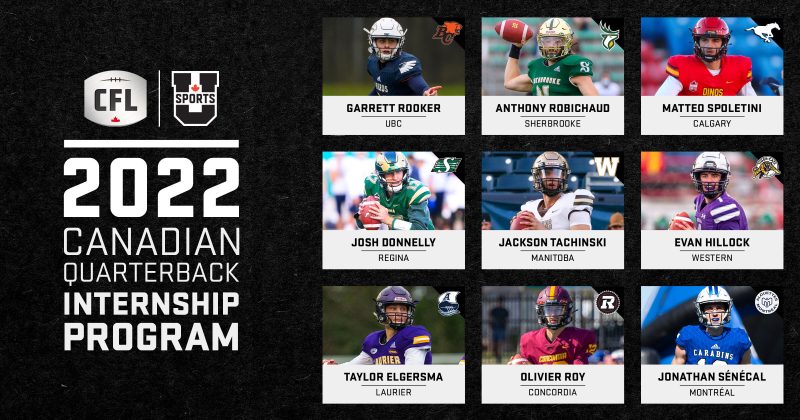 BC | GARRETT ROOKER | UNIVERSITY OF BRITISH COLUMBIA | LEAGUE CITY, TEXAS
Averaging 240 yards per game and the fourth best completion percentage in the country (68.8), Garrett Rooker made the transition from the Friday night lights in the lone star state to Canadian University football look seamless as a rare freshman starting quarterback. Rooker put up 1,437 passing yards in just six regular season games, leading the Thunderbirds back to the Hardy Cup Playoffs. In addition to his eight passing touchdowns, Rooker ran in three more himself.

EDMONTON | ANTHONY ROBICHAUD | UNIVERSITY OF SHERBROOKE | SAINTE-JULIE, QUE.
Anthony Robichaud has been the starting quarterback for the Vert & Or since his arrival in 2019. In his first season, he completed 58 per cent of his passes for 1,141 yards and three touchdowns, while adding 102 rushing yards. In his sophomore season in 2021, the business administration student has showed improvement, completing 68 per cent of his passes for 1,508 yards, registering five touchdowns and accumulating 95 rushing across seven games to help guide Sherbrooke to the Dunsmore Cup playoffs. He passed for 236 yards to help lead the program to its first victory over Laval in their past 35 meetings.

CALGARY | MATTEO SPOLETINI | UNIVERSITY OF CALGARY | CALGARY
Matteo Spoletini is the latest in a strong family line set to make his mark with the Dinos. Following in the footsteps of his father, Tony (1983-86), and brother, Giancarlo (2014-17), Matteo is poised to take the reigns at quarterback for the Dinos this fall. After redshirting during Calgary’s Vanier Cup Championship season in 2019, he saw his first – albeit limited – action last season during the Covid-shortened year, connecting for his first collegiate touchdown early in the season.

SASKATCHEWAN | JOSH DONNELLY | UNIVERISTY OF REGINA | REGINA
Josh Donnelly has put up impressive statistics in two seasons as the University of Regina’s starter. Through his first 12 U SPORTS games, Donnelly completed 189 passes for 2,946 yards and 20 touchdowns, while displaying a deft ability to scramble when needed, notching 37 rushes for 211 yards. Donnelly will become the second Rams quarterback to participate in the Canadian Quarterback Internship Program after Noah Picton took part with the Roughriders in 2017.

WINNIPEG | JACKSON TACHINSKI | UNVIERSITY OF MANITOBA | WINNIPEG
After fifth-year starting quarterback Des Catellier went down with a season-ending injury in Week 1, Manitoba Bisons first-year pivot Jackson Tachinski stepped up, earning four regular season and two playoff starts to propel the Herd to their first Hardy Cup appearance since 2014. In 2021, the two-sport athlete, who is also on the Bisons’ basketball roster, finished sixth in Canada West in passing yards per game with 117.4 and 12th in rushing yards per game with 33.8. Tachinski threw for seven touchdowns and ran for one more in the regular season, before a three-touchdown (two passing, one rushing) performance in the Hardy Cup semifinal against Alberta to send the Bisons a spot to the Canada West final.

HAMILTON | EVAN HILLOCK | WESTERN UNIVERSITY | HAMILTON
Evan stepped into the Mustangs lineup midway through the 2021 campaign and provided an immediate spark. The Hamilton native began his OUA career at halftime of the Mustangs game on October 2 and quickly showed that he had the tools to lead. He claimed the Mustangs’ starting role for the remainder of the season and into a deep playoff run. Hillock was named the OUA Rookie of the Year in 2021, and garnered MVP honours in the Vanier Cup by leading Western to its eighth championship in program history.

TORONTO | TAYLOR ELGERSMA | WILFRID LAURIER UNIVERSITY | LONDON, ONT.
Taylor Elgersma is entering his second season with the Laurier Golden Hawks. The 6’6”, 220-pound quarterback from London, Ont., made two starts and three additional appearances during the 2021 season. He completed 48-of-87 passes for a 55.2 per cent completion rate and three touchdowns, while posting 672 combined yards.

OTTAWA | OLIVIER ROY | CONCORDIA UNIVERISTY | DONNACONA, QUE.
Olivier Roy rose to national recognition during the 2021 season – his first as Concordia’s starter. Roy led the country in passing yards (2,470) and touchdowns (18) en route to being named the RSEQ’s most outstanding player. The third-year pivot was also the fourth-leading rusher in the RSEQ with 45 carries for 318 yards and two touchdowns. Roy orchestrated three dramatic come-from-behind victories during the season and he set an RSEQ and Concordia record by passing for 580 yards in a 42-39 overtime victory over Sherbrooke on September 25. It was the second-best passing performance in Canadian university history.

MONTREAL | JONATHAN SÉNÉCAL | UNIVERSITY OF MONTREAL | MONTREAL
In his first season with the Carabins, Jonathan Sénécal had the best campaign in program history for a rookie. In six regular season games, he threw for 255 yards-per-game and nine touchdown passes. The Montreal native went on to lead his team to its first Dunsmore Cup on home soil. The former André-Grasset Phénix demonstrated extraordinary athletic ability, impressive poise and a wealth of potential in his first year.