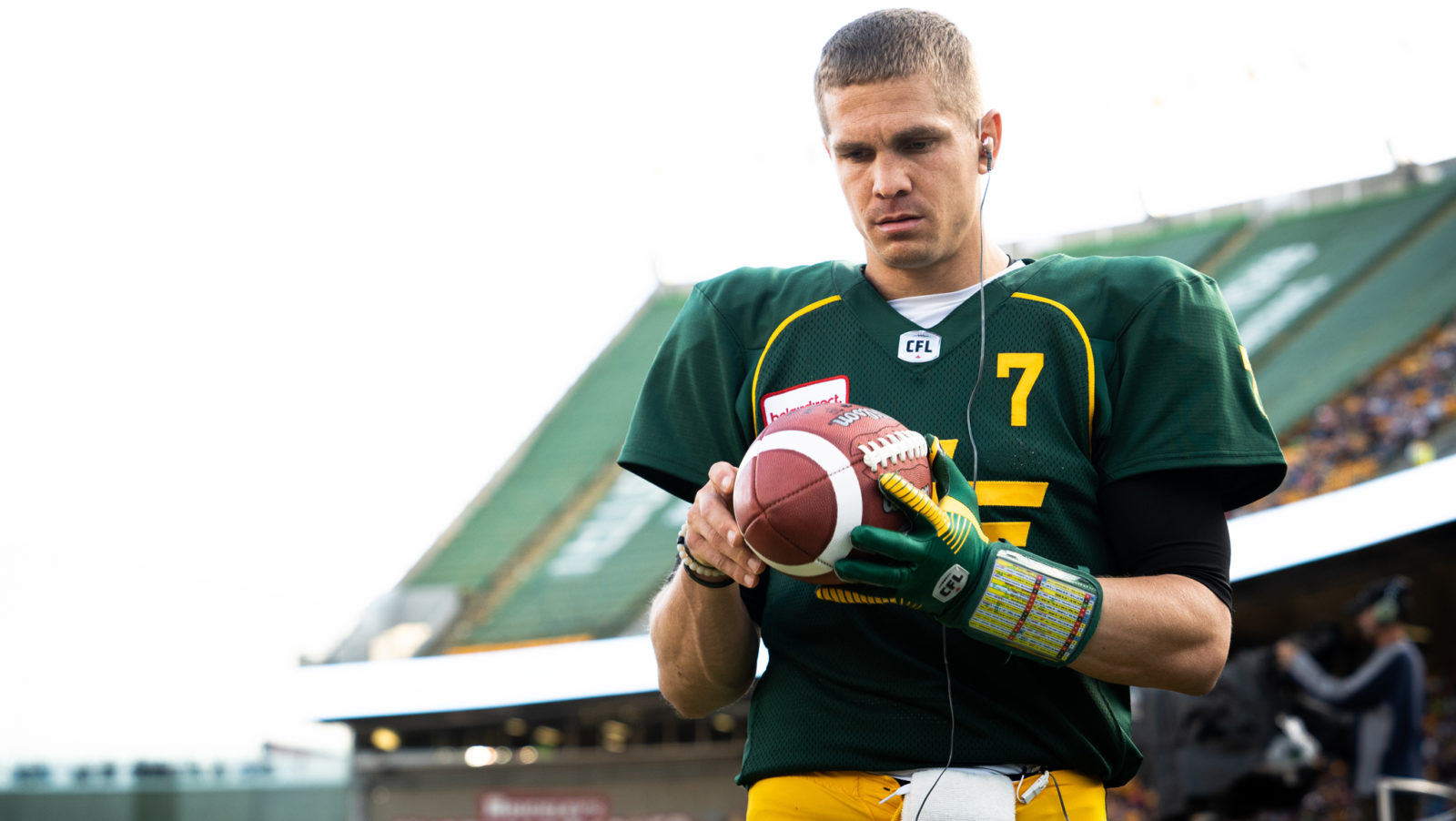 EDMONTON — Even on a disappointing day, Edmonton’s quarterback Trevor Harris still had his sense of humour.

On Monday the CFL announced that there would be no football played in the fall and that the league would be shifting its focus to the 2021 season.

At the end of a video conference call where Harris and offensive lineman David Beard answered questions from the media following that announcement, Harris posed a question of his own.

“I have a question for Dave Beard,” he said. “David, who is your favourite quarterback in the CFL?”

“I knew it! I knew I won you over,” laughed the green and gold’s pivot.

RELATED
» CFL not to play shortened season in the fall
» Cecchini, Als issue statement following cancelled season
» O’Leary: Als confident they’ll be back stronger in 2021
» More on the CFL and COVID-19

It was a welcome change of pace from the rest of the day, which as both players stated, was full of disappointment that there would be no CFL football played in 2020. For the first time since 1919, the Grey Cup will not be presented.

“I would say the overall feeling is disappointment,” said Harris. “Every day you were waking up and working out and thinking about your teammates to motivate you and keep grinding, to work. It’s kind of all for naught. You look at it in that way but you could look at it as we spent this time sharpening ourselves, getting better and pressing on for next year, too.”

“It’s easy to look inwardly and selfishly in terms of how is this affecting me?” said Beard. “What are the hardships or hurdles that I’ve got to step over? But it’s also impacting everyone else too. There’s all kinds of jobs that, not just player jobs, that are not even on the line anymore, they’re gone.

“And there’s people that enjoyed watching and consuming the entertainment that we put out there. We play football but the bottom line is that we’re an entertainment business. And we love playing football for our fans and there are a lot of fans that are disappointed, too.”

Harris, an Ohio native who has played in the league since 2012, says in his time north of the border he’s started to feel like a member of the family, as most fans and players feel around the CFL. He says even though Monday was a somber day, he’s sure there are better days coming.

“Speaking for myself, a nine-year veteran in the CFL and I love Canada,” said Harris. “I love Canadians. I have a lot of Canadian friends that I’ve shared my personal cell phone number with. I feel like I’ve embedded myself as part Canadian and part American. We know this is how a lot of guys feed their families. It unfortunate.

With confirmation that Harris and the rest of the league won’t be stepping on a CFL field this year, Edmonton’s signal caller is going to continue to work on himself, getting certifications in nutrition, personal training and finding different ways of training. He’ll be staying sharp for whenever football will return in Canada.

“I’ve always been an all eggs in one basket kind of guy so this is unchartered territory for me but I’ve talked to quite a bit of people, mentors of mine, talking about things that I can be doing after my playing career that also coincides with what I’m doing,” Harris said. “I have a couple things in the works that I’m going to be doing on the side but my main focus, as always, will be my mental, emotional, physical all those sorts of training for football and bettering myself for my teammates in Edmonton.”

“The CFL is a resilient league,” Harris said. “Like they say, the games are never over and I don’t think the CFL ever will be either, I think we’ll continue to press on.”