Chris Van Zeyl described it as a brief moment of beauty after a very challenging night.

The Hamilton Tiger-Cats’ offensive lineman had eventually dozed off in his car at this time last year as a participant in the United Way of Halton and Hamilton’s Sleepless in Our Cities fundraiser. His eyes opened and the condensation from his breath had crystallized on the windshield just a few inches in front of his face.

“It was crystallized and looked beautiful. I remember waking up and being like, ‘Goodness, I’m cold!’” Van Zeyl said.

Fortunately for him, after eight or nine hours in his car parked in front of his home in Burlington, Ont., Van Zeyl was able to simply get out and go inside to see his three-year-old son Colton and one-year-old daughter, Adelyn.

His efforts raised about $8,000 last year and this year he’s aiming for the $10,000 mark, with his fundraising taking place through social media.

On Feb. 19, @CVZ54 will be spending the night sleeping in his car in support of @UnitedWayHH’s ‘Sleepless in Our Cities’ campaign.

Support Chris and help raise awareness for poverty & homelessness in our community! 👇

Sleepless in Our Cities aims to raise awareness on poverty, unemployment, homelessness and the challenges that many people face through the winter months. Last year, Van Zeyl spent the night in his car through minus-10 C temperatures. An avid hunter that does some ice fishing as well, he’ll be layered up and in a sleeping bag again on Friday night, with similar temperatures and a wind chill waiting for him.

Like last year, he won’t start his car for the duration of the night. He’ll just try to stay warm and will wait for the combination of sunlight and that frosted over windshield to mark the time when he can return indoors.

“It was frigid,” he said of last year’s experience. “I mean, extremely uncomfortable. It’s one of the more uncomfortable things I’ve ever had to do in my life. To think that people have to do that every night for the winter, when it’s cold…it’s tough.”

As uncomfortable as he was in the car, the thought of being in a situation where he and his family were sleeping in the car during the winter really hit home for him.

“I can’t imagine them sleeping on the streets or sleeping in the back of a car,” Van Zeyl said. “It’s an opportunity to raise awareness for people who have to do that everyday.” 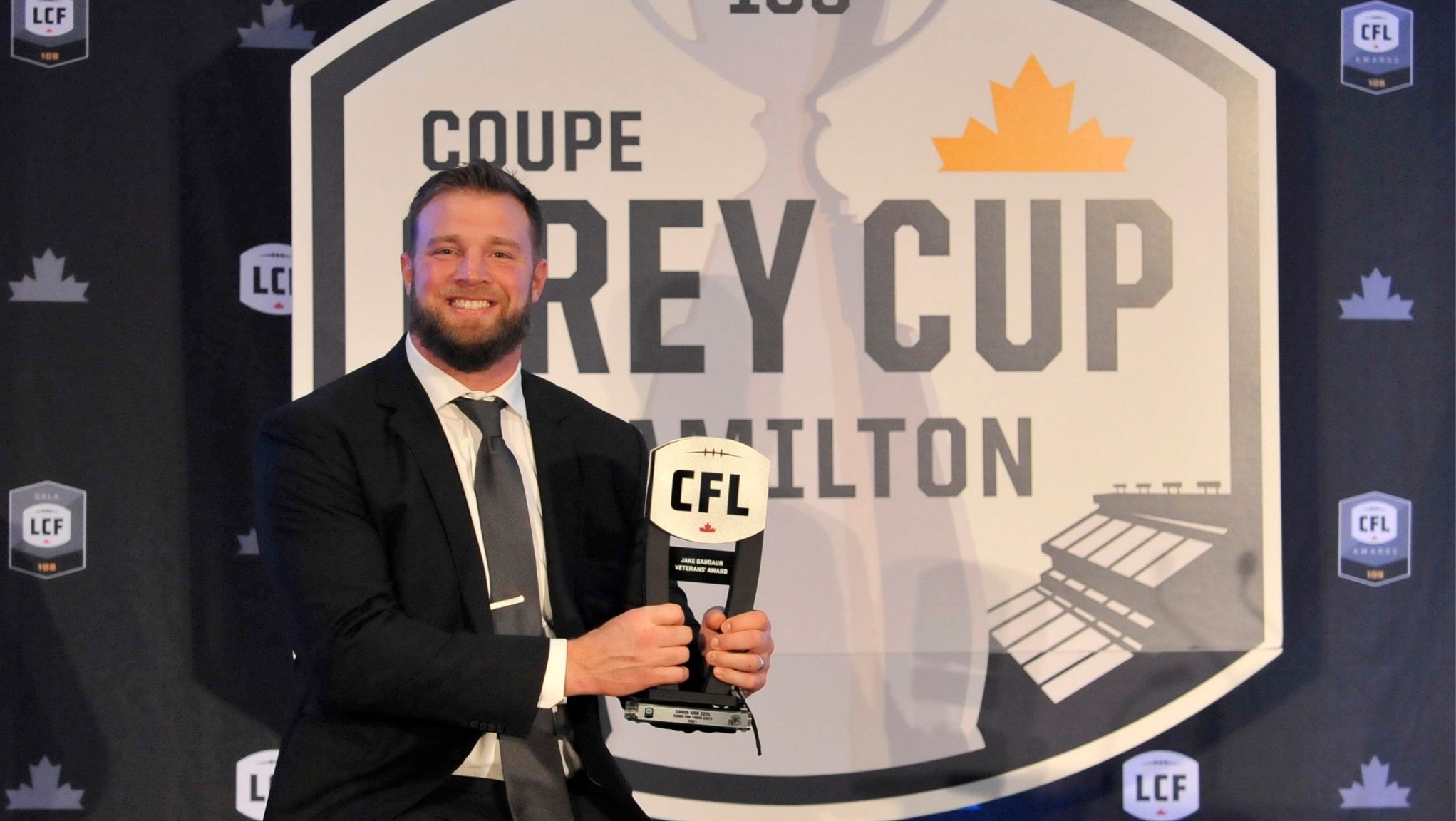 Van Zeyl was recognized for his extensive community work with the Jake Gadaur Veterans’ award in December of 2021 (Simon Wilson/CFL.ca)

A 12-year CFL veteran heading into his third season with the Ticats, Van Zeyl has gone out of his way to take on community initiatives when he was asked. That started with his 10 seasons with the Toronto Argonauts and has spilled into his time playing for his former rivals in Hamilton. The winner of the CFL’s Jake Gadaur Veterans’ award in 2021 – given to a Canadian player that embodies the attributes of Canada’s veterans – Van Zeyl said his parents stressed to him as a child the importance of helping out and giving back.

“I was basically raised close to a church and I was there every Sunday and we had youth ministries and stuff like that, that I was a part of as a young child. (The lesson) was always to give to the community, give back to people in need, that sort of narrative.

“I just kind of brought that along with me. When people ask for help I’m usually there to help. It’s just a call to being a good human being, I think. I try my best to do the right thing when I’m called upon.”

Van Zeyl is taking donations ahead of Friday, Feb. 25, through the United Way Halton and Hamilton. If you’re able, you can donate here.