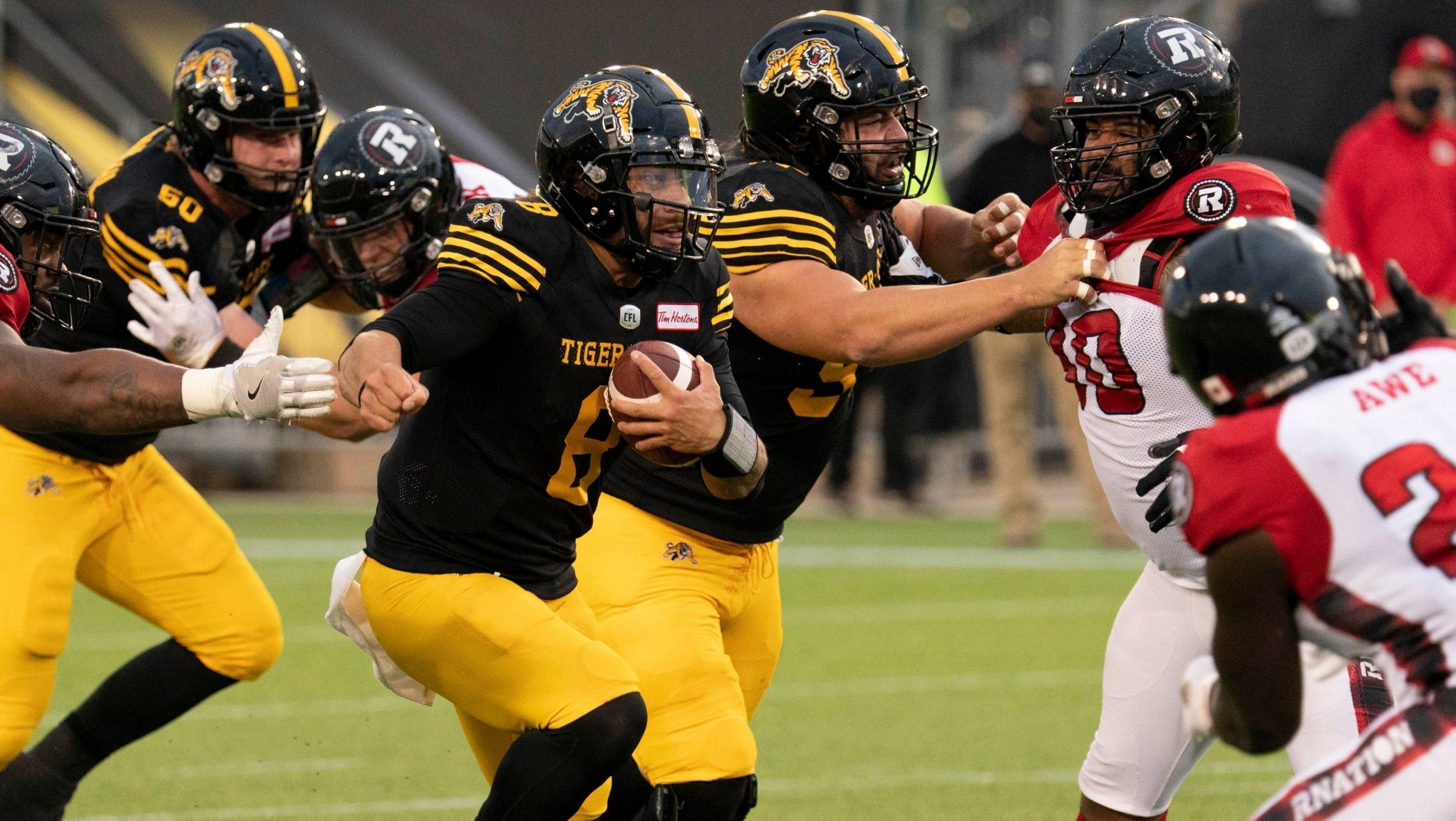 HAMILTON —  It was a dominant performance for the Hamilton Tiger-Cats’ offence as they scored four touchdowns in their 32-3 win over the Ottawa REDBLACKS.

As the playoffs inch closer and closer with each passing week, the margin for error has never been smaller for the Ticats. With their win over the REDBLACKS, the Ticats increased to 5-5 on the season and are right on the Toronto Argonaut’s heels in the East Division standings.

“It was huge,” said Jeremiah Masoli to the media on the gravity of Saturday’s win. “We’re in a race coming down this home stretch. Definitely for myself too, it feels good to get a win.”

Prior to Saturday’s 320-yard passing and two-touchdown performance against the REDBLACKS, Masoli’s last win dated back to the 2019 season. Having it been such a lengthy amount of time in-between wins for him, Masoli savoured the moment.

RELATED
» Ticats down REDBLACKS for fifth win of the season
» Through the Lens: REDBLACKS at Ticats
»  Boxscore: REDBLACKS, Ticats by the numbers
» Watch: Desmond Lawrence’s first-career INT sets up a score

“I hate losing, it makes me sick to my stomach. I’m glad we won,” said Masoli.

In Week 10 against the Toronto Argonauts, the Ticats’ offence looked to be returning to their 2019 season form. With Masoli at the helm, the Ticats offence managed to rack up 470 total yards of offence. Saturday’s performance was even more productive for the unit as they bested their Week 10 yardage with 472 against the REDBLACKS.

“Definitely feels like on offence, were almost getting to hit on all cylinders,” said Masoli on the Ticats’ offence. “I think no matter what, it doesn’t happen without the front. Our O-line did a great job tonight, running back and tight end included, all of our protectors. There wasn’t really too much pressure, that makes a difference.”

Of the areas that the Ticats succeeded the most in was their ability to dominate the line of scrimmage and run the ball against the REDBLACKS defensive line.

After Makeek Irons left the game early in the second quarter following an uncomfortable landing, Jackson Bennett was forced to step up. In his 12 carries, Bennet rumbled for a successful two-point convert and was responsible for 58 of the Ticats’ 135 rushing yards.

“It starts up front,” said Masoli on the Ticats’ run game. “I thought Maleek did a great job running the ball our man ‘Action Jackson’ (Bennett) came in and had some great runs.”

Given the success the offence had, Orlondo Steinauer was proud of the effort they left on the field.

“This was a chance for the offence to step up when the team needed them most and they did it,” said Steinauer to the media. “That’s really what it was, it was time for us to take another step to make a timely play on offence when everybody is counting on it and you don’t know what’s going to happen if you don’t put them in that situation.”

As Masoli did, Steinauer touched on what the win on Saturday meant as the two look to carry this momentum to next week.

“I think it’s extremely important that we win this week,” said Steinauer. “We’re just trying not to look in the past or anything, just handle our business. I want everyone to enjoy this win because winning is not easy and we know we got a short turnout and a travel trip so we’ll have our hands full. I always want people to enjoy it, it’s tough to win.”

The Ticats will make to look it two in a row next week against the Calgary Stampeders as the two clash at 9:45 p.m. ET in the second game of a Friday Night Football doubleheader.