HAMILTON — With their playoff itinerary written for them on Friday night, the Hamilton Tiger-Cats had plenty of reason to punch the clock on Saturday and get on with their postseason plans.

Instead, they took their final regular-season game and seemed to use it as a building block, stepping over the Saskatchewan Roughriders for a convincing 24-3 win at Tim Hortons Field.

The Riders were in a similar spot, having already clinched a home playoff date next week, where they’ll host the Calgary Stampeders. The team opted to rest starting quarterback Cody Fajardo, among other players, allowing vets and banged up players to start to focus on their playoff futures.

When the Ottawa REDBLACKS pulled out a last-minute win against the Montreal Alouettes on Friday, it cemented the Ticats’ home playoff date next week. With the option to rest Jeremiah Masoli, Simoni Lawrence and other players, head coach Orlondo Steinauer instead rolled them out. It sounded like they didn’t want it any other way.

RELATED
» Ticats wrap up regular-season with big win over Riders
» Through the Lens: Riders at Ticats
» Boxscore: Riders, Ticats by the numbers
» Watch: Evans slings it to Banks to increase Ticats’ lead

“I think we were all kind of still mad about how we dropped the ball last week,” Masoli said, referencing his team’s loss to Toronto, which clinched first in the East Division for the Argonauts.

“So it was one of those things where we needed to get back on track before these playoffs get underway and I think you kind of saw that was our intention tonight and we made it happen.”

Masoli was able to put last week’s disappointing showing against the Argos behind him with a strong showing against an admittedly lacking Riders team. In one half of work, he made 17 of 21 passes for 223 yards and a touchdown.

“I thought we had a really good game plan,” Masoli continued, acknowledging the Riders’ sitting some key players.

“We didn’t just show up and see what happened we came with legendary intentions, trying to be great. Guys were able to fire off the ball and run with the ball after the catch, guys were breaking tackles. Don (Jackson) did an excellent job fighting for some of those first downs that we needed.”

It was an ideal entry into the playoffs for the Ticats. Masoli played well and Dane Evans got onto the field and was able to get some good drives in with the offence, finding Brandon Banks for a touchdown pass early in the third quarter to help blow the game 0pen. Lawrence and the defence made life difficult for Isaac Harker and Mason Fine, pulling a pair of interceptions off of Harker. In the first half, Lawrence moved past Rob Hitchcock to become the Ticats’ all-time tackles leader, at 607.

“We wanted to come out here and show our fans what they’re getting…for our (playoff) game. It’s always good to go into the playoffs with a winning mindset,” Lawrence said.

“It’s time to go into playoffs and earn everything else. We gave ourselves the opportunity to be in the postseason and this is what it’s all about.” 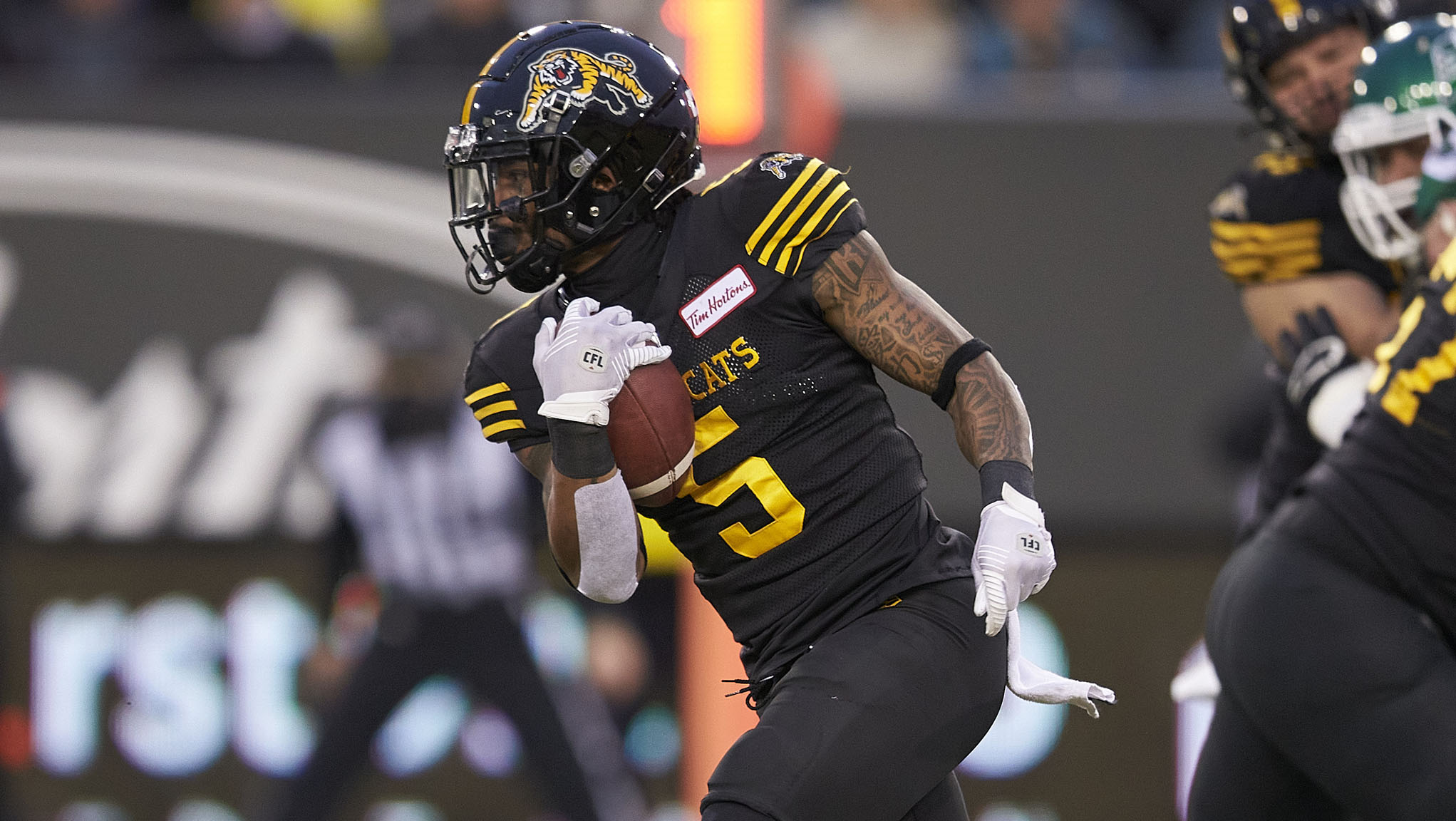 Ticats’ RB Don Jackson had a combined 72 yards, helping the offence roll along in its regular-season finale (Geoff Robins/CFL.ca)

Even if coaches are never satisfied, Steinauer had a lot to be happy about with his team’s eighth win of the season.

“Very excited and proud of the offence coming out after halftime taking the ball down the sticking it in the end zone,” he said.

“That’s something that we’ve done it in the past but maybe we’ve had field goals, or maybe we’ve punted, so that that was good. It was good to see both Jeremiah and Dane do some good things. I thought we ran the ball effectively at times. We’re coaches, we’re never satisfied but I was happy with it.”

For the rumblings that always seem to exist when you have two good quarterbacks on your team, the thing that sometimes gets lost is just that; the Ticats are blessed with Masoli and Evans. Getting both some live reps in a game with no immediate consequence was good for the team as a whole and gives Steinauer every option he’ll want as he preps for Montreal for Sunday.

“I had a lot of fun tonight,” Evans said.

“Tonight was one of the most fun times have ever had playing football, just being back out there, just letting it hang free and going out and playing. But I was really excited about the team, how we all executed. It didn’t matter who was in, who they were playing, who they weren’t playing. We just did our job. We cowboyed up and did the thing. It was a fun night.”