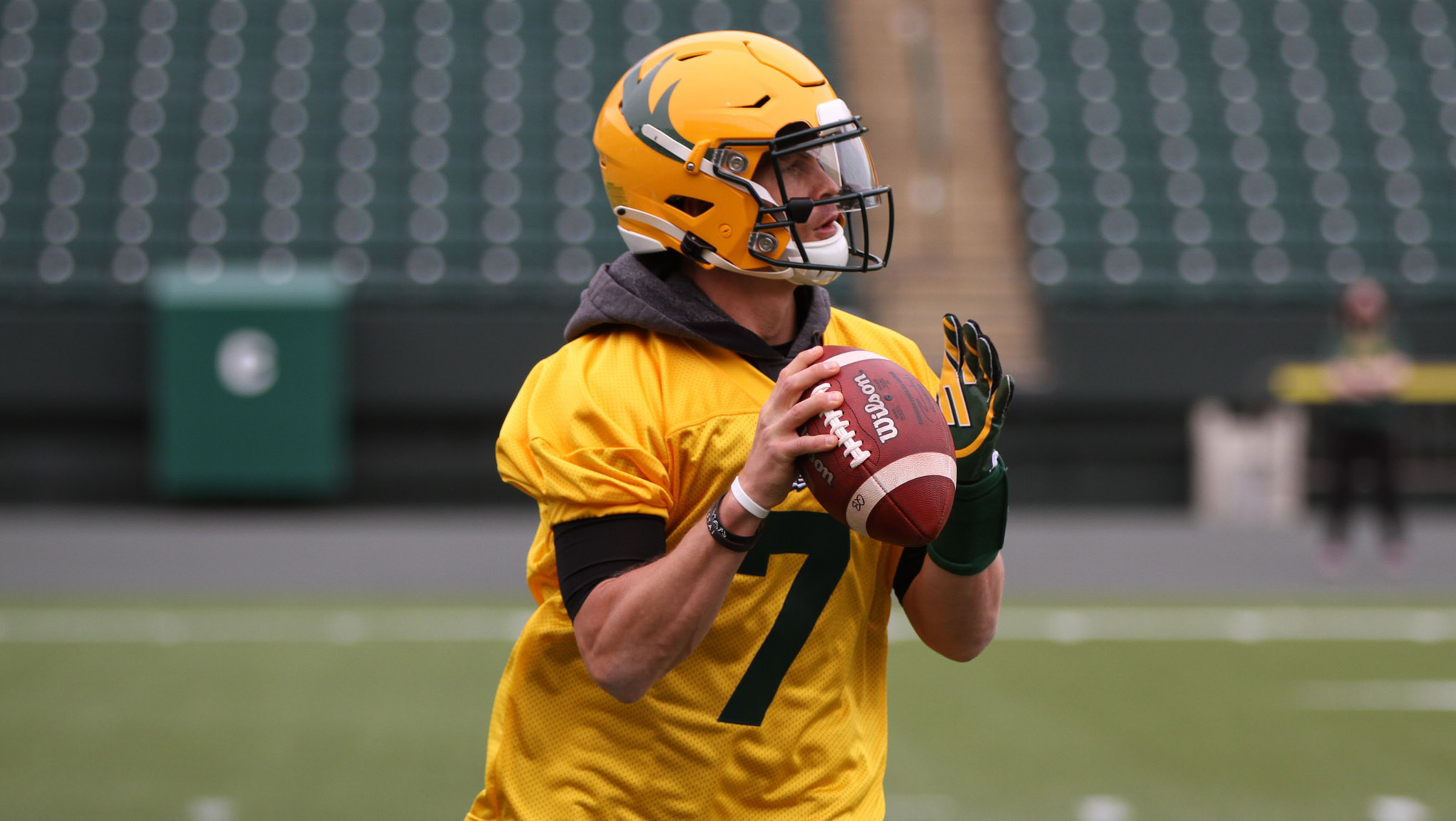 Trevor Harris could have some of the greatest weapons of his career at his disposal this season (Photo: GoElks.com)

Eighteen years ago, an immensely talented quarterback stood on the field at Commonwealth Stadium and surveyed his options.

He looked downfield and saw the likes of Ed Hervey, Terry Vaughn, Jason Tucker and Winston October. If he wanted a handoff, he had Mike Pringle at his hip, ready to tear through the openings that a skilled o-line carved out.

That quarterback, of course, was Ricky Ray and that was just the tip of the talented iceberg that the Elks floated in the 2003 season. It culminated with them winning the Grey Cup and going down as one of the club’s greatest teams ever.

Eighteen years later, October is working as the Elks’ receivers coach and passing game coordinator. The cast is obviously different now, but when you look at the names on the roster: Trevor Harris at QB, Derel Walker, Greg Ellingson and Armanti Edwards at receiver, to name a few, James Wilder Jr. at running back and an offensive line that while battered a little in camp, is deep and should still perform, it doesn’t feel crazy to make the comparison.

“It’s a little different but when you look at the experience, sure,” said October, who handled return duties in addition to his receiver role with that ’03 team.

“We had Pringle, Terry Vaughn and Ed, Jason Tucker and Ricky Ray and the offensive line was pretty solid. When you look at like, James Wilder and Derel Walker, Greg Ellingson and Armanti Edwards, you kind of say,’ ‘Well, OK. You have the potential.’ But you know, potential just means you haven’t done it yet. We still have to mesh, we still have to make sure we’re where we’re supposed to be when we’re supposed to be there, those things.”

A lot has to happen for this present-day group to get to where that special one went 18 years back. All that October, Elks head coach Jaime Elizondo and the rest of the team can work on now is being in the moment. After a year away from football, that’s easier than October thinks it might have ever been.

“It’s the idea of we almost didn’t have this, you know what I mean?” October said of what’s stood out to him the most, almost two weeks into camp.

“It’s been, what, 17, 18 months? Just the appreciation of us…we have more conversations I think about that than about scheme right now. We’re kind of getting to know each other and talking about the things that, you know, what if we didn’t have this? What would we be doing? (It’s) just being appreciative to be on that field and I think that right there is the foundation for us to play hard for the next guy.

“That’s what (training camp) has been, just an appreciation of the fact that a lot of us have been playing since we were 11. I’ve been in football since I was in the sixth grade and I’m 45 now. I’ve been all around football. That’s why I like this group, because of that.”

October sees a more joyous camp than ones in years past. Players might be a little more coachable than they were previously. It’s something that we should all be able to relate to on some level. Before March of 2020, there were so many aspects of our lives that we couldn’t help but take for granted. Going to a friend’s place to have dinner and watch a game; sharing a locker room with your friends for your weekly pickup run; sitting elbow-to-elbow with strangers in a stadium to cheer your team on. The fundamentals of our lives have been upended for almost a year-and-a-half and we’re only now starting to get these things back. At Commonwealth Stadium, that’s spilling out onto the field every day. 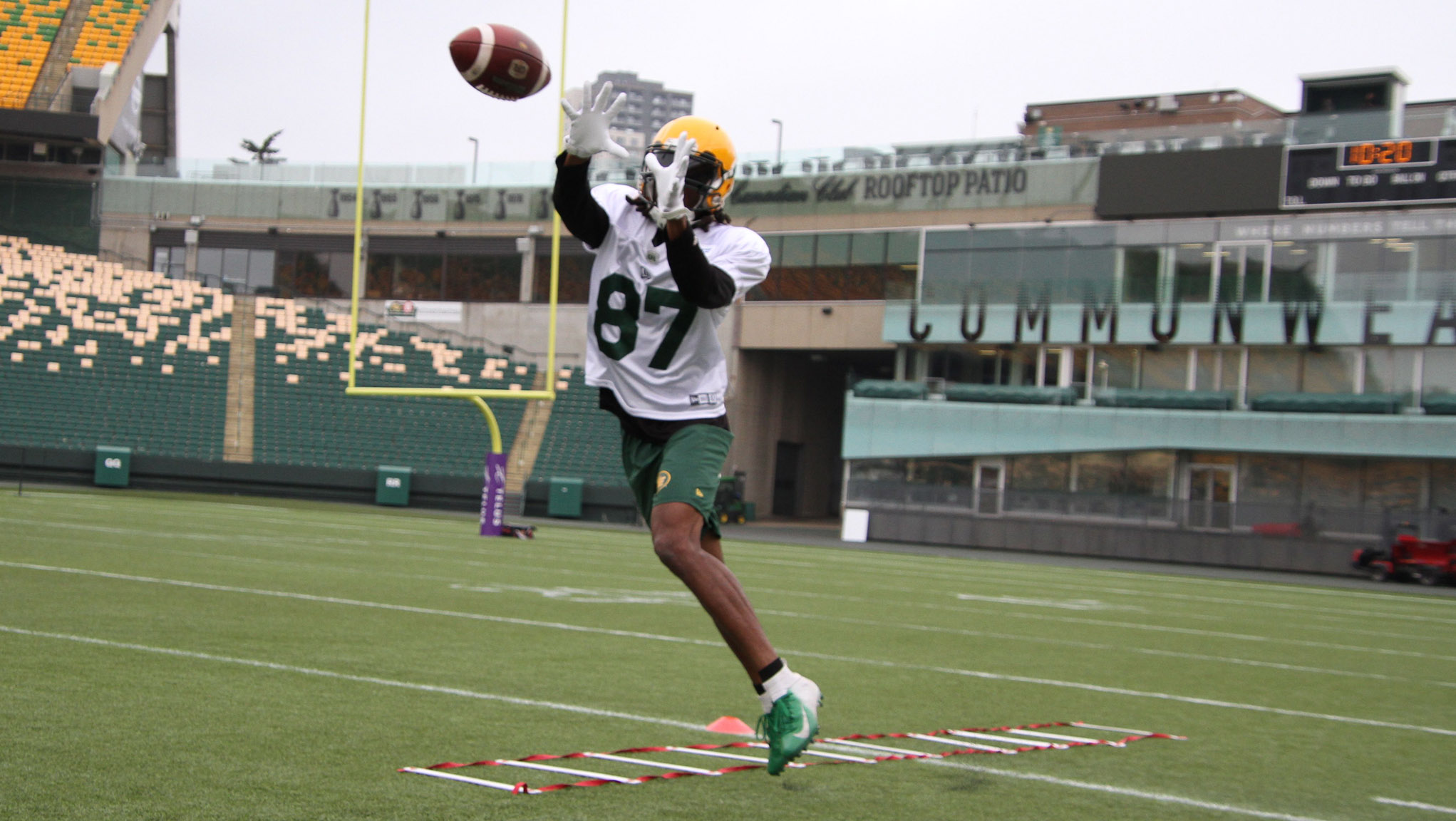 Having joined the team this week after quarantining, Derel Walker is poised to have a monstrous season playing with Trevor Harris (Photo: GoElks.com)

“We talk about it all the time. There’s thousands of guys that would love for the opportunity just to play professional ball and we have that opportunity. So we all got to go through this, grind, these days and give your best effort,” October said.

The ’03 comparison is a nice one, but October also looks back a little more recently in his career and thinks this offence could be similar to what Ottawa had back in 2018, when he was in his first year with the REDBLACKS as their receivers coach. He remembers Harris’ seemingly endless chemistry with Brad Sinopoli, with Ellingson, R.J. Harris and with Deontae Spencer. That group and the old Edmonton one had something in common.

“There were no egos in our room,” he said.

“When a guy ran the wrong route, we all jumped on him. (When) there’s no egos it’s easier for us to play free. You’re not worried about the next guy getting his shine because when one shines we all shine.

“You can’t live in the glory days, but you use those as benchmarks. Then you just live in the present and bloom where you are right now.”

The Elks go into this season with an offence that’s great on paper, full of talent at every position. They’ll have 14 games to find their way and see how good they can be together. That 2003 team found its bond as a group when it was stuck in Toronto during the infamous blackout that shut the city down for days. Emerging from a pandemic, getting football back and appreciating the little things in a way none of us could before could be the thing that pulls this present-day group together.

“If anything, I’m excited to be back playing and coaching and building that camaraderie,” October said.

“I think that’s the most exciting part right now. We’re excited for August 7.”