TORONTO — Teams searching for impactful, long-time Canadian starters know that their best chance comes in the first round of the CFL Draft.

Since 2014, only six players drafted have started 60 or more games. All six were first round draft picks, along with Ticats’ offensive lineman Brandon Revenberg, who just misses the mark with 58 career starts.

That doesn’t mean there aren’t hidden gems outside of Round 1. Taylor Loffler, Kwaku Boateng, Jamal Campbell, Shaq Johnson, and Sean Thomas-Erlington headline an impressive list of draft day steals in the third round and beyond, proving that the later rounds aren’t simple reserved for special team hopefuls.

The history of the CFL Draft shows just the same, with later rounds producing names such as Dave Ridgway, Brad Sinopoli, and Jon Gott.

CFL.ca looks at some of the biggest draft steals ever:

RELATED
» Five standouts from the CFL regional and national combines
» Steinberg’s MMQB: Longevity key in HOF careers of Steinauer, Lewis
» O’Leary: The story behind the Keeper of the Cup’s children’s book 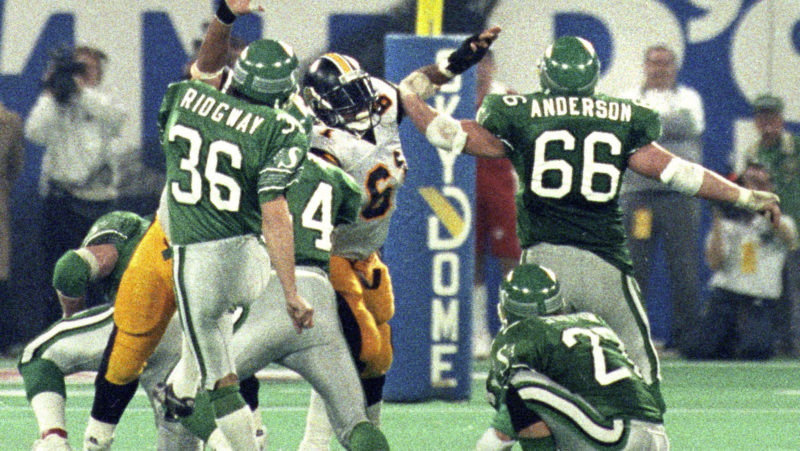 Forever enshrined in Riders’ history for his game-winning field goal kick in the 1989 Grey Cup, Dave Ridgway was a Canadian draft pick that panned out (Photo: The Canadian Press)

Despite being drafted by Montreal in 1981, Ridgway will always be remembered as a Roughrider. Famous for his 1990 Grey Cup winning field goal vs. Hamilton, the Toledo product played 238 games in 14 seasons after being drafted 58th overall (7th round) in 1981. A seven-time Division All-Star and six-time CFL All-Star, Ridgway was inducted into the Canadian Football Hall of Fame in 2003. His 60-yard field goal in 1987 remains the second-longest in CFL history.

After winning back to back Grey Cups — including Most Valuable Canadian in 1996 — Mike Vanderjagt headed south where he became the NFL’s most accurate kicker. Long before famously kicking a 46-yard field goal on Letterman (following his role in an NFL playoff loss), Vanderjagt was the 58th overall pick by Saskatchewan in 1992. His CFL career was short but successful, with 56 regular season games in four seasons, two Division All-Star selections, and one league-wide honour.

One of the longest tenured players in CFL history, Osbaldiston played 304 games for BC, Winnipeg and Hamilton from 1986 to 2003. He was drafted in the seventh round (63rd overall) in 1986, appearing in four Grey Cups including the Ticats’ most recent championship in 1999. Osbaldiston currently ranks fourth on the league’s all-time scoring list with 2,932 points, and holds several Ticats franchise records including games played and points scored. 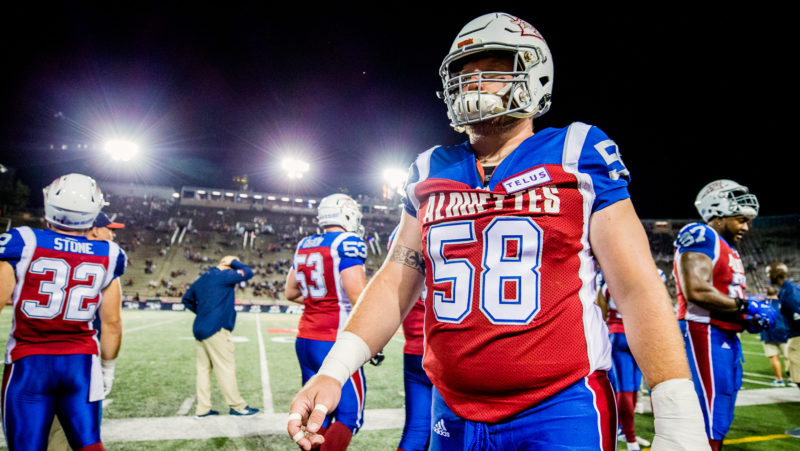 A late pick in the 2008 draft, Luc Brodeur-Jourdain became an integral part of a pair of Grey Cup-winning Alouettes teams (Dominick Gravel/Montreal Alouettes)

A sixth round pick (48th overall) in 2008, Brodeur-Jourdain quickly became an important part of the Alouettes’ plans, playing in both of the team’s back to back Grey Cup Championships in 2009 and 2010 — including a starting assignment in 2010. The centre and guard retired in 2019 with 168 games, all with the Alouettes, including 127 starts. Brodeur-Jourdain was a two-time Division All-Star and one-time CFL All-Star.

Brown quickly became a special teams ace for Edmonton, including an unheralded role in his team’s 1993 Grey Cup Championship with a pair of special teams tackles and a fumble recovery. A sixth round draft pick (41st overall) in 1989, Brown played 129 games in eight seasons with the Green and Gold, recording 105 special teams tackles — good for 40th all-time today. He was named a Divisional All-Star twice and a CFL All-Star once.

Drafted in the sixth round by Ottawa in 1985, Chomyc played all 156 games with the Argos over nine seasons from 1985 to 1993, including a Grey Cup Championship in 1991 and another appearance in 1987. The University of Toronto product was a three-time Division All-Star and two-time CFL All-Star. Chomyc remains the Argos’ all-time club leader with 1,498 points, including a franchise record 236 points in 1991 when he kicked 55 successful field goals.

Comiskey saw both sides of the Battle of Alberta, in addition to stints with Hamilton and Saskatchewan during his 13-year CFL career. A two-time Division All-Star on the offensive line, Comiskey appeared in four Grey Cups, highlighted by a run of three in four years with Edmonton from 2002 to 2005. Drafted in the sixth round (42nd overall) by Saskatchewan in 1997, Comiskey started 169 of 178 career games.

Famous for inspiring one of the CFL’s great rivalries, Westwood had many other contributions to the three-down game. Drafted 48th overall in 1991, the Bombers’ kicker went on to play 293 games in 18 seasons with Winnipeg, including four Grey Cup appearances, three Division All-Star honours and one CFL All-Star selection. Westwood remains Winnipeg’s franchise leader in points (2,748) and fifth in CFL history. His streak of 279 straight games is the second longest in history behind only Bob Cameron. 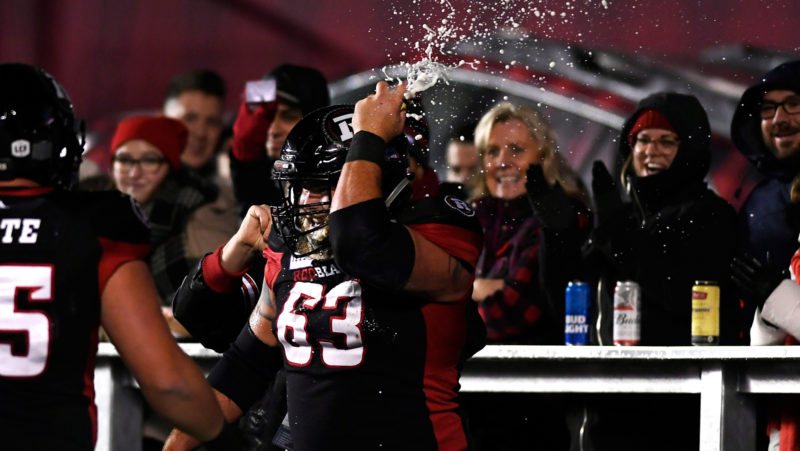 Jon Gott was one of the league’s top o-linemen and helped the REDBLACKS to the 2016 Grey Cup, while providing one spectacular viral moment for Ottawa and CFL fans (Photo: The Canadian Press)

The Stampeders got plenty of value for their 35th overall pick (5th round) in 2008, as Gott would go on to play 145 games (including 116 starts) with Calgary and Ottawa, earning three Division All-Star nods and two CFL All-Star selections. After appearing in the 2012 Grey Cup with Calgary, Gott was traded to Ottawa, where he became a central piece in the REDBLACKS’ emergence from expansion team to perennial contender, culminating in a championship against his former team in 2016.

A Regina native and product of the Regina Rams, Getzlaf became a local icon for the Saskatchewan Roughriders after starting three Grey Cups, including an historic victory at home against the Ticats in 2013. Getzlaf started 133 of his 147 career games throughout 11 seasons with Hamilton, Edmonton, and Saskatchewan, earning two Division All-Star nods in the process. Not bad for the 33rd overall pick (5th round) in 2007.

Initially drafted 37th overall (fifth round) by Saskatchewan in 1981, Vic Stevenson went on to play 258 games in 16 seasons with Saskatchewan, Montreal, BC, Edmonton, and Toronto. He appeared in three Grey Cups and was a three-time Division All-Star and one-time CFL All-Star. Stevenson retired in 1998. His best season was in 1992, when he was named the West Division Most Outstanding Offensive Lineman for Saskatchewan.

McNeil was a cornerstone on the Stampeders’ O-line for 14 years, playing 223 games while earning six Division All-Star selections in addition to three league-wide honours. A 34th overall selection (fourth round) in 1994, McNeil played in four Grey Cups, including championships in 1998 and 2001. McNeil was the West Division’s Most Outstanding Offensive Lineman in 2001, and won team honours six times in a seven-year span from 2001 to 2007.

A 29th overall pick in 2011 by Calgary, Sinopoli showed off his multiple talents while making the full-time transition to receiver. Upon signing with Ottawa in 2015, where he had previously quarterbacked the Gee-Gees, Sinopoli recorded four straight 1,000-yard seasons and appeared in three Grey Cups — including a stunning overtime victory over heavily favoured Calgary in 2016. Sinopoli’s 116 catches in 2018 tied the seventh highest single season total ever. He is a three-time Division All-Star and one-time CFL All-Star, and a former Hec Crighton winner at quarterback.