TORONTO — As Chris Streveler was getting ready for the playoffs last year, he had more on his mind than just trying to help the Winnipeg Blue Bombers win the Grey Cup.

Along with dealing with an injury, the 25-year-old was also told that some NFL teams had started to take notice of the second-year Bomber.

“I didn’t really even realize that the NFL was going to be possibility until kind of getting into the playoffs last year,” Streveler told Donnovan Bennett on this week’s episode of The Waggle presented by Sport Clips.

“My agent had hit me up and said that some teams were inquiring about a post-season workout. They were interested, which was kind of interesting for me going into the playoffs, it was pretty well documented was dealing with an injury. That kind of made things a little bit trickier and different once I was able to get into workouts.”

Despite the injury that he was dealing with, Streveler still suited up in both playoff games and the Grey Cup as the tandem of he and Zach Collaros aided in the Bombers breaking their long-standing drought.

“It wasn’t hard to focus at all because while I was really excited about the opportunity with the NFL, I was so invested with Winnipeg and that was my main goal,” he said. “Honestly, I told my agent, because we had a conversation, (and he said), ‘well, obviously you’re dealing with an injury so maybe you shouldn’t play to get ready for these workouts.’ I was kind of like, ‘no, I’m not doing that. I owe it to my teammates, I owe it to myself to see this thing through. If I’m going to be able to get out and play for these playoffs, I want to be able to do it, regardless of how that’s going to impact these NFL chances.’”

“Winning that Grey Cup was one of the best feelings I’ve ever had in my life,” he continued. “Probably one of the things that I’m most proud of in my whole athletic career so I wouldn’t change anything about the way I went about it.”

He finished the regular season completing 156 of 234 passes for 1,564 yards, eight touchdowns and 14 interceptions. But it was his ability to rush the football that he excelled. Streveler tallied 127 carries for 726 yards and 12 major scores during his 17 regular season games.

“It was tough to leave,” admitted Streveler when asked about Winnipeg. “(I) had a lot of good relationships there with teammates, coaches, obviously the fans are super passionate there. It was hard to leave that whole atmosphere but couldn’t be more excited about being down here and the opportunity to be with the Cardinals and help out in any way that I can.” 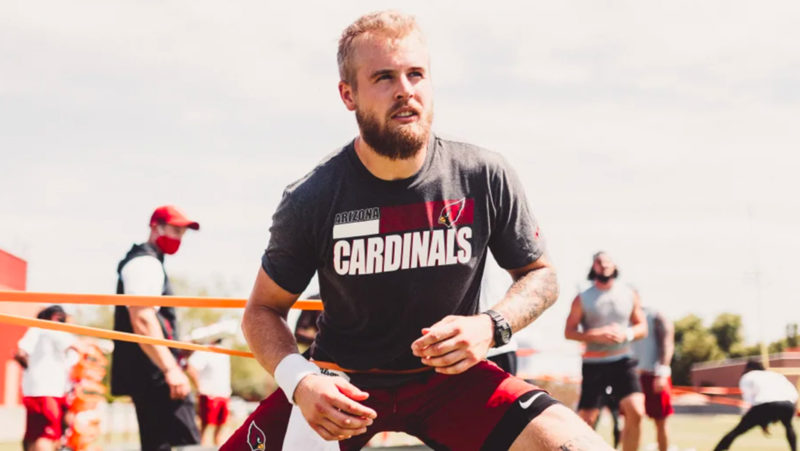 As Streveler transitions from the CFL to the NFL, he says one of the biggest takeaways he got from his two years playing the Canadian game was learning how to be a professional player by spending time in a locker room with veterans; he credits the likes of Matt Nichols, Weston Dressler and Darvin Adams as leadership influences.

“Obviously my game continued to progress when I was up there,” he said. “You play two years at the professional level you’re going to get better, you’re going to improve, you’re going to feel more comfortable. Even more so, I feel like I improved just as a professional and how my mindset going in there every game. The way that I approached my film work. The way that I took notes. Everything just continued to progress and it gave me the tools to have a chance to get more opportunities down here (NFL) just because I knew what it was like being in a professional locker room. I knew how to carry myself coming in and how to prepare on a week-to-week basis.”

“Just thank you and I hope that you guys know, and those people know, and everyone’s that been involved with the CFL in Canada knows how much I appreciate my time up there,” he said when asked what message he wanted to give CFL fans.

“I wouldn’t have gotten the same opportunities down here without my time up there and I wouldn’t be the same person. I wouldn’t be the same player without all that stuff. These two years completely changed my mindset, changed the way I approached the game. It made me a professional and the fan support, it’s so cool to see. I hope everybody knows how much that means to me.”